KIGALI and JOHANNESBURG, Jun 8 2010 (IPS) - The vast majority of businesses in Rwanda – like elsewhere in Africa – are informal. Government expects that a drive to register an estimated 900,000 informal enterprises will both strengthen these businesses and improve tax revenues. 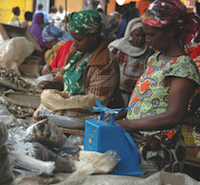 She earned enough to sustain her family, but she was inspired to form a cooperative after attending a training programme aimed at empowering entrepreneurs.

Now as part of a ten-woman cooperative, she says her earnings have dramatically improved. Registering the cooperative as a formal business helped the women apply for a loan of one million Rwandan francs (about $1,700) with which they plan to expand their business further.

Suzan Nyirangwije who sells products imported from Dubai, has also seen positive returns since registering her business and receiving a loan.

“When I was running an informal business by myself, my daily turnover was very low but with my colleagues the shop now does over 300,000 Rwf ($500) worth of business every day,” she said.

“We have seen that once they have experienced successful business performance, people in the informal sector almost always want to extend their activities,” Kabera explained.

Women comprise 54 percent of Rwanda’s population of nine million. Although there are no statistics available for women-owned businesses, the Rwandan government acknowledges that the majority of employees in both the formal and informal sectors are women.

The registration effort focuses on enterprises earning a minimum daily income equivalent to $20 and makes the process of registering as short and simple as possible. The costs have also been drastically reduced, from the equivalent of about $600 to just $43.

One of the key objectives of the Rwanda Development Board, the agency tasked with the registration process, is the sensitisation and mobilisation of women to invest in doing business.

But registration does not automatically guarantee loans for women-owned businesses. Many women in rural areas complain they still face difficulties in accessing loans under the Women’s Guarantee Fund , established last year.

Officials have dismissed the women’s concerns. “The government has established the necessary mechanism on micro loans for all financial institutions that lend to female entrepreneurs,” François Kanimba, the governor of the Central Bank told IPS in a 2009 interview.

At the time, the Central Bank reported that 6,568 women had benefitted from the credit scheme, drawing loans from $900,000 provided by government, international donors and NGOs.

Strengthening the economy as a whole

Government also plans to use the business registration scheme to develop a database of business activities that will contribute to economic planning. A key Rwanda government target under its economic roadmap, Vision 2020, is to reduce the country’s dependency on aid by increasing tax revenue.

When the Foreign Investment Advisory Service, a joint service of the International Finance Corporation and the World Bank, assessed Rwanda in 2005, the country’s 400 large firms and 3,000 registered small enterprises were hugely outnumbered by the estimated 900,000 firms in the informal sector. Registering these firms is one of the avenues government is using to boost the tax base.

But many informal sector workers find the prospect of paying taxes intimidating and it remains to be seen to what extent the business registration scheme will convince women in the informal sector to formalise their businesses.