RAFFINGORA, Zimbabwe, Aug 14 2010 (IPS) - Mavis Muchena sits on the veranda of her mud hut, a middle-aged single mother of four with a face worn beyond her years and hands creased from working the soil. She should represent the future of a renewed farming boom in Zimbabwe, but instead she represents its failure. 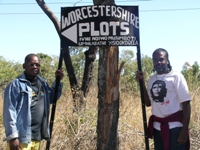 Muchena and 100 others arrived at Yomba Farm, near Raffingora some 150 kilometres west of Harare, six years ago from rural Guruve. Armed with machetes and rifles, they threatened to kill the farmer if he interfered with their takeover. This was during the height of Zimbabwe’s forced, chaotic and uncoordinated land grabs.

Yomba Farm, which used to be owned by the Nicolle family, was one of the biggest farming enterprises in the country before the invasions. The cotton the farm once produced contributed 15 percent of the total national cotton requirement and the wheat produced added up to 10 percent of the national requirement.

But since Muchena grabbed her piece of the farm, she has not even utilised 10 percent of her plot. She holds about 100 acres of the land she grabbed, and which was later allocated to her by government. Since invading the farm, she has only managed to use less than 10 acres, planting cotton, maize, soybean, sunflowers and some groundnuts.

And Muchena’s failure is widespread in the region. Research commissioned by Southern African Confederations of Agricultural Unions, released in March found that there have been widespread failures in land reform processes, most particularly in South Africa and Zimbabwe. According to the research findings land reform processes are seldom, if ever, adequately funded. This leads to situations of conflict over limited resources.

Land is a challenge for all farmers but the type of challenge is country specific as governments play a key role and farmers have limited power even when they are organised.

The report also stated that while some countries are addressing land challenges, this is not yet widespread. There is lack of common vision in some countries on the role of the agriculture sector and the function of the available land.

The main challenges to land reform, according to the report, are land scarcity driven by increasing population, competition for land because of economic development, poorly endowed countries, and countries with unstable land ownership patterns.

The report also stated that tenure reform is more important than land reform in many countries.

The report stated that land administration requires strong management systems, including staff capacity and that managing land grabbing was important.


Muchena claimed that her efforts to farm are being hampered by lack of: inputs; financial resources; irrigation; technical and farming implements. Muchena does not have fertiliser, and has few seeds for planting, enough only for half an acre.

“I came here with no money. I wanted to start a new life. Government promised inputs as well as tractors. But till now, nothing has happened,” she says. When she and the other invaders took over the farm they also took the farming implements. But these fell to disrepair as the invaders were unable to utilise them as they required investment in fuel, servicing and technical knowledge.

“Yes our production is well below the farm’s capacity. But without the necessary inputs, equipment, commercial farming skills, we remain at this level,” Muchena admits.

It is what happened on Yomba Farm and now the once-thriving land has become barren, marked by poverty-stricken communities.

This is a clear indication of the dearth of agriculture in this former Southern African bread basket. Within the region land reform has been met with mostly dire results, which include failure, and widespread violence as well as failure to stimulate the broader economy.

Studies confirm that despite the need for land within the region, its relationships are complex and vary widely between countries.

Dr. Michael Aliber of the Institute for Poverty, Land and Agrarian Studies at the University of the Western Cape, says land is an emotional and complex issue, a fundamental factor of production that must be utilised productively.

“There must be value attached to redistributed land. Many beneficiaries complain that it is difficult to obtain credit as they don’t have title deeds to the land they work on,” Aliber says.

He added that formalising tenure and offering title deeds does not ensure immediate access to credit. “If the loan is not repaid, to what extent will the title deed be marketable? The title will have little value if there is no land market,” Aliber says.

Professor Sam Moyo director of the African Institute for Agrarian Studies in Zimbabwe thinks the failure by some of these projects are due to lack of pre- and post-settlement support, that includes technically equipping the framers before moving in as well as providing financial and material support.

This chaotic and violent seizure of white-owned farms has come at a price, the economy collapsed. The land program, coupled with severe drought, has left half the population in need of emergency food. Mugabe has failed to transform the agricultural sector into a viable system that can feed the nation and drive the economy.

Corruption within government structures has seen some of the agricultural implements being channelled to the politically connected instead of the needy farmers.

The redistribution project has meant that agricultural output has declined nearly 75 percent in the past three years.

“Zimbabwe is not alone,” Moyo continues. “The current land reform model in South Africa is not sustainable, either socially or politically.”

“It is therefore important to review the developmental approaches used. Farmers’ movements should be at the centre of defining policy, since small-scale farmers are important in ensuring social and economic inclusion,” he says.

Moyo explains that the “willing-seller, willing-buyer” program in South Africa has not proceeded fast enough, partly because white farmers have artificially inflated prices of their landholdings. In 1994 South Africa promised a radical redistribution of agricultural land, which was supposed to transfer 30 percent of white-owned farms by 2014.

Almost 16 years later, they have transferred less than five percent. And most of these farms owned by emerging farmers are in dire straits and not productive.