KATHMANDU, Oct 3 2010 (IPS) - For the last two climbing seasons, Dawa Sherpa has missed scaling the summit of Mt Everest. But the climate ambassador for the World Wildlife Fund (WWF) and two-time Everest summiteer may not be relishing the thought of bearing witness once more to the impact of rising temperatures on the world’s highest peak. 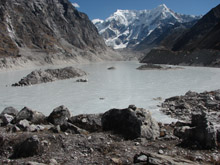 The Tso Rolpa glacial lake in central Nepal has grown due to the faster melting of snow with global warming. Credit: Kishor Rimal/IPS

Indeed, he says that even making one’s way just up to Base Camp, which lies at an altitude of 5,380 metres, can already give one the dismal view of the devastation climate change is wreaking.

“Snow cover in the mountains is decreasing, crevasses are opening up in the glaciers,” says Dawa. “Avalanches (have been) occurring frequently (in) the past two years.”

In 2010, one of his Sherpa staff lost his life to an avalanche. Dawa also recalls Appa Sherpa, the 20-time Everest summiteer who has been climbing Everest since 1990, as saying last year that he has seen small puddles of water even at an altitude of 8,000 metres.

Melting glaciers and receding snowlines, however, are just among the many manifestations of climate change in this tiny Himalayan nation.

“The apple-growing belt in the Mustang district is gradually shifting to higher altitudes,” says Baral, who writes frequently on climate change, because warming temperatures have resulted in their fruits getting worms. “People there claim that while they could easily produce healthy apples as low as Lete (2,480 metres) until a few years ago, the apples now tend to catch worms even in higher altitudes like Larjung (2,550 metres), Kobang (2,640 metres) and Marpha (2,670 metres).”

Mustang is located near the Tibet border. Recently, a village there was dubbed as Nepal’s first ‘climate refugee village’.

Efforts are now underway to resettle the entire village of Dhe to a lower area of Mustang. Among other things, the sources of water there are drying up, while the flora in and around the area have been vanishing fast, leaving the villagers’ cattle herds and other grazing animals with little to eat.

According to the English-language national daily ‘Republica’, which broke the news about Dhe in June, “(a) total of 150 people (23 households) …are being shifted due to the adverse impact of climate change on the livelihoods of the poor in the village”.

“Dhe village has been facing an acute shortage of water for irrigation over the last six to seven years,” it added. “The irrigated land over the period has also been reduced to less than 50 percent and animal husbandry (particularly goat keeping) has declined by 40 to 45 percent.

The irony is that Nepal itself is said to contribute next to nothing to climate change, which is traced by experts to greenhouse gas emissions of countries around the world.

China and India, which sandwich Nepal, in fact happen to be two of the world’s fastest industrialising and highest carbon dioxide-emitting countries.

Earlier in 2010, though, those who have expressed doubt that climate change is real had a field day when the United Nation’s Intergovernmental Panel on Climate Change (IPCC) announced it had made a mistake in saying the Himalayan glaciers may be gone by 2035. The climate-change sceptics took this as yet another piece of evidence that much of what had been said of the global phenomenon had been nothing but hysterical hype.

But IPCC has clarified that while it had made an error on the date, it did not make a mistake about the melting away of the Himalayan glaciers.

Madan Shrestha of the Nepal Academy of Science and Technology also remarks, “We have ample scientific evidence to prove that climate change is causing the Himalayan glaciers to retreat.”

Shrestha has been studying Nepal’s glaciers since 1974, when he was a part of the Glaciological Expedition to Nepal (a joint effort of Japan and Nepal).

He says that he was shocked beyond belief to see a picture taken in October 2009 of the Yala glacier (5,100 metres to 5,700 metres) in Lamtang area in central Nepal. Comments Shrestha: “The photograph was evidence of the fact that the glacier’s mass had decreased and there was a significant terminus retreat.”

A comparative analysis of photographs taken during different time periods clearly reveals that the fate of other glaciers such as AX010 (4,950 metres to 5,390 metres) glacier in Shorong mountain in East Nepal is no different, he adds.

Shrestha says, though, that since Nepal’s contribution to global climate change is minimal, there is not much it needs to do in terms of mitigation. “As a token response to international efforts we should voice our willingness to be a part of mitigation efforts,” he says, “but our focus has to be on adaptation”.

By that, he means introducing heat-resistant crop varieties and working to strengthen the dam structures so that they can withstand increased water pressure, among other thing. He says that Nepal can take a cue from Bangladesh, which has already introduced a flood-resistant variety of rice.

“It is high time we factored in climate change in our development discourse,” says Shrestha. “This has simply been not happening.”

*This IPS story is part of a series supported by the Climate and Development Knowledge Network http://www.cdkn.org