PERU: A Highway Built to Be Flooded

PUNO, Peru, Oct 19 2010 (IPS) - Construction workers are fighting the clock to finish the last stretch of the Southern Inter-Oceanic Highway, in southeastern Peru, apparently unaware that about 100 kilometres of this road connecting to Brazil will be covered by water once the Inambari hydroelectric dam is built nearby. 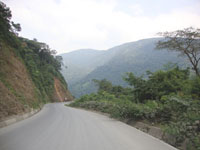 A stretch of new highway to be flooded by the Inambari dam near Puno, Peru. Credit: Milagros Salazar/IPS

The residents have yet to be convinced that an alternative route can be built for this highway for which they fought so many years.

Heavy machinery goes back and forth, carrying tonnes of soil. Some younger workers, wearing helmets and overalls, control traffic in the area with hand- held “stop” and “go” signs.

The project, part of the Initiative for the Integration of Regional Infrastructure in South America (IIRSA), is moving full steam ahead in order to meet the government’s pledge to complete it by April 2011.

The Inter-Oceanic Highway is a network of roads that connect three Peruvian ports on the Pacific to the town of Iñapari, in the Madre de Dios region, on the Brazilian border.

Stretches number 3 and number 4 connect a previously isolated zone in the south, Azángaro, in the Puno region, to Iñapari.

But the Inambari dam, a project of EGASUR (Southern Amazon Electrical Generation Company), will include an electrical plant and a reservoir covering 37,800 hectares in the heart of the Peruvian Amazon jungle, flooding 43.5 km of stretch number 2 of the road in Cuzco, 61.5 km of stretch 4 in Puno, and one km of stretch 3 in Madre de Dios.

Tierramérica confirmed that the highway is very near completion.

The residents and engineers doubt that the 100 km to be flooded can be replaced, because the proposed alternative route would pass through very rugged terrain and would also mean clearing away virgin forest.

EGASUR, operating with Brazilian capital, presented a project in January of this year to Peru’s Ministry of Transportation to modify stretches 2 and 4 of the highway, detailed in a letter from the firm to which Tierramérica had access.

According to the proposal, the alternative is a 98-km road with an investment of 377 million dollars from the company, according to a preliminary draft of the Inambari feasibility study.

“Who can guarantee us a new highway? It’s all hills and trees where they say they are going to build. And if they can’t?” wondered Olga Cutipa, president of the Río Inambari Organisations Front, and one of many residents who has fought for the construction of the route over the last 40 years.

EGASUR, meanwhile, presented a final version of the feasibility study for the hydroelectric plant to the Ministry of Energy and Mines in the first week of October. But the text is confidential. Community activists from Puno, who marched to Lima earlier this month to protest against the Inambari dam, demanded that the authorities make the report public.

The funding sources of the companies carrying out the overlapping highway and dam construction projects have something in common: they are all Brazilian.

EGASUR is made up of the private construction firm Grupo OAS and the government-owned Eletrobras Furnas — both Brazilian. Stretches 2 and 3 of the highway were entrusted to the Inter-Oceanic Concessionary Consortium, headed by Norberto Odebrecht Construction of Brazil, which is carrying out the main infrastructure projects in Peru.

Stretch 4 is the responsibility of Intersur Concesiones SA, of Andrade Gutiérrez, Camargo Corrêa and Queiroz Galvão. These companies, along with Odebrecht, comprise a sort of oligopoly of major construction projects in Latin America and Africa, habitually financed by Brazil’s National Bank of Economic and Social Development, (BNDES).

Inambari is one of five hydroelectric dams projected for construction in the Peruvian Amazon as part of an agreement signed by Peru and Brazil in June for the production of 6,000 megawatts of electricity.

Civil society groups argue that the agreement will especially benefit Brazil, because its terms state that Peru must deliver a set percentage of electricity to Brazil, and Peru cannot increase its share for domestic use in 30 years, regardless of increasing demand.

Engineer Rosario Linares, of Civil Society for the Construction of the Puno Trans-Oceanic Highway, told Tierramérica that the alternative road project is not feasible because it is located in an area subject to landslides.

She also pointed out that EGASUR’s January proposal did not include a study of environmental and social impacts. Tierramérica was unable to obtain comment from the Ministry of Transportation for this article, despite attempted contacts over two weeks.

The alternative route would need seven bridges in Cuzco, and six in Puno. One of them, over the Inambari River, worries Linares because it would have to be very large: 640 metres long and about 200 metres high.

A source from EGASUR wrote to Tierramérica in an email: “The important thing is that the new stretches will be Level 1 highways and will keep the hubs connected.”

Intersur, which is working on the stretch of highway in Puno, responded that EGASUR had not notified it of the reservoir flooding plans, and that work will continue to complete the paving of the road.

The situation exposes the lack of infrastructure planning for an ecosystem as fragile as the Amazon, said attorney Mariana Castro, of the non- governmental Peruvian Society for Environmental Law.

“These projects have social and environmental consequences that must be rigorously dealt with, because they are not being built in vacant territory,” said Castro.