Q&A: What the U.S. Undid for Women in Iraq

LONDON, Oct 20 2010 (IPS) - The U.S.-led invasion and then occupation of Iraq brought a sharp setback to the rights of women in that country, UNFPA head Thoraya Obaid tells IPS in an interview. 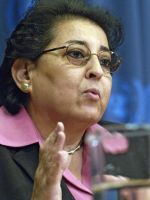 The view that Muslim societies are necessarily backward on the position of women arises from stereotyping, she says. And she speaks of herself as a Muslim woman who does not fit the stereotype.

Obaid spoke to IPS Wednesday at the launch of the annual UNFPA report, focused this year on the role of women in peace building. Excerpts from the interview:

Q: Is there any evidence that women are better than men at peace building and rebuilding? A: There is evidence that not only in peace building and rebuilding but in other areas as with migrant workers, the priorities for women are usually different. As a result women invest in the family, and during conditions where there is war or natural disaster, you will find that women can even cross borders to be able to keep the family together, and are able to negotiate the safety of their families. So in that context we see that women should be a part of any peace building negotiations.

Q: Women can play that role when they have an opportunity, but is there any sign that women are getting more such opportunities? A: Sadly, no. Opportunities are still limited because the recognition that women can play that role is still limited. We are saying that if we invest enough in women, in their education, in empowering them to have a voice, to raise their voice, and if we recognise their voices and find space for them to play a role in peace building, then they will do a good job.

Liberia is a very good example of that. It’s women who walk the streets saying we want peace. But society still does not recognise the real value of women, and that is a real problem.

Q: There is a widespread perception that the position of women in Islamic societies is low. But in Iraq women had many rights, that vanished after the Americans came along. A: I worked in Iraq for eight years until the invasion of Kuwait. We were there as a part of the Economic Commission for Western Asia, and we worked with women’s groups there at that time, and certainly, by the time we left the Federation of Iraqi Women had put together the best family laws you can get from all the different sects, and also labour laws. But then the invasion came and the whole thing went apart.

When the U.S. came in, they went back to the family laws of 1958. That tells you how far they have gone back. What they did was to cancel everything that was previous. And that is not really a good judgment for women. It was quite a bit of difference.

Q: How does this square with the perception that left to themselves, Muslim societies are backward, and that the U.S is the progressive one? A: That is a political question in many ways. There are stereotypes of Muslim countries, and Muslim women. I’m a Muslim woman, and I don’t fit that stereotype. There are many like me. I come from Saudi Arabia, and see where I am right now. This is the stereotyping of a people and also of a religion, and as a result assumptions are based on such perceptions. In many ways it is perceptions that hinder Muslim women in many places.

Q: Is the U.N. making a difference, or does it just produce reports? A: Look at the report we are putting out on Security Council resolution 1325. This has brought the issue of women as peace makers and peace builders into a higher level of political awareness. As a result, at least 19 countries are putting into place their own plans on how to bring women to end violence against women in wars, conflict and natural disasters, in camps and so on. These studies are important because they mobilise political leaders and I think that is a very important role for the United Nations.

Q: What does this report say that is significant and new? A: The new trend we are trying to bring into the discussion about women is the three R’s – Resilience, Renewal, and Redefining roles. Women are always seen as victims. We are saying women are not victims. Women have the resilience, they keep the families together. And with renewal, when we are rebuilding after a crisis, we should not rebuild society as it was before, with all the inequalities and inequities in it, but on a new human rights paradigm that will bring equality.

And with MDG5 on maternal health, for a long time actors in the humanitarian field did not recognise that women have special needs. In war and natural disasters, they do deliver babies, they do have biological functions that require special attention. There is a need to take care of their integrity and their dignity. So we are looking at MDG 5 because we want women to deliver babies in a clean state, and that they are safe.

More importantly [is] that they are protected from violence – when violence takes place, that they are provided with the services that support them but also that perpetrators of violence are brought to justice. Violence against women is part of the MDG5 target on universal access to reproductive health.