LUSAKA, Oct 19 2010 (IPS) - Civil society organisations warn that unless Zambia addresses its high poverty levels, the strides the country already made in achieving some of the Millennium Development Goals (MDGs) may be reversed. 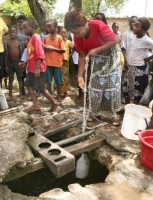 Strong GDP growth has not overcome poverty in Zambia, threatening achievement of development goals such as access to clean water. Credit: Kelvin Kachinwe/IPS

At first sight, Zambia’s economy looks promising: the International Monetary Fund (IMF) has projected the country’s Gross Domestic Product (GDP) to grow by 6.6 percent this year. Zambia also reported a bumper maize harvest in September as well as a rebound in tourism, copper exports and the construction industry.

But economic experts say that the country’s economic growth will not benefit the poor. Professor Venkatesh Seshamani, lecturer in the economics department of the University of Zambia in Lusaka, notes government is failing to use the growing economy to aid the social and economic development of the poor – the majority of its citizens.

“We need to have targets on human development and be able to state by what percentage we have reduced poverty in 2009, 2010 and so on. We should look at unemployment levels, people in low income brackets, etc,” Seshamani suggests, noting that measuring GDP is not enough to measure poverty.

Sylvester Bwalya, executive director of the Alliance for Development, which campaigns for sustainable human development, agrees with Seshamani. He says that although the country has scored many successes in many MDG areas, such as education, they may prove meaningless unless high poverty levels are addressed.

Without reducing poverty, Zambia won’t be able to get control over maternal mortality, HIV or lack of access to clean water and sanitation, he adds.

“Yes, we’re doing very well in other areas, such as access to primary education, where we have seen a rise in the number of enrolments. But the biggest challenge remains addressing the high poverty levels among our people,” Bwalya stresses.

Even though poverty have been on the decline, from 68.1 percent of the population unable to meet their basic needs in 1996 to 59.3 percent in 2009, according to Zambia’s Central Statistical Office (CSO), it remains a serious problem in the southern African nation.

“The economy has been doing very well, but our people are yet to start seeing the benefits of this economic growth. We need these benefits to be passed on to the average Zambian, for example through increased employment opportunities and lower taxes,” Bwalya suggests.

Frederick Tembo, a father of five who makes a living from selling vegetables that he buys from local farmers, says the living standard of his family has not been improving over the past few years, no matter how well the country’s economy is doing.

“Our electricity tariffs have just been increased, together with public transport costs. And even with the maize bumper harvest [this season], the prices of mealie-meal have not reduced much. We hardly make enough money to give ourselves a decent living,” he laments.

Civil Society for Poverty Reduction (CSPR), a Lusaka-based anti-poverty advocacy network of over 140 organisations working for pro-poor development in different parts of the country, believes poverty can only be reduced in Zambia if the agricultural sector receives a boost.

The network suggests government should attract private sector led investments to ensure farms are run like – big or small – businesses, instead of mainly trying to stimulate the sector through artificial methods, such as subsidies.

In Zambia, where most rural people live off small-scale farming, government’s Fertiliser Support Programme – which was launched in 2002 and enables 200,000 farmers to purchase fertiliser at 75 percent of its market price – is not far-reaching enough, complains CSPR. Although there are no official figures for the number of small-scale farmers, they are estimated at about one million, plus their families, out of a population of about 12.5 million.

“Government should devise systems that attract more investment in various sectors. Without private sector investment in the agricultural industry, it’s difficult for government alone to provide all the needed solutions aimed at addressing the problem of poverty,” explains CSPR executive director Patrick Mucheleka.

Lusaka-based independent economic consultant David Punabantu also believes that subsidies are not the answer to generating long-term economic empowerment of smallholder farmers and the poor. Instead, he says, agricultural policies and private sector investments need to enable smallholders – and not only commercial farmers – to directly access markets and sell their produce at a competitive price.

“If farmers were paid the correct price for their maize, then every house built in urban Zambia could have been built in rural Zambia, every new car being bought in urban Zambia could have been a tractor or a truck or factory equipment to process agricultural goods,” says Punabantu, showcasing how alleviating poverty will reduce the urban-rural divide.

He says it would have made a lot more economic sense for government to make sure farmers can earn a good livelihood, instead of making them dependent on subsidies throughout the past four decades.

“They could have bought their own tractors, fertiliser and invested in processing agricultural goods, which in turn could have created jobs in food processing,” Punabantu explains.

With more income, the rural poor would also be able to send their children to school and have better access to health care, electricity, clean water and sanitation.