INDIA: Dalits Turn to the Goddess of English

NEW DELHI, Nov 6 2010 (IPS) - India’s Dalits are turning to the ”Goddess of English” for deliverance from centuries of religiously-sanctioned caste oppression. 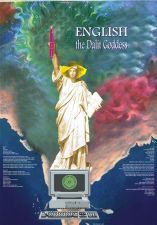 The Goddess of English appears as a new deity. Credit: Chandra Bhan Prasad/IPS

Dalits, meaning literally the broken people, have begun erecting a temple to their new muse in the Lakhimpur Kheri district of northern Uttar Pradesh, a sprawling state of 190 million people, regarded as the heartland of orthodox Hinduism.

The inspiration for the idol of the goddess is unmistakable for the close resemblance it bears to the Statue of Liberty in New York. But, instead of the flaming torch, the goddess holds aloft a pen with her right hand and cradles a book in the crook of her left arm.

Also, where Hindu deities are usually portrayed standing on a lotus flower pedestal, the Goddess of English stands on a computer console, signifying the technological age that the Dalits hope to enter. It also represents a break with the traditional past that has been so cruel to Dalits, once regarded as untouchables and forced to do menial work.

The high priest of the temple, Chandra Bhan Prasad, a leading Dalit intellectual, told IPS that the Brahmins (members of the highest caste in the Hindu social hierarchy, entrusted with learning and priestly duties) of Uttar Pradesh made the mistake of repudiating the English language.

”Nationalist politics based around the Hindi language appear to have turned even the Brahmins of Uttar Pradesh into a backward caste and the Dalits are determined to avoid that mistake,” said Prasad. ”As India globalises the only way anyone, not just Dalits, can avoid being left behind is by learning English.”

Indian provinces which made the study of the English language optional in schools have fallen behind states that maintained the language as compulsory through the secondary education level.

”This is why Bangalore (capital of southern Karnataka state) has become an international hub for information technology and not Lucknow (capital of Uttar Pradesh),” Prasad argued.

Prasad readily admits to borrowing his ideas from Thomas Babington Macaulay, a British colonial who introduced English as a medium of instruction in India in 1854 with the objective of raising ”a class of persons Indian in blood and colour, but English in tastes, in opinions, in morals and in intellect.”

Macaulay’s policies made him a natural target for Hindu nationalists. “No Hindu who has received an English education ever remains sincerely attached to his religion,” he argued. “It is my firm belief that if our plans of education are followed up, there will not be a single idolater among the respected classes 30 years hence.”

Prasad said Macaulay’s policy set in motion the liberation of the Dalits by dismantling the traditional system of learning based on Sanskrit, the use of which was denied to the lower castes.

”When the British opened English-medium schools, Dalits were prevented from entering them by upper caste people, forcing the colonial government to issue orders that no one could be denied admissions on the basis of caste, creed, gender or religion,” Prasad said.

”Lord Macaulay was a social revolutionary who, by drawing up the Indian Penal Code, made all Indians equal before the law,” said Prasad, who dutifully celebrates the colonial’s birthday each year Oct. 25.

In contrast to Prasad’s views, Hindu nationalists pejoratively call Indians who are less than proud of their own traditions and heritage ”Macaulay’s Children”.

Among the tallest of Macaulay’s Children was Bhimrao Ramji Ambedkar (born 1891) who overcame the handicaps of being born a Dalit to acquire degrees from Columbia University and the London School of Economics.

Ambedkar, who left a progressive stamp on the Indian republic as the architect of its 1949 constitution, was among the first to exhort his caste fellows to learn and use the English language as a means of emancipation. ”English is the milk of the lioness,” he told them.

Ambedkar’s constitution guarantees the freedom of religion, outlaws all forms of discrimination and includes a system of positive discrimination reserving jobs in the government and seats in educational institutions for Dalits.

Prasad said that despite such constitutional provisions Dalits, who form 16 percent of India’s 1.2 billion people, have continued to suffer discrimination or worse. ”In many parts of India we are not allowed to enter Hindu temples, so we now plan to set up our own temples dedicated to the Goddess of English…others are welcome to join us.”

”With the Goddess of English, Prasad has hit upon an idea that rests upon the flexibility and accommodation of the Indian tradition,” said Yogendra Singh, one of India’s leading experts on the sociology of culture, and emeritus professor at the Jawaharlal Nehru University.

”Prasad displays a great sense of history and a remarkable understanding of the Indian ethos that has an infinite capacity to locate the present in the past,” said Singh, author of the seminal work, ‘Modernisation of Indian Tradition’.

Much the same could be said for the Dalit chief minister of Uttar Pradesh, Mayawati (one name), who has ignored criticism to squander public funds to set up statues of herself around the state. The statues invariably depict her carrying a handbag – a symbol of female modernity and power for most Indians.

Singh told IPS that even if Prasad’s plan to set up temples to the Goddess of English across the country fizzles out the message that there is value in learning the English language would have gone home.