LIBERIA-COTE D’IVOIRE: Border Villages Sharing the Little They Have

BUTUO, Liberia, Mar 28 2011 (IPS) - This Butuo man only knows one phrase in French: Viens manger. Come eat. That’s what they said to him years ago, when he was one of hundreds of thousands who fled to Côte d’Ivoire to escape the brutal 14-year civil war in Liberia. 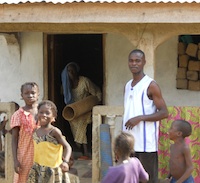 The people in Butuo and other border villages have thrown open their homes to Ivorian refugees. Credit: Jessica McDiarmid/IPS

The tables have turned now. This town a couple of kilometres from the border has been sheltering thousands of Ivorians since the disputed November 2010 election that is pushing the world’s top cocoa producer ever closer to civil war.

Incumbent president Laurent Gbagbo has defied international pressure to step down after a U.N.-certified defeat to long-time rival Alassane Ouattara. The ensuing conflict has killed hundreds, displaced nearly a million, thrown the country’s economy into turmoil.

The crisis is having a growing impact on neighbouring countries, many of which are recovering from their own wars.

Villagers in Butuo have taken dozens into their small homes, in some cases literally giving refugees the food off their plates and the clothes off their backs. As one NGO worker put it, they remember what it is to be a refugee, to run through the bush fleeing machine gun fire. They remember who cared for them in their times of trouble.

Titos Peters, a lifelong resident of Butuo, lives in his family’s house with about a dozen other relatives. Since refugees started flocking to Butuo, many from the village of Bin Houye just across the border, Peters’ family has had about 60 people under its roof. Some are relatives, many are strangers in need of help, says Peters.

“We are all related, you know,” says Peters, who spent years during Liberia’s war in Bin Houye. “Anything happens here on this side, we run to that side. Anything happens that side, they run to us.”

But the weeks have dragged into months, exhausting already meagre food and water supplies, overwhelming health and sanitation facilities. As disease starts to spread and more and more people go hungry, tensions are beginning to surface.

Annie W. Kwaleh, district woman’s representative, is running out of patience. She says refugees are filling people’s homes and eating their food whether they’re invited or not, and disease is spreading as people defecate in public spaces for lack of adequate facilities.

“The small what you have you share with strangers,” says Kwaleh. “They don’t want to go [to the camps] and we can’t put them outside. They’ve eaten all our food stores, we’ve got nothing left. We don’t know what do to.”

The United Nations High Commission for Refugees is slowly moving refugees from the scattered villages along the remote border to a main camp at Bahn, 60 kilometres of bumpy road away. The camp has a capacity for about 15,000 – though only around 2,500 are there now. Another camp is under construction and transit camps have sprung up throughout Nimba County, the epicentre of the refugee crisis to date.

Previously, agencies were assisting refugees in the border region. But on Feb. 24, heavy clashes broke out along the western edge of Côte d’Ivoire between pro-Gbagbo forces and the former rebel army aligned with Ouattara.

“That day started with a phone call that there were 2,000 people at the border,” says Dina Sinigallia, an external relations officer at the United Nations High Commission for Refugees sub-office at Saclepea, near the Bahn.

The UNHCR is now dealing with ballooning numbers and deteriorating security on the border, and the focus is now moving people out of the border region. Sinigallia explains the policy is to recommend refugees move to Bahn or one of 15 communities that have settlement areas.

“Assistance will no longer be provided in the border region. Another food distribution is unlikely,” she says.

But many refugees are refusing to be transferred to Bahn – they don’t want to move further away from family members still in Côte d’Ivoire and they say they can’t eat the bulgur wheat handed out by the UNHCR without getting sick.

P. Zoyeagbander D. Gbeardeu, assistant to Butuo’s superintendent, says the little food that was distributed was unsuitable – the same bulgur wheat that’s keeping refugees from going to camps – and sanitation is deteriorating. At least seven people have died of diarrhoea since the influx sparked by late February’s fighting, he says.

He also worries about security – the district, with a population of 47,000 people, has three police officers, 13 border and eight immigration officials, and fighting has been close enough that villagers can hear the machine guns and heavy artillery.

“We are not praying for any bad thing to happen, but in case it did, we are left very vulnerable.”