CAPE TOWN, Jun 23 2011 (IPS) - One winter morning in central Cape Town, despite the gale force wind and the threat of rain, Jacques Sibomana, who was going to be ‘up and down the city all day’, decided he’d rather cycle than brace against the wind on foot. 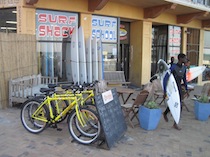 Cape Town is one of the growing number of cities worldwide that is considering ‘bike-share'. Credit: Leonard Gardner/IPS

“I went to hire a bicycle but I couldn’t because I didn’t have a credit card,” he says. “The only option was for me to put up a deposit of 2,000 rands (about 290 dollars), which didn’t make sense, but the vendor wanted insurance.”

Cape Town is one of the growing number of cities worldwide that is considering ‘bike-share’, a local authority-owned bicycle transport system aimed at short-term trips around the city. There are already more than 130 city bike-share systems worldwide, from the most famous, Velib in Paris, to the most recent, Barclays (Boris’ Bikes) in London, and the largest, Hangzhou, in China.

Bicycle sharing systems, also known as public bike schemes, are designed for quick urban trips and to complement public transport, enabling people to complete the last few kilometres of a journey by bike rather than on foot.

Unlike with leisure bicycle rentals, users toting smart cards can pick up a bicycle at one location (every 300 metres or so) and drop it off at another. The systems offer fast and easy access, with no large deposits, documentation or attendants. Pricing systems are geared toward short commuter trips. Often such systems are government subsided, or funded through advertising revenue. They’re slick, stylish, and fully automated – with touch-screen maps, GPS-based route planners and sophisticated tracking devices.

Yet the concept has proven to be a tough sell in developing countries. In Cape Town a number of pilot projects have stalled at business plan phase.

Carlos Felipe Pardo, a psychologist from Bogota, Colombia, who studies transport behaviour, is not surprised that investors hesitate before taking the plunge in the global south. The risk of theft and vandalism is relatively high, even in high-tech systems such as Velib.

In countries where theft is significantly more common, and where there are few secure bicycle lock-up facilities, this risk is even greater. Add to this minimal bicycle infrastructure, the complicating factor of mandatory helmets (in South Africa) and a lack of data about potential user numbers, and it’s not uncritically a recipe for success, he says.

Although the advent of bike-share might change the purpose and profile of bicycle users, “there is the risk of alienating poorer people who cannot afford the deposit or do not have a credit card,” Pardo says. “And it would be inequitable and unethical for a public service to exclude part of the population on this basis.”

For this reason, systems proposed in African and Indian cities, for example, are low-tech, and designed to create jobs, with guards, lock-and-key and no-pre-registration.

But the excessive paperwork and the slow interface between customer and attendant disadvantage these cheaper options. This means that bike share isn’t the ‘personal rapid transit’ that makes it attractive elsewhere, says Eric Britton, World City Bike Forum.

But here’s the thing: had Sibomana been in Rwanda, the country of his birth, or Malawi, Kenya, Tanzania, Uganda, Zimbabwe or Zambia, for that matter, he could either have left behind his shoes as ‘insurance’, or simply taken a bicycle taxi and sailed forth into the gale.

For public bike systems are already common practice in much of rural and urban Africa, albeit on a smaller, and less-sophisticated scale.

In Malawian towns, suits and ‘Sunday best’ are common cycling attire, although the bicycles are refurbished second-hand imports from India or China. And the ‘bike-share’ operators, entrepreneurs at dusty road-ride stalls, have dealt with the issue of theft not with smart cards and auto-locking but by never letting the bicycle out of their sight.

Says Austin Luhanga, a ‘boda boda’ (bicycle taxi) rider outside Thyolo in Malawi: “If you want to go to town it’s quicker by boda boda. You sit on the back (the rear racks of the bikes are slightly modified and the spokes reinforced), I drive you there, I wait, and drive you back.” Fees are per kilometre, not per hour, and are largely affordable to all. “Its cheaper than a minibus, faster than walking.”

And the side-saddle position is suitable for women in skirts and men in robes. Just like formal public bike systems, bicycle taxis are mostly used for short trips to or for work, or as feeders to other forms of public transport. They’re able to overtake slow-moving vehicles, nip in- between unmoving traffic, or access areas too densely populated for larger vehicles.

In Malawi, informal bicycle co-ownership is also popular: about 40 percent of bicycles being used are borrowed, says Jonny Perrott, Country Director, Africycle, Malawi. “Essentially, there’s a rule for bicycles here: if there is a working bicycle, it will be used, and used, and used…”

A vibrant bicycle commuter culture leads to the success of bike share, not necessarily the other way around, says Britton. Which is something that South Africa, one of Africa’s wealthiest countries, does not share with its neighbours to the north.

In South Africa the bicycle taxi has probably not taken off for the same reasons commuter cycling has not taken off: busy roads and dangerous drivers, says Nic Grobler, who with colleague Stan Engelbrecht has traversed South Africa photographing commuters for their Bicycle Portraits project. They did not encounter a single bicycle taxi en route.

When it comes to bike-share, South Africa is caught between two worlds: a motorised model in which bicycles have low status, and the hope that iconic public bikes could bring about significant change; and an informal economy where the urban poor are the people most in need of mobility.

“Western bike sharing begins with a business and marketing plan, and implementation is followed by a nervous waiting and watching period, hoping it will be adopted by the people,” says Perrott. “These sophisticated systems are unlikely to take off in the poorer parts of the world, but bike-share is already the cornerstone of the mobility system and informal economy in much of Africa. It’s been evolving ever since bicycles showed up, to fit the daily transport needs of the people.”