NEW YORK, Jun 20 2011 (IPS) - Fredy Peccerelli and his team of forensic anthropologists sort through human bones and other remains – shoes, clothes, ID cards. A stack of long, thick bones dark with dirt accumulates as they painstakingly reconstruct what they can from Guatemala’s La Verbana Cemetery, where for decades anonymous corpses have been dumped. 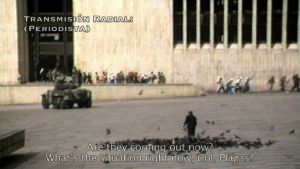 The year is 2010, the film, “Granito: How to Nail a Dictator”. The Guatemalan Forensic Anthropologists Foundation is gathering evidence to help bring leaders of the Guatemalan government and military to trial for crimes against humanity. They are also trying to bring some sense of closure to the families of the murdered and disappeared during the Guatemalan civil war from 1960 to 1996.

“Granito”, directed by Pamela Yates, Paco de Onis, and Peter Kinoy, chronicles the painstaking efforts by survivors, victims’ families, lawyers, and other professionals, including Yates herself, to bring General José Efraín Ríos Montt, head of the military government from March 1982 to August 1983, to trial at the Spanish National Court for crimes against humanity.

In 1996, as a stipulation of peace accords ending the civil war, the Guatemalan Truth Commission investigated the mass killings and disappearances, which peaked in 1982, and discovered the army’s pattern of targeting the indigenous Mayan population. The Center for Justice and Accountability estimates that over 200,000 were killed.

Yates was in Guatemala in 1982, filming “When the Mountains Tremble”, a documentary about guerrillas’ resistance efforts against a string of U.S.-backed military dictators. Some of the film’s footage was used to help build a case of genocide against Ríos Montt.

The Human Rights Watch Film Festival, which opened late last week in New York, is screening both of these films and 17 others that relate to human rights.

Yates’s film, along with “La Toma” (The Siege), directed by Angus Gibson and Miguel Salazar, and “Impunity”, directed by Juan Jose Lozano and Hollman Morris, poignantly depict the unrestrained brutality of military regimes, the sufferings of survivors and families of victims, the drawn-out process of demanding justice, and above all, what seems to be the elusiveness of victory.

“La Toma” is the story of the army’s siege on the Palace of Justice in Bogota, Colombia in 1985, in which 94 people died. During the chain of events initiated by M19 guerrillas’ takeover of the Palace and resulting in the army’s overnight siege, 12 people disappeared. Only two returned.

Over a quarter century later, their families still demand that army leaders be held responsible. In June 2010, Colonel Alfonso Plazas Vega, commander of the army during the siege, was sentenced to 30 years in prison for aggravated forced disappearances, but he has yet to actually go to prison.

“Impunity” exposes deep-rooted corruption within the Colombian government, which was complicit in or even paid paramilitary groups that carried out atrocities including mass killings and disappearances.

In 2008, the Colombian government extradited 15 former paramilitary leaders to the U.S., where they would face charges of drug trafficking and money laundering – not the charges of conspiracy, racketeering, kidnapping and homicide that families and lawyers had demanded.

By July 2010, only two partial sentences had been passed for the assassinations of 11 people.

With so many crimes committed and so little justice brought upon the perpetrators, these films beg the question: where is justice?

Their answers are not straightforward, and yet somehow they are hopeful.

Angus Gibson, co-director of “La Toma”, calls Vega’s trial a “landmark.” Even if at times holding leaders accountable seems to take one step forward and two steps backward, he tells IPS, “that one step forward is very important.”

Pamela Yates has a similar outlook, maintaining that there are “many ways to look at justice done”.

“I don’t think justice is just done with a trial and a conviction,” she elaborated in an interview with IPS.

She cites the example of Chilean dictator Augusto Pinochet. Detained in London to be extradited to Spain, he ultimately never went to trial but “his legacy was destroyed”, Yates says.

Even so, these films prove that obtaining justice – or even raising that issue – is a painstaking process that can span decades. The sluggish pace is due partially to rule of law and evidence, and partially just a matter of political will, says Andrea Holley, deputy director of the HRW Film Festival.

As shown in “La Toma”, the trial against Colonel Vega began in 2008, when the siege and disappearances occurred in 1985. Events in “Granito” have a similar time span.

As a human rights defender and a filmmaker, Yates says she is “used to setbacks”. But every once in a while, “we have really great victories.”

The power of collective change

“La Toma”, Gibson says, is a “celebration of the relentless determination of the families of those disappeared, who… for 25 years didn’t give up.”

The aftermath of the trial – Vega convicted but not yet jailed – is not uplifting, but Gibson insists that “La Toma” is about progress achieved over the course of a quarter century in defending human rights.

Over the years, the human rights defenders have brought about a change in the paradigm of international and domestic justice. They demonstrate what Yates calls the “Granito concept” – the power of collective action.

“Granito” means a grain of sand. “Each of us has to figure out: what is the tiny grain of sand that we’re going to contribute?” Yates explains. Believing that no one person is more heroic than another, she says, is a mindset that can “make it a lot easier for us to act”.

Holley also speaks of the power of collective action. It is a concept, she says, that is not prevalent in the U.S. But elsewhere in the world, it is a way of life, and it manifests itself in the fight for justice.

Human rights is about “lots of people getting together, because we all have different skills,” she tells IPS.

Yates believes that because human rights defenders and activists have worked together and so diligently, particularly in Latin America, they have been able to strengthen the judicial system and rule of law in their countries.

Raw snapshots of suffering as much as of determination, these films are also a testament to the dignity and victories of all those who defended their rights and demanded justice.