UXBRIDGE, Canada, Jul 28 2011 (IPS) - Many migrants from southern Brazil who clear forests in Brazil’s state of Amazonas are making their living as small-scale land speculators and not as farmers or as cattle ranchers, new research has found. 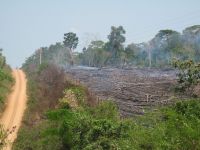 Slash-and-burn clearing in the rainforest in the state of Acre, next to Amazonas. Credit: Mario Osava/IPS

This on-the-ground reality and the proposed changes to Brazil’s Forest Code are likely to ramp up deforestation rates again, despite the country’s commitment to reduce deforestation 80 percent by 2020, experts say.

The Forest Code (Law 4771) was adopted in 1965 and has undergone numerous reforms, the most recent in 2001. This past May 24, an overwhelming majority in the Chamber of Deputies voted in favor of a bill to relax its requirements with regard to forest conservation. The bill is currently under study in the Senate.

A detailed study conducted in the municipality of Apuí along the Transamazon Highway in Amazonas found that many families in the region earned little income from cattle.

Instead, they were clearing the land in order to claim land titles to sell the land to large corporate ranchers, according to the study “Forest Clearing Dynamics and the Expansion of Landholdings in Apuí, a Deforestation Hotspot on Brazil’s Transamazon Highway”, published in the journal Ecology and Society in June.

From the early 1990s the population of Apuí has tripled, and the municipality has had some of the highest rates of deforestation in all of the state of Amazonas. Approximately 90 per cent of the area has been converted into pasture, the study found.

“These families are always moving into new forest areas to deforest so they can claim land title. And after a few years they sell it for a much higher price,” said study co-author Gabriel Carrero of the Institute for Conservation and Sustainable Development of Amazonas (IDESAM).

Under Brazilian law, land title can be given to those who “improve” unclaimed lands. Those families clearing forests in Apuí are “just trying to make a better life for themselves,” Carrero told Tierramérica from Manaus in Amazonas.

They do have cattle, but it is more of a hobby that can raise some cash, he said, based on detailed interviews with 83 households who owned more than 300 properties in the region.

“The real incentive is to sell their property to large farmers who have sold their lands in southern Brazil or Paraguay and are looking to buy large consolidated tracts of land,” said Carrero.

Then the families move away from the frontier, go up the road into untouched forest and do it again, he explained. “This is just their way of life.”

“Our study proves that roads are the most important driver of deforestation,” he added.

Globally, deforestation puts an astonishing 2.9 billion tons of carbon into the atmosphere every year, according to the first detailed calculation published 15 July in the journal Science.

For comparison, total yearly emissions from all fossil fuels (coal, gas, oil) plus production of cement are just under 8 billion tons.

There is a “huge influx of carbon from deforestation and it is much larger than previously thought,” said Pep Canadell, executive director of the Global Carbon Project in Canberra, Australia and co-author of the study published in Science.

The potential benefits of the Reduced Emissions from Deforestation and Degradation (REDD) carbon credit scheme – which would pay communities and countries to conserve forests – could be even more important than anyone thought, Canadell told Tierramérica in an interview.

“I’m much more familiar with Indonesian forests, and REDD has had no effect on deforestation so far,” he said. However, large donations from Norway, Australia and the United States totaling close to 1.5 billion dollars are having an impact on the ground in that country.

The U.N.-backed REDD is likely years away from putting cash in the hands of families in Amazonas or Indonesia or anywhere else, Canadell said.

“Families struggling to make a living aren’t going to wait years to see if the international community gets its act together on REDD,” he commented.

No one in Apuí is making money from carbon credit programmes like REDD, said Carrero. “Land speculation is more profitable,” he added.

Deforestation and land sales will be even more profitable with proposed changes to Brazil’s Forest Code, Carrero warned.

Those changes will allow landholders with less than 400 hectares to deforest all of their land in the “legal” Amazon region, as well as granting an amnesty for the many who have violated the conservation requirements now in force.

The Code currently allows the clearing of only 20 percent of the forest on landholdings in the “legal” Amazon, a geographic division that includes all states partially or totally covered by the Amazon rainforest biome.

“I’m 100 percent certain that this will increase deforestation and result in a big increase in greenhouse gas emissions from the Amazon,” Carrero said.

Brazil’s agribusiness is behind the proposed changes and is pressuring politicians for more flexible laws.

Ironically, it is Brazil’s success in reducing deforestation rates by 70 per cent from 2004 to 2009 that is behind the big push to change the laws.

“The recent crackdown on municipalities with high deforestation rates was so successful, farming and ranching interests want to get the laws changed,” Rhett Butler, writer and conservationist at the NGO Mongabay.com, told Tierramérica.

The Association for Tropical Biology and Conservation (ATBC), the world’s largest scientific organization devoted to the study, protection and sustainable use of tropical ecosystems, has warned that the proposed changes to the Brazilian Forest Code will result in higher levels of deforestation.

In early July the Association issued an official resolution urging the government to do a science-based assessment of the potential ecological impacts before proceeding.

Brazil officially pledged to cut deforestation by 80 percent from historic levels by 2020 under the 2009 Copenhagen Accord.