CAMELIAS, Colombia, Jul 15 2011 (IPS) - “God willing, we will make it” reads the sign on a rusty old all-terrain vehicle, ideal for the complicated drive to the remote Curbaradó river valley in the banana-producing region of Urabá in northwest Colombia. 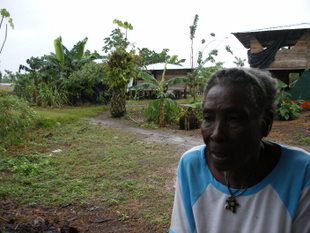 This area is part of the jungle province of Chocó, one of the world’s most biodiverse places until it was drawn into the armed conflict between left-wing guerrillas and government forces – and, since the 1980s, far-right paramilitary militias – that has plagued Colombia for nearly half a century.

IPS travelled to this isolated region with documentary-makers from Justice for Colombia, a coalition founded in 2002 by the British trade union movement in response to murders of labour activists and the overall humanitarian crisis in Colombia.

The killings in Urabá began in 1995, and the major paramilitary offensive started in 1996. “This has all changed so much that it looks completely different now. Everything has been destroyed: the trees, the jungle, the rivers, the streams,” says María Chaverra, 69.

The slight, dark-skinned mother of eight and grandmother of 37 has lived here for over half a century, as a member of one of the afro-descendant communities who have practiced subsistence agriculture in the sparsely populated Chocó, Colombia’s poorest province, for generations.

Although by law the rural black communities collectively own their territories, many have been driven off their land, which is rich in natural resources and biodiversity, since the 1990s.

Throughout the Curbaradó river basin and the Jiguamiandó river valley to the south, Chaverra is known as the “Matriarch” in recognition of her leadership role.

African oil palm companies financed with capital of dubious origin came into the area and diverted rivers and dried up streams. After weeks of drought – inconceivable in the past in Chocó, one of the world’s rainiest regions – the water is finally pouring down now.

This is the Camelias humanitarian zone, a five-minute walk from the Curbaradó river. The zone, which is under the protection of Inter-American Court of Human Rights provisional measures, is home to some 30 internally displaced families who have braved the dangers to return to their land.

In the humanitarian zones, no armed actors are allowed within the premises, to protect the civilians from the surrounding armed conflict.

Some have dared to leave Camelias, to move back to their nearby farmland, which is not encompassed by the humanitarian zones. Meanwhile, new families arrive, seeking refuge from threats.

Camelias, a 3.5-hectare area, belongs to Chaverra. “My husband and I donated it to create the humanitarian zone, and to bring people together here, to struggle, defend and denounce. When everyone goes back to their nearby farms, there will be no more humanitarian zone,” she says.

“By denouncing what has happened here, at the national and international levels, with the support of the Colombian Inter-Church Justice and Peace Commission, we were able to get help to create this humanitarian zone. So we started moving closer to our territory, but most of the people haven’t made it back to their land yet,” she explains.

“We live in the middle of a conflict, but we have nothing to do with any of the armed groups – neither the paramilitaries, nor the army, nor the guerrillas, none of them,” she says.

The area is marked off by barbed wire on all sides. On the nearby river bank is a military base. Across the river is Puerto Brisas, a village reportedly under the control of paramilitaries who are supposedly demobilised.

The paramilitaries moved into the area with the excuse that they were driving out the left-wing guerrillas, who took up arms in 1964. But their real aim turned out to be the land.

To force the local population out, the paramilitaries accused them of belonging to the rebel groups, burned down their houses and villages, and killed many. By 1997 the entire population in the two river basins had fled their homes, and most had left the area.

Between 3.6 and five million Colombians have been displaced since the mid-1980s. The number depends on the source of the estimate – the government or human rights organisations.

“We were displaced by the Colombian State itself, because the incursions were carried out by the paramilitaries in complicity with the army, Brigade 17,” which was based in a nearby municipality, says Chaverra, repeating what she had denounced to the Inter-American Court.

“It wasn’t guerrillas they drove out. I was a witness. I never saw a war like the one that took place here,” she says. “It was the peasants who suffered. The ones who didn’t die suffered calamities and were exposed to the elements. Many saw their children die,” and the adults died without any medical treatment or even a simple painkiller, she recalls.

“Many pregnant women gave birth along the trails. They would go into labour as they ran, and when they couldn’t run anymore, they would stop and the baby would drop out right there. That’s what our life was like in this war,” she says.

But Chaverra and her family stayed in the area, dodging death. “We were a group of seven families, and we would escape together. When we heard bullets, we would flee to another place. Once we lived in the mountains for six months: rain or shine, we had no protection, even if it was pouring like today,” she adds.

They sought shelter in the cave-like enclosures formed by the enormous roots of certain trees in the jungle. They often had to steal rice to eat.

When they returned, “there wasn’t a single piece of land that didn’t have African oil palms planted on it. And the chemicals (pesticides) had deteriorated the land,” she says.

The families in Camelias depend on farming. “We tried again. Despite the fear, we planted the plantains that you see over there,” and rice and corn, and started to raise a few chickens “to be able to eat,” Chaverra says.

With the harvest from one hectare of corn they buy sugar, salt, soap and cooking oil. But when they need something from Puerto Brisas, Chaverra sends someone else. “Many of us don’t cross to the other side. Me, I don’t even go to the edge of the river,” she says.

“We are all under threat, especially me because I was the legal representative of the two river basins for six years,” she adds.

The military base “watches out for the interests of the companies, we know that because we have seen it,” she says. And the paramilitaries? Chaverra holds her two index fingers next to each other, and says “they’re together.”

During a community assembly they all debate, gesture and draft statements. Chaverra, who speaks at the end, doesn’t beat around the bush: “What the ministers should have told us is that they are immediately going to evict the invaders from our land,” she says.

The ministers of agriculture, Juan Camilo Restrepo, and the interior, Germán Vargas, visited Camelias in March, to formally recognise the local community’s collective ownership of the two river basins.

The government did so in compliance with several Constitutional Court verdicts in favour of the traditional inhabitants of the area, issued after the community began its legal battle in 2000 with the help of the Inter-Church Commission, which also receives constant death threats.

The court rulings also ordered outsiders who occupied the land of displaced persons to move out. But the ministers didn’t mention that aspect, and the police have done little to nothing.

Conservative President Juan Manuel Santos promised that during his 2010-2014 term in office, his government will distribute two million hectares of land to peasant farmers, by returning land seized from them and issuing formal land titles, which many small farmers lack even when the property has been in their family for generations.

The goal for 2011 is 500,000 hectares, but the official figures indicate that of the 217,000 hectares distributed so far, only 14,000 involved the restoration of land to the original owners.

The people who have occupied the land around Camelias are not to be trusted. In June, one sexually assaulted a four-year-old girl and fled, after another did the same with a 10-year-old girl just a few weeks earlier.

In May, the Ministry of Agriculture reported to the public prosecutor’s office the attempted rape of two women in the area. An unarmed group of activists from the UK-based Peace Brigades International (PBI) had driven the attackers off.

In December, waves of squatters, poor but intimidating, began to flood into the Curbaradó basin. They warned that if they were bothered, “there are three possibilities: club, machete or lead,” Chaverra says.

“The business owners who drove us out are behind the invasion,” she adds.

“They want us to clash with them, to be able to say ‘it’s a fight among peasants’. We have avoided that,” she says. “We want them to be evicted legally from our territory, by peaceful means, by the authorities.”

A census is now being carried out, under the orders of the Constitutional Court, and elderly inhabitants like Chaverra can play a key role in identifying members of the traditional community, and determining which people are invaders who should be evicted.

More than 1,000 hectares in the area have been occupied and time is pressing. “The farms of five of our families have been invaded. We don’t have anywhere to plant even a clump of rice,” says Adriana Tuberquia.

“We had plantain crops and the invaders cut the plants down to plant corn. We’re desperately waiting for them to be evicted,” she says.