PESHAWAR, Jul 23 2011 (IPS) - A series of Taliban attacks selectively targeting Pakistani security forces is being seen as an attempt to shore up the flagging popularity of the fundamentalist Islamic scholars. 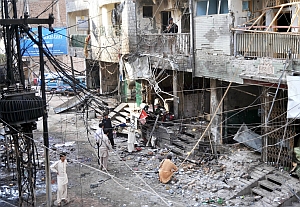 Scene outside a Peshawar supermarket after the Jun. 12 bombing which killed 45 people. The Taliban denied responsibility. Credit: Ashfaq Yusufzai/IPS

“As long as the Taliban targeted security forces alone, the local people supported them as they believed it to be part of the jihad against the United States,” said Maulana Abdul Wahid, a prayer leader in this city, capital of Khyber Pakhtunkhwa, one of Pakistan’s four provinces.

“However, towards the end of 2005, as the Taliban launched a terror campaign against the general public, targeting mosques, marketplaces, schools and government buildings, public sympathy turned to anger,” Wahid said.

Wahid had once helped raise funds for the Taliban to shelter them as they fled neighbouring Afghanistan in the wake of the U.S.-led invasion of that country in late 2001.

Among the Taliban leaders who crossed over the border to find sanctuary in the Pashtun-dominated areas of Pakistan is Afghanistan’s former head of state Mullah Mohammed Omar, wanted by the U.S. government for harbouring Osama bin Laden.

“We stopped supporting the Taliban after they began killing and injuring innocent and non-combatant people,” Wahid said. “The people here repent the goodwill they had shown towards Taliban.”

That goodwill stemmed from the fact that Khyber Pakhtunkhwa province, the Federally Administered Tribal Areas (FATA) and parts of Balochistan province are dominated by Pashtuns who form the backbone of the Taliban movement in Afghanistan.

Pashtuns account for about 16 percent of Pakistan’s 174 million population and make up 42 percent of Afghanistan’s 30 million people.

Khalid Khan, a retired army major, who took part in Pakistani military operations against the Taliban in FATA, told IPS that the Taliban has now gone back to targeting security forces exclusively in the hope of winning back the hearts and minds of the local people rather than intimidate them.

The new strategy, said Khan, was apparent in the pattern of attacks mounted in revenge for the killing of bin Laden by U.S. forces in the Pakistani garrison city of Abbottabad on May 2.

“The Taliban struck at the Frontier Constabulary in Shabqadar Charsadda district on May 13 in a twin suicide attack that killed 80 soldiers,” said Khan, pointing to one example of the Taliban’s new tack.

“On May 18, Taliban militants attacked a security post on the outskirts of Peshawar, triggering a four-hour gun battle in which 17 people, 15 of them civilians, were killed, but the Taliban denied involvement because of the deaths of so many ordinary people,” said Maulana Zaheerul Haq, who runs a religious school.

In contrast, the Taliban took care to claim responsibility for the May 22 storming of the naval base in Karachi, leaving 10 military personnel dead and destroying two U.S.-supplied surveillance aircraft.

On May 28, Taliban militants drove a car packed with explosives into a police station in the northwestern city of Peshawar, killing at least 11 people and wounding 39. With most of the victims being policemen, the Taliban were quick to take credit.

True to pattern, the Taliban denied having a hand in the twin midnight bomb blasts at the crowded Khyber Super Market in Peshawar on Jun. 12, which killed 45 people and injured as many.

“They are desperate to wash their tainted image among the public,” said Khyber Pakhtunkhwa’s information minister Mian Iftikhar Hussain, reacting to the Taliban denial.

“All the victims happened to be civilians and the people know that the Taliban are behind these attacks,” Hussain said. “The people are well aware that the so-called Taliban militias are doing terrorism all over the country.”

Taliban spokesman Ihsanullah Ihsan was quoted in the media as saying that ‘foreign agencies’ were trying to malign the scholars by carrying out attacks on civilians. He even vowed that the Taliban would avenge the killing of innocent civilians.

Even the religious-political parties that once wholeheartedly supported the Taliban are now distancing themselves from the movement.

“We have seen that during the past three years, the Taliban have killed hundreds of innocent people, including women, children and the elderly, bringing a bad name to Islam,” the leader of a religious party told IPS, asking not to be named for fear of reprisals.

This religious leader said attacks on the chief of the Jamiat Ulema Islam political party, Maulana Fazlur Rehman, a former supporter of the Taliban, were carried out by the outlawed Tehreek-e-Taliban, Pakistan, which is sworn to fighting NATO-led forces in Afghanistan.

According to Pakistan’s interior minister Rehman Malik, some 30,000 Pakistani civilians have lost their lives in Taliban attacks in the last few years. Also, he said, more than 5,000 Pakistani security personnel have died in operations against the al-Qaeda and the Taliban.

“The new strategy of targeting security forces and sparing civilians will not work as the public has become sick of the Taliban, who continue destroying schools and music shops,” Maulana Kifayatullah, leader of a local mosque in Peshawar told IPS.