KIGALI, Jul 26 2011 (IPS) - Rwanda is the first country in the world where women outnumber men in parliament, with women occupying 45 out of 80 seats. However, despite this, experts say that the country still needs a gender equality perspective on how national resources and programmes are implemented. 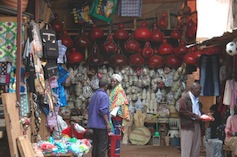 Rwanda wants women to access financial services and to gain skills to play a role in managing and allocating these resources. Credit: Aimable Twahirwa/IPS

“The move will help ensure government spending addresses the needs of women and men equitably,” said Susan Mutoni, referring to the situation in Rwanda. Mutoni is the project coordinator of gender responsive budgeting in Rwanda’s ministry of finance and economic planning.

Since 2009, the country has been part of a three-year pilot programme, the Gender Equitable Local Development (GELD), which is organised by U.N. Women and the United Nations Capital Development Fund.

It is dedicated to improve women’s access to resources and services at local level through gender responsive planning and budgeting. GELD runs in four other African countries as well: Mozambique, Senegal, Sierra Leone and Tanzania.

This includes the ability of rural women to find employment. In many areas communities believe that a woman must only fulfill a domestic role and “give service” to her husband, and should not be employed.

“There have always been reported cases related (to) cultural norms in rural areas where young girls are sometimes excluded from” inheritance, said Zaina Nyiramatama, the executive secretary of Haguruka, a local non-governmental organisation advocating the rights of women and children.

While it is illegal to deny a woman or girl the right to inherit, punishable by a fine or a prison sentence, women and girls are still denied the right because of their gender.

However, government and civil society are working to sensitise local communities about the importance of this.

The issue of bringing a gender perspective to how government resources and programmes are implemented was the key focus of an international high level meeting held in Kigali from 26 to 28 Jul. The meeting is being held in conjunction with the United Nations Entity for Gender Equality and the Empowerment of Women (U.N. Women) and the European Union.

Senior officials from a number of developing countries around the world and U.N. experts discussed the intricacies of their national strategies to ensure that local development is more gender equitable and supportive of the most excluded socio-economic groups.

Nyiramatama said that though women’s political participation and leadership is visible in Rwanda, there is also a need to look at promoting women’s economic empowerment through giving rural women access to microfinance services.

While Rwanda’s national policy emphasises that microfinance schemes for women should be decentralised to local areas, details about their daily management has always remained unclear.

In July 2009, government established the Women’s Fund, a credit scheme for women in Rwanda. Since then, at least 7,000 women have received assistance for micro and small enterprises from government, international donors and NGOs worth around 900,000 dollars, according to the central bank.

However, the regional programme director for U.N. Women in Rwanda, Diana Ofwona, observes that the allocation of funding should be done alongside equipping local administrative leaders with skills about gender responsive budgeting. This is because gender response budgeting is not only about accessing financial services, it is also about the equity role that women should play in managing and allocating these resources.

Both Ofwona and Nyiramatama agree that gender response budgeting is a paradigm on how women can play a major role in the social and economic transformation in a country like Rwanda, where 57 percent of the population live below the poverty line.

According to government statistics, 52 percent of Rwanda’s population are female, and a large portion of them are widows and/or single women, mostly engaged in income-generating activities on a full-time basis.

“The ownership of microfinance cooperatives (by local communities) is still a major challenge to strengthening rural women’s leadership in farming and other income-generating projects,” Ofwona said.

Residents in Bishenyi, a village 25 kilometres south of Kigali, say that two years ago a microfinance scheme was established to offer loans to the general population, but mostly targeting rural women farmers. However, it failed after six months because of mismanagement.

“We still think there is the possibility that (microfinance schemes) for women (will fail) if no adequate measures are adopted,” said 42-year-old farmer Tatiana Kankwanzi. She was referring to the fact that women needed to not only be beneficiaries of microfinance grants, but should also be part of the financial management and budgeting.

“Do you think these microfinance schemes have really benefitted women?” she asked IPS.

Rwanda has long been beset with problems related to a lack of expertise. Notably local authorities lack management skills to identify priorities and allocate resources.

Norah Matovu Winyi, the executive director of the African Women’s Development and Communication Network, a regional platform dedicated to sharing experiences, information and strategies among African women, said that the approach of gender responsive budgeting should be to know how public funds are raised, how they are used and to ensure that they reach target beneficiaries.

“It is imperative to diversify financial resources while associating gender-related issues with the needs and interests of the poor (and) other marginalised groups,” she said.

Policymakers argue that the approach of gender responsive budgeting is not merely about creating a special cooperative or financing schemes dedicated for women.

“People should not be confused about the term ‘gender’, but the main objective is to ensure that boys and girls within the existing revenues, expenditures and available financial resources are benefiting equitably,” Zohra Khan, an international expert in gender, told delegates at the meeting.