JUBA, Jul 19 2011 (IPS) - Being educated during the country’s civil war was almost impossible. But Victoria Maja wanted to become a doctor, and in order to do so she had to leave South Sudan and live and study in the north. She was one of the lucky ones. 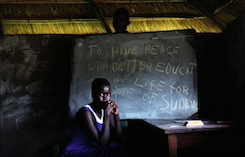 The issue of education in South Sudan is so critical that most leaders are calling on the youth to go back to school. Credit: John Robinson/IPS

Despite the fact that Maja had to face discrimination because of her ethnicity, she was one of the few South Sudanese of her generation who graduated from university.

“I studied medicine and was shocked to find that I graduated the bottom of my class because I was treated as a black African who could not pass examinations. I couldn’t practice medicine then because I couldn’t be registered,” Maja says.

So she and her husband fled to Egypt in 2000 and later to Australia, where she was able to practice medicine after completing a bridging course.

Now Maja wants to return home and help build her newly independent country. And she understands that one of the ways to do this is to ensure that others get an education too.

Because those who remained behind have not been as lucky as her. South Sudan has three generations of children who have never seen the inside of a classroom. According to Dr. Michael Hussein, the minister for general education, the education sector suffered most during the civil war.

“Teachers were neglected, salaries were not regular, there was no training and many fled the war-torn areas. As a result, three generations lost the opportunity to go to school,” says the minister.

The issue of education in South Sudan is so critical that most leaders are calling on the youth to go back to school.

Lieutenant General Daniel Akot, the Deputy Speaker of the national assembly is calling on his colleagues to pass relevant laws that will make it possible for all South Sudanese children to access education. “We have won the war with our enemy. Now the real war of fighting poverty, ignorance and hunger has started. We can’t achieve this when our children don’t go to school,” he says.

Hussein is urging the government to dedicate at least 20 percent of its national budget to his ministry. He said his ministry wants to build 6,000 primary and 3,000 secondary schools respectively.

“We have some areas that have 120 pupils per teacher, making learning impossible. One textbook is being shared among five pupils. We want to recruit many teachers, train more of them. We welcome those of our citizens who fled the country and (were educated) around the world to come back and bridge the big gap of a lack of personnel,” says Hussein.

But there remains about two million young South Sudanese who have not attended school, against an acute shortage of teachers. The government is working with its neighbours, like Kenya, to provide it with teachers. Kenya has over 70,000 unemployed trained teachers.

The minister says that since 2005 the government has developed its own system of education: an 8-4- 4 system that requires learners to finish eight years at primary school, four at secondary school and four at university.

“We have developed a system that is inclusive and expansive to make sure that every child accesses basic education, which is a fundamental human right. We are also employing female teachers to act as role models to young girls so that many of them can go to school,” says the minister.

The ministry is also providing special education and technical training for those older than school-going age.

“We realise that those who missed out on education (should) get a second chance. We are offering alternative education to them. Those who are 18 years and above (attend) school for four years and sit (for) primary examinations. Those who pass join secondary schools and those who don’t, join technical colleges. So far we have 5,753 pupils in this programme,” Hussein says.

Kathy Kamphoefner, the South Sudanese secretariat coordinator for the non-governmental Human Rights Forum, says 90 percent of the people who live in rural areas are illiterate and has called on government to prioritise education so that the country can realise meaningful development.

“Most of the communities lack basic needs and it will require a lot of time to change their way of thinking so that they can go to school. The government should also improve the infrastructure to open up the rural areas that cannot be reached during the rainy season so that sponsors can build schools in those areas,” Kamphoefner says.

Professor Matthew Udo, the undersecretary in the ministry of co-operative and rural development, is urging the youth to go to school and form unions in rural areas. He wants them to embrace agriculture as a form of employment and food provision.

His sentiments are echoed by Rebecca Garang, the widow of the late vice-president of South Sudan, Dr. John Garang. She has started her own school.

“I have lived through many years of war and I know that it is only through education that our society can grow. The government should make sure that all its resources are geared towards fighting ignorance,” she says.