MONTREAL, Canada , Sep 30 2011 (IPS) - Assassinations, intimidation and disappearances were the manifestations of civil society repression in Africa, but this may be changing as the crackdown on civil society is becoming more formally accepted and increasingly “by the book”, according to Ingrid Srinath, secretary general of the global civil society network, CIVICUS. 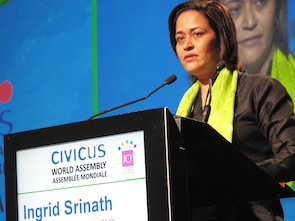 In the last two years, CIVICUS’ Civil Society Watch Programme has responded to civil society in more than 90 countries worldwide. In Africa, countries are increasingly using legislation, including laws governing homosexuality, treason and access to information, to hamper non-governmental mobilisation, said Srinath, who previously headed up the child rights organisation Child Rights and You in her native India before taking the helm at CIVICUS.

In response to the crackdown, which Srinath links to the global economic recession, CIVICUS has established a Crisis Response Fund. Threatened civil society organisations from around the world can apply to the fund for money to support activities such as documentation of human rights abuses as well as related advocacy and training.

As South Africa continues to debate a controversial protection of information bill recently withdrawn from parliamentary consideration for further discussion after public protest, Srinath spoke to IPS about the civil society crackdown in Africa.

Q: You have spoken recently about a global crackdown on civil society, what does that crackdown look like in Africa? A: In Africa, the clampdown takes a few different forms. A large part of it is legislation, so whether it is … the anti-homosexuality bill in Uganda or this new protection of information legislation in South Africa, there is a legislative pushback to constrain freedom of expression, association, and assembly. Then there is the outright what you might call “extra judiciary” measures – the assassinations, intimidation, torture – that is more a factor in Zimbabwe or too many countries to actually list.

Finally, there is this constant undermining or erosion of civil society by these constant attacks on accountability. Every African government official I have met will make the accusation, “who are these civil society people accountable to anyway? We get elected, who elected them?” which is such a specious argument.

Q: Is civil society equipped to legally contest these legislations? A: There is actually very good legal support available… from Lawyers for Human Rights, the International Centre for Not-for-Profit Law, (and) CIVICUS itself has a number of toolkits and can model legislations. If you have a new legislation in your country and you want someone to analyse it for you and come back with a critique of it, CIVICUS and a number of other organisations have that capacity and are willing to do that.

The second connection is where once the international community might have been willing to intervene previously…post financial crises geopolitics means that certain countries with very large markets, or who are large providers of capital or natural resources – especially energy – can now get away with it where they could not a few years ago. Simultaneously of course, civil society has less resources to fight back.

Q: What are the top three African countries experiencing the worst civil society clampdown? A: Zambia, Ethiopia and Swaziland. The situation across these countries is bad but, in some ways, the lowering of standards in South Africa has a worse long-term impact than the more direct repressing than you’re seeing in Ethiopia because that lowers the bar for everybody and then everybody pays a price. Whereas a particularly repressive (Robert) Mugabe is really bad for Zimbabweans but has no trickle over effects to other parts of the continent.

Q: How would you characterise the African Union’s response to growing repression of the continent’s civil society? A: I have not seen the African Union doing anything with any degree of responsiveness, principle or just even good strategy. Whether it was Libya or anywhere, they were the last to respond and had the weakest response. I think there’s an opportunity here for the AU to re-invent itself in a post Arab spring moment. I am not immediately sensing that there is that kind of leadership. There is the opportunity if someone is willing to exercise that leadership.

Q: Have you seen coping strategies emerge within civil society to these kinds of threats? A: I think we have gotten better at calling on each other. Whether with (what has happened in) Uganda, Zambia, Swaziland, Zimbabwe or Ethiopia, there has been an ability to reach out across national borders to get advice, solidarity, advocacy, and political pressure from other African countries. I think we are getting slightly better at documenting the crackdown. Across these countries you are seeing persuasive, authentic data that allows you to make a stronger case.

One of the missing pieces is more pan-African civil society networks, there are a couple but we need more and perhaps networks focused on (the crackdown).