Women in Rural Argentina Speak Out on Climate Change

RESISTENCIA, Argentina, Oct 13 2011 (IPS) - Rural and indigenous women in northern Argentina, hit hard by the expanding agricultural frontier, deforestation and the spraying of toxic pesticides, spoke out about their problems and set forth proposals for discussion at the next global summit on climate change. 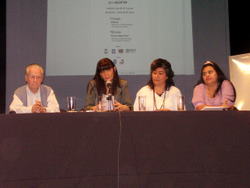 A provincial official (speaking) and the members of the Tribunal at the opening of the Hearing. Credit: Marcela Valente /IPS

They did so at the Women’s Hearing on Gender and Climate Justice 2011-Argentina, held Tuesday Oct. 11 in Resistencia, the capital of Chaco province, 950 km north of Buenos Aires, attended by representatives of organisations from the northern 10 of the country’s 23 provinces.

These women are on the front line of indiscriminate logging, erosion, loss of biodiversity, drought, floods and pesticide pollution. They are all too familiar with the impact of the productive model that is exacerbating global warming, and they are demanding a stop to it.

“When the trees are cut down, we lose the rain, we lose everything, we are left without water, without firewood and without crops,” said Basilea Barrientos from Colonia Aborigen, in Chaco. “Our community has always believed that when resources are used, they must be replaced.”

“When the forests are felled, the wind blows the soil away, cold and heat become extreme, campesinos (small farmers) emigrate and agribusiness companies fumigate us,” Jorgelina Córdoba, of the Indigenous Campesino Assembly of Formosa province, told IPS.

Córdoba is well aware of what she is talking about. A widow with 11 children, she lives in the place where she was born, Bañado La Estrella (a wetland created by annual flooding of the Pilcomayo river), where she leads the resistance against the encroaching bulldozers.

“We know how to raise cattle on arid land, but now the campesinos are leaving, and the trees on their lands are being felled to make way for soy,” she complained.

Soy is now Argentina’s top export crop; the transgenic variety resistant to glyphosate, an herbicide, is grown on a large scale for export to Asia. However, spraying with glyphosate destroys biodiversity and harms human health.

Cándida Fernández of the Formosa Campesino Movement told IPS that in her village, Loma Senés, children are being born with malformations caused by the toxic herbicide. Local people are also being affected by the spread of cattle feedlots.

Unlike traditional ranching in Argentina, in which cattle range freely and feed on natural pasture, expansion of soy crops has caused cattle to be raised in feedlots where the animals are confined in pens and fed on grains. “The smell is unbearable, and they are only metres away from houses and the school,” Fernández said.

Next to the fields where small farmers grow crops using sustainable techniques, waste channels from feedlots carry endless flows of animal dung, urine, and even carcasses.

The hearing was convened by Global Call to Action against Poverty (GCAP), a coalition of NGOs, and the Feminist Task Force, affiliated to GCAP, which works on underlining poverty as a women’s issue and calls for “gender equality to end poverty.”

Similar hearings and tribunals will be held in October and November in another 14 countries in Latin America, Africa and Asia, as part of the “Strengthening Voices: Search for Solutions” 2011 Women’s Tribunals.

In Argentina the hearing was organised by the Institute for Social Development and Human Promotion (INDES) which is part of the Encuentro network, a member of GCAP. In an interview with IPS, INDES representative Analía Delssin said the aim is for the conclusions and contributions of the hearing to reach decision-makers at national and global level.

The hearing was presided over by a tribunal made up of one member of INDES and two women from organisations affiliated to GCAP.

A report documenting the women’s testimonies and proposals will be drawn up and sent to the 17th Conference of the Parties to the United Nations Framework Convention on Climate Change (COP 17), to be held in Durban, South Africa Nov. 28-Dec. 9.

Delssin said climate justice is about highlighting the fact that some groups are more vulnerable to climate change than others. Among the more vulnerable groups are women, and especially rural women. “They have to walk further to fetch water, firewood, and craft materials, and they struggle to care for their sick children who get respiratory illnesses from exposure to pollution,” she said.

But women are also the people who are most knowledgeable about the problem, and they are part of the solution, so they should participate when decisions are taken about measures and financing for adaptation and mitigation of the effects of climate change. In fact, several women brought valuable experiences of mitigation to the hearing, such as teachers in rural schools in Chaco, who are developing educational programmes to promote sustainable farming based on agroecological principles, in spite of resistance from neighbours who farm in the traditional way.

Lucrecia Marcelli, head of the School of Family Agriculture in the Chaco town of General San Martín, said that her secondary level students have an organic vegetable garden, and have shown neighbouring producers that cotton can be grown without the chemicals that the other farmers use to the detriment of the school.

Maria Amelia Bertoldi, from a primary school near Pampa del Infierno, in Chaco, talked about a programme to train “eco-guardians” to protect the environment. They are students and teachers who take part in studying and analysing toxic agricultural chemicals, environmental laws and other activities to promote eco-friendly development.

Examples of eco-friendly agricultural production were also presented, for instance by Zunilde Poggio of the Bella Vista Ecological Association, in a rural area in Corrientes province, where some 20 families produce natural foods.

“The goals of agroecology are food sovereignty, respect for biodiversity and natural resources, avoidance of toxic chemicals and of air, water and soil pollution. And it is not large-scale farming, it does not use hired labour but instead encourages families to stay rooted to the land,” she told IPS.

However, this form of environmentally friendly farming is under threat. “We have three large rice plantations nearby, where they use pesticides, and we have not been able to get the 1994 law against toxic agricultural chemicals enforced,” Poggio complained.

“We must change the large-scale agricultural production model, which causes pollution and employs only a few people. That is what summits like Durban are for,” she said.

And it is the Durban summit that the dozens of rural women – whose meeting in Resistencia was held just ahead of the International Day of Rural Women, to be celebrated Oct. 15 – are determined to reach with their proposals and testimonies about the impacts they are already feeling on their environment, production and way of life.