SALVADOR, Brazil, Nov 9 2011 (IPS) - Fighting malnutrition is not just about putting food on everyone’s table every day, according to Brazil’s Fourth National Conference on Food and Nutrition Security, meeting in the capital of the northeastern state of Bahia. 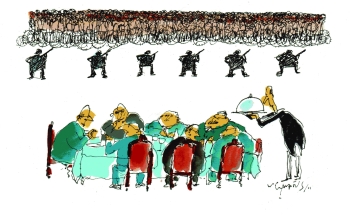 The conference, being held Nov. 7-10, is the first such event to be convened after the right to food was enshrined in the constitution last year.

Organised by the National Council for Food and Nutrition Security (CONSEA), which works at federal, state and municipal government levels and with civil society organisations, the conference motto is “Adequate and Healthy Food: A Right of All.”

“It’s time to analyse the progress made and tackle the new challenges,” said Renato Maluf, the head of CONSEA, who called on the 2,000 Brazilian conference participants to sign “an overarching agreement for food sovereignty and security and for promoting the human right to adequate nutrition.”

During former president Luiz Inácio Lula da Silva’s eight years in office (2003-2011), programmes to transfer income to poor families and combat hunger helped raise over 20 million people out of poverty and reduce child malnutrition by 61 percent in this country of 192 million people.

Other initiatives, like the school meals programme which reaches 47 million children and teenagers, 30 percent of the food for which is purchased from local family farms, have stimulated local economies and improved other health and education indicators.

“These are no longer just affirmative action policies. No one doubts Brazil’s commitment to fighting hunger and to the development of the country,” said José Graziano da Silva, director-general elect of the Food and Agriculture Organisation (FAO), who was one of the architects of these policies at the beginning of the Lula administration.

Brazil’s experience equips it to make “contributions to social technology” in the wider world, he said.

But Maluf admitted to IPS that, while there has been “a significant reduction in absolute hunger,” there is still some evidence of insufficient food intake, especially among the most vulnerable groups like indigenous people and “quilombola” communities, made up of the descendants of escaped African slaves.

Indigenous Guaraní delegate Delisso Santos Martins, from the southwestern state of Mato Grosso do Sul, told IPS that food and nutrition problems in his community are aggravated by the loss of their ancestral lands. “We have no land to farm, and buying in food from outside is expensive,” he complained.

Maluf also spoke about the nutritional quality of the food that people eat.

“Our analysis is moving towards less emphasis on overall hunger, and more on specific nutritional deficiencies caused by the lack of certain nutritional components or micronutrients needed in the diet, like vitamins or trace elements,” he said.

Lawyer Leonardo Ribas, a food security adviser in the southern state of Rio de Janeiro, mentioned a qualitative research study commissioned by the Ministry of Social Development and the Fight Against Hunger, which found micronutrient deficiencies among beneficiaries of the Bolsa Familia (Family Grant) programme, a cash transfer programme for poor families conditional on regular school attendance and health check-ups.

“The results indicated that as income has increased, beneficiaries’ access to food has improved, but some families continue to experience food insecurity,” Ribas told IPS.

One explanation, among others, is that “the foods they were able to buy were more highly processed and industrialised, and therefore insecure from the nutritional point of view,” he said.

In Ribas’ view it is necessary to stimulate production of locally abundant foods that are adapted to local customs, such as wild fruit, which would also promote access to more nutritious and cheaper food.

This conference is the first of its kind organised by the government of President Dilma Rousseff, who, like Lula, belongs to the leftwing Workers’ Party (PT). Rousseff launched the “Brazil Without Poverty” programme, which aims to reach 16 million people who are still living in extreme poverty.

But anti-poverty efforts date back to before the PT came to power. Since the First Conference on Food and Nutrition Security was held in 1994, three important goals have been achieved thanks to joint action by governments and civil society in CONSEA, according to Social Development Minister Tereza Campello.

The first was to place the fight against hunger squarely at the centre of the government agenda; the second was to boost small-scale family farming, which supplies food to the most vulnerable population and improves the rural economy; and the third was to build “an effective alternative for a new model of economic development that guarantees the social inclusion of millions of Brazilians,” said Campello.

The CONSEA conference is attempting to establish a National Food Security System in every state, and is also addressing the issue of the country’s heavy use of toxic agrochemicals.

Brazil, a major agricultural producer, uses more herbicides, fungicides and pesticides than any other country in the world.

“We cannot have family farming alongside agribusiness. We can’t have quality foods when the food contains toxic pesticides,” said small farmer Alayde de Souza, who works as a babassu breaker, opening up the coconuts from babassu palms, in the northern state of Maranhão.

The conference will also discuss production of transgenic grains, and obesity, “a serious nutritional problem in Brazil that is already a public health issue, especially among the poor,” said Maluf.

According to the health ministry, 49 percent of Brazilians are overweight and 16 percent are obese.

Other groups at the conference will address global issues, such as the soaring price of food, which also affects Brazil. “We cannot eradicate extreme poverty with rising food prices,” Maluf concluded.