BANGKOK, Nov 3 2011 (IPS) - This sinking mega-city’s eight million people are paying the price of ignoring warnings over many years concerning its climate vulnerability and the incapacity of its soggy foundations to handle flooding. 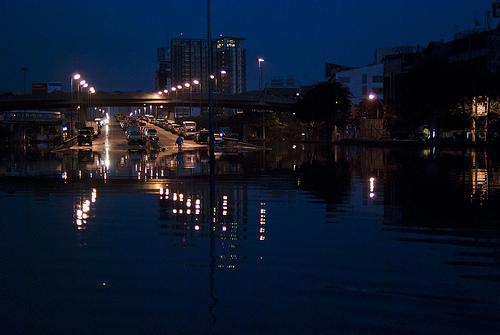 For over a week now large swathes of the Thai capital, built on a flat marshy delta with some sections below sea level, have been submerged by floodwaters. Streets have turned into rivers, with boats and bamboo rafts ferrying desperate families.

Only the upper floors of houses, factories and shopping malls are now visible with no sign of the waters receding in the next few weeks.

Anupong Taduon, scratches his head for answers to a deluge that has affected thousands. “The water level has not dropped since the first day,” says the 52-year-old from behind the sandbagged entrance to his karaoke bar. “We may have to live like this for three or four weeks.”

Warnings by the kingdom’s central government and local authorities that the worst is not over are greeted with anger and frustration. It is common knowledge that this tsunami in slow motion must flow through the city before it can drain out into the Gulf of Thailand.

After all, flood management experts have warned that the city – complacent in its economic prosperity visible in the constantly changing skyline – is one of the Southeast Asian capitals most vulnerable to climate change.

“Bangkok is particularly vulnerable when compared with other cities like Manila, Jakarta or Kuala Lumpur,” says Aslam Perwaiz, head of disaster risk management at the Bangkok-based Asian Disaster Preparedness Centre. “The current floods confirm concerns about the need to improve the city’s water management.”

“The record of bad floods in the past show that Bangkok’s water channels are unable to drain inundated streets and neighbourhoods for weeks,” Perwaiz told IPS. “Floods have lasted for nine weeks in this city.”

“Bangkok ranks first in the climate vulnerability ratings of (all provinces) in Thailand,” says Hermina Francisco, director of the Economy and Environment Programme for Southeast Asia, a Singapore-based research group. “The high degree of vulnerability of Bangkok is due largely to high exposure to frequent flooding and sea-level rises.”

“What is probably making the situation even more serious is the claim that Bangkok is sinking,” she told IPS. “(It has been) observed in parts of Bangkok, probably more visible than in other (places), and is something that has been taking place for many years now.”

A reminder of this city’s inability to cope with major flooding was made in February by a team of Dutch water management after surveying Bangkok’s flood defences, pronouncing the flood protection networks inadequate.

“Current flood protection levels for urban areas like Bangkok amount to one percent flooding probability in any given year, which is relatively low by international comparison,” the Netherlands Water Partnership (NWP) noted in a report. “For a large metropolitan area like Bangkok …we anticipated much better flood protection.”

The NWP’s warning was to prove prescient eight months later, with both national and local government officials giving mixed messages and appearing increasingly helpless at saving Bangkok from six billion cubic metres of water bearing down on it in a sheet.

Nearly 400 people have died and some 2.5 million displaced in Bangkok and the provinces to its north since this natural disaster began to unfold following heavy monsoon rains, three tropical storms and a typhoon three months ago.

The city’s much talked about network of canals, which earned it the name “Venice of the East,” has proved inadequate. Most of the 1,650 ‘khlongs,’ as the waterways are known, are either brimming with water or overflowing.

Yet, many of the khlongs, including the 100 navigable ones that helped Bangkok tide over a severe flood in 1940, have been filled in to make way for roads and high-rise buildings and accommodate an economic boom that began in the 1970s.

Recommendations that the canals should not be filled in to accommodate vehicular traffic were ignored, says George Olson, a former corporate manager of a United States engineering firm that had worked on flood protection projects in Bangkok.

That negligence “certainly made all the floods after 1974 much worse for the Bangkok metropolitan area,” said Olson. “The recommendations to build waste water and flood protection tunnels were also met with limited approval.”