WASHINGTON, Nov 2 2011 (IPS) - U.S. Special Operations Forces (SOF) killed well over 1,500 civilians in night raids in less than 10 months in 2010 and early 2011, analysis of official statistics on the raids released by the U.S.-NATO command reveals. 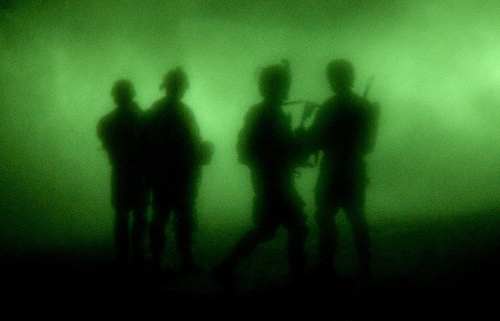 U.S. soldiers dismount from their vehicle and prepare to raid a series of compounds in the Maywand District of Afghanistan on Nov. 22, 2010. Credit: U.S. Army/CC BY 2.0

Except for a relatively few women and children killed by accident, the civilians who died in the raids were all adult males who were counted as insurgents in press releases and official data released by the International Security Assistance Force (ISAF).

The data on night raids, which were given to selected news media, cover three distinct 90-day night raid campaigns from May through July 2010, early August to early November, and mid-November to mid- February. The combined totals for the three periods indicate that a minimum of 2,599 rank and file insurgents were killed and an additional 723 “leaders” killed or captured in raids. [See Sidebar].

Assuming conservatively that one-third of the alleged leaders were killed, the total number of alleged insurgents killed in the raids was 2,844.

ISAF has leaked a set of statistics on insurgents killed in night raids published in major news outlets covering three 90- day campaigns of night raids. In August 2010, ISAF released figures to the Washington Post showing that 1,031 rank and file insurgents had been killed from May through July. In November 2010 the New York Times reported a total of 968 rank and file insurgents killed in the three months from Aug. 11 through Nov. 11.

The Washington Post and New York Times articles also reported 355 and 368 "leaders" killed or captured during the May-July and August-November periods, totaling 723.

The sum of the totals of 2,599 alleged insurgents and 245 alleged "leaders" assumed to have been killed in the raids comes to 2,844.

Those subtotals add up to 6,282 night raids for the entire 10 months.


SOF night raids during the 10-month period totaled 6,282, according to the same ISAF data.

A third crucial statistic, repeated frequently by U.S and NATO officials in 2010 and 2011, is that shots were fired by SOF units in only 20 percent of night raids.

A U.S. military source who has been briefed on SOF operation confirmed to IPS what has been generally known among outside observers – that anytime shots are fired by SOF troops in a night raid, someone is killed.

With very rare exceptions, night raids target only individuals rather than groups. They are carried out at night because they are aimed at catching the individual at home asleep and therefore taken completely by surprise.

Therefore, a minimum of 1,588 people (2,844 total killed minus the 1,256 targets in the lethal raids) were killed in the raids even though they weren’t targeted.

Not every one of the untargeted individuals killed in night raids was a noncombatant civilian. But the socio-cultural and physical setting of the raids guarantees that the percentage of civilians in that total is extremely high.

Within the Afghan compounds that are the physical targets of U.S. night raids live extended family households that normally include not only the male head of family and his wife, but his brothers, sons and cousins and their families.

In Afghanistan, every adult Pashtun male has a weapon in his home, and is obliged by the ancient code of conduct called “Pashtunwali” to defend his home, his family and his friends against armed intruders. In a typical extended family compound, several males have weapons.

As a result, the non-targeted civilians killed in night raids have invariably been either close relatives or neighbours who have come out to assist against an armed assault.

SOF commanders and the command and staff of the International Security Assistance Force (ISAF) have essentially denied all civilian deaths in night raids, except for women and children, by counting all adult males killed in raids as insurgents.

That ISAF policy has been confirmed to IPS by a U.S. military source briefed on the operational aspects of the raids.

ISAF has counted adult dead in raids as insurgents even when the victims held prominent positions in the Afghan government, as was the case in the Gardez night raid of Feb. 12, 2010.

In that raid, two men who were shot dead in the targeted compound by an SOF unit when they came out of their dwellings with Kalashnikov rifles turned out to have been a district prosecutor and a local police chief. Nevertheless, ISAF reported in its press release on the raid that two insurgents had been killed.

The killing of family members and neighbours who responded to night raids with weapons was already a major issue within the U.S. mission to Afghanistan as early as 2008, according to Matthew Hoh, who was the senior U.S. civilian official in Zabul province in 2009.

“Pashtunwali was causing serious problems for us in the context of night raids,” Hoh told IPS. “It was raised as a key issue in our training even before I went to Afghanistan.”

The problem had become so prevalent by early 2010 that Gen. Stanley A. McChrystal referred to it explicitly in his early 2010 directive on night raids, parts of which were released to the public by ISAF Mar. 5, 2010.

McChrystal noted that the Afghan adult male had been “conditioned to respond aggressively in defense of his home and his guests whenever he perceives his home or honor threatened. In a similar situation most of us would do the same.”

McChrystal expressed regret that these “[i]nstinctive responses by an Afghan man to defend his home and family are sometimes interpreted as insurgent acts, with tragic results.”

Although a large proportion of those targeted in the estimated 1,256 lethal raids were undoubtedly Taliban insurgents, a very substantial proportion were civilians.

Some were targeted after malicious tips by tribal and personal enemies. Others fell victim to a targeting system that is overwhelmingly dependent on electronic intelligence. Phone calls to a known insurgent are regarded as a basis for adding a cell phone number to the “kill/capture list”.

One detainee picked up in a night raid earlier this year was told by his interrogator that it was because he had made phone calls to an insurgent, IPS learned from a friend of the detainee’s family.

Hoh, who was briefed on the list, called the Joint Priority Effects List (JPEL) in 2009, told this writer that a large proportion of the targets on the list were not identifiable individuals at all, but mobile phone numbers.

But in the Pashtun zones of Afghanistan, contacts with Taliban commanders and other Taliban figures are nearly universal, according to Michael Semple, former deputy EU representative in Afghanistan and a leading specialist on the Afghan insurgency.

In addition, SOF commanders have begun consciously targeting individuals who were not believed to be insurgents but who were believed to have provided moral or material support, or to have intelligence information about them.

That targeting shift, acknowledged by military officials to the authors of a recent study by the Open Society Foundations and The Liaison Office, was reflected in an 82-percent increase in the number of people seized in raids and detained briefly during the August- November campaign, compared with the May-July campaign.

Those detainees were also counted as insurgents in the data released to the news media, despite the fact that up to 90 percent of them were released as civilians within days or months, as IPS reported last June.

Some of those targeted civilians were killed in raids when they appeared to challenge the SOF intruders, adding to the 1,588 non- targeted individuals killed in the raids. However, estimating the additional toll of civilians is impossible.

The ISAF Public Affairs Officer for SOF issues and officials responsible for civilian casualties monitoring at the U.N. Assistance Mission in Afghanistan did not respond to requests for comment on this article.

Afghan human rights officials and foreign observers have suggested that fewer civilian deaths have occurred in night raids with the increasing use of the so-called “soft knock”, in which Afghan personnel are used to announce the presence of the raiding party with a loudspeaker before entry into the house.

The toll of civilians in more recent 90-day periods may well have been reduced in 2011 compared with a year earlier, as suggested by smaller numbers of alleged insurgents said to have been killed over the course of the three campaigns.

But night raids clearly remain the overwhelmingly primary – though still unacknowledged – cause of civilian deaths in the war.