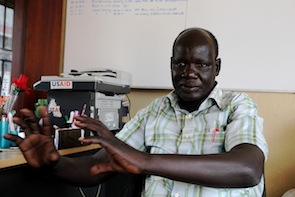 James Ninrew vividly remembers the day Sudan’s military attacked his community, which had the misfortune of living above vast oil reserves consigned to a consortium led by the Swedish oil giant, Lundin Oil.

“They used helicopter gunships to bomb houses,” the reverend and civil society leader recalled of the January 2000 attack, in Koch, Unity state. An elderly man and his wife were killed in the attack. “When the houses were on fire, the helicopter gunship landed and the soldiers came out and shot these people.”

Such accusations form part of the basis of a report that has recently prompted Sweden’s public prosecutor, Magnus Elving, to launch an investigation that could lead to a criminal case against Lundin Oil.

The 2010 report by the European Coalition on Oil in Sudan (ECOS) alleges that Lundin may be culpable for atrocities committed against civilians by military and militia forces in areas where it operated. Lundin headed a consortium that included Malaysian, Sudanese and Austrian companies, which signed an oil contract with the government in 1997.

“The start of oil exploitation set off a vicious war in the area,” according to the report, which says almost 200,000 people were forced from their land and thousands were killed, while other crimes included arson, looting, rape and torture.

“The forced displacement was motivated by the desire to secure oil fields for the purpose of exploitation,” said ECOS. The report called on Sweden, Austria and Malaysia to investigate whether the companies “may have been complicit in the commission of war crimes and crimes against humanity.” Although Elving has not named Lundin as the subject of his investigation, he has stated publicly that it was prompted by the ECOS report. Prosecutors have begun interviewing 40 people who have not been named.

At the time of the alleged crimes, Lundin’s board of directors included Sweden’s current foreign minister, Carl Bildt. Elving has told Swedish media that Bildt is not among the 40, but refused to comment on whether he could be questioned later in the investigation.

Lundin has repeatedly rejected allegations made by ECOS. “There is no new evidence in this report; it essentially reiterates inferences, insinuations and false allegations based on partisan and misleading information,” Ian Lundin, chair of the board of directors wrote in a letter to shareholders after the release of the report.

In 2003, Lundin commissioned a paper to refute allegations that it had been involved in human rights abuses.

The paper pointed out that Lundin consulted community leaders as well as local and central government officials before undertaking operations. The company determined that an oil industry would be of benefit to local communities, and it spent 1.7 million dollars in three years on development projects.

Kathelijne Schenkel of ECOS said in an interview that most of those consulted by Lundin were in fact “important military-political leaders in the area who at the time were allies of the Government in Khartoum.” She called the 1.7 million dollars Lundin spent on development a “ridiculous sum” compared to the damages it brought to the area.

Lundin has argued that it operated under the assumption that oil wealth could help bring peace to a country that was in the midst of a two-decade civil war, which ended in 2005 and led to South Sudan declaring independence this past July.

“During the period in which the company was active in Sudan, it operated in the belief that oil could benefit the economic development of the area and the country as a whole, and that this would have a catalysing effect on the peace process,” wrote Christine Batruch in the 2003 paper produced by Lundin.

ECOS rejected the argument that the company could have been ignorant of the massive human rights abuses that accompanied that start of oil operations. The report points out that Lundin had been involved in the oil business in Sudan for six years before it signed a deal with the government to explore the area known as Block 5A. By that time the government had a brutal reputation for targeting civilians “as a means of warfare and to secure oil operations”.

Ninrew said the brutal and systematic nature of the government’s operations in advance of the oil industry was obvious to anyone in the area. The government would begin by indiscriminant bombing, driving many from their homes. This would be followed by helicopter gunships flying low in order to attack those that remained.

“The third step was sending ground troops coming in vehicles and coming on foot to make sure no more people were there,” said Ninrew.

Soldiers would then establish posts just beyond the area they wanted to control, he said. After that, the machinery and the surveyors would arrive. Once they were done their work, the pattern would be repeated as the oil company expanded into territory falling under its concession.

Ninrew said he hopes the investigation in Sweden will lead to a criminal case, although he pointed out that it would not necessarily mean compensation. He said the Swedish government should pressure Lundin to compensate affected communities by building schools, clinics and roads.

Ninrew said that even if compensation is not forthcoming, a criminal case against Lundin could have the benefit of preventing future abuses.

“It may serve as a lesson to other companies that want to come to South Sudan and other countries in Africa,” he said. “We want to put an end to those oil companies coming to an area and doing whatever they like without the consent of the local people living in the place.”