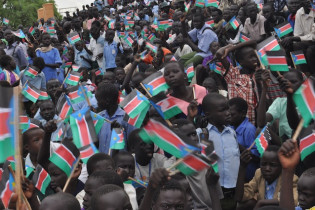 By Jared Ferrie
Since age 18, Zechariah Manyok Biar fought in the revolutionary army that won South Sudan’s independence from Sudan in July 2011. But now the 28-year-old is in exile from the country he helped liberate.

By Jared Ferrie
The huge Russian-made helicopter descended slowly towards conical mud huts clustered together and surrounded by endless grassland, lush and green with the season’s rains here in the South Sudanese village of Yuai.

By Jared Ferrie
Sudanese refugees have started dying as a camp in South Sudan ran out of water four days ago after a massive influx of people fled across the border to escape war and hunger.

By Jared Ferrie
Hamid Yussef Bashir said he walked for 17 days with his wife and five children to get to a refugee camp in South Sudan. Here in Jamam, they joined about 37,000 other people who fled from the war across the border in Sudan’s Blue Nile state.

By Jared Ferrie
As Sudan and South Sudan meet for the latest round of negotiations featuring oil as a key issue this week, four ships loaded by Khartoum with southern crude are carrying their disputed cargoes to unknown buyers.

By Jared Ferrie
In the ward of a partially destroyed clinic, Mangiro (who did not give his last name) sat on a bed next to his wounded nine-year-old daughter, Ngathin. The little girl is fortunate, she survived the recent inter-ethnic clashes in Pibor county that killed her mother and sisters.

By Jared Ferrie
In the sprawling settlement of Yida, just south of the Sudan border, more than 20,000 people have gathered after fleeing battles in the country's Southern Kordofan state. But they now find themselves caught up in a new conflict, as recent clashes along the frontier have some warning of the possibility of war.

By Jared Ferrie
Joyous reunions accompanied the latest batch of South Sudanese returning from Sudan to their newly independent homeland. But the returnees will face huge challenges integrating into South Sudan, which became the world's newest nation on Jul. 9, but also one of the poorest.