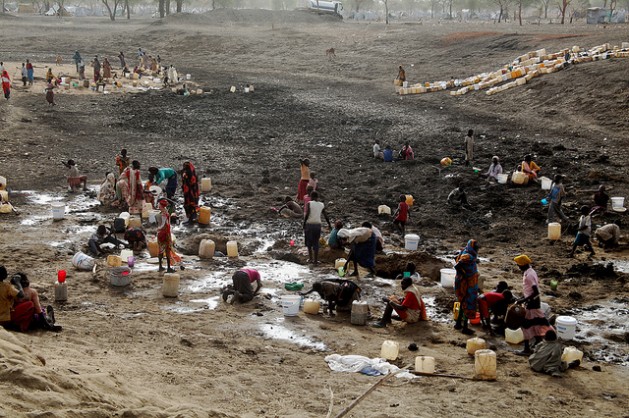 JUBA, Jun 14 2012 (IPS) - Sudanese refugees have started dying as a camp in South Sudan ran out of water four days ago after a massive influx of people fled across the border to escape war and hunger.

The refugees are fleeing Sudan’s Blue Nile state where insurgents are fighting to overthrow the Sudanese government.

Human Rights Watch (HRW) said earlier in an April report that civilians are suffering from an indiscriminate aerial bombing campaign.

Voitek Asztabski, an emergency coordinator with Medicines Sans Frontiers (MSF), said some refugees died as they walked seven to 10 hours to a new site in search of water after camp Kilometer 48 in South Sudan’s Upper Nile state ran out of it on Jun 11.

The agency is still carrying out a mortality survey to find out how many adults and children have died and what the causes are. However, MSF estimates that an average of five to 10 people have died each day since water ran out at the Kilometer 48 camp.

MSF said in a statement on Jun. 13 that “the 15,000 refugees remaining at this location walked en masse the 25 km to the nearest location with available water.”

Heavy rains prevented agencies from moving them by truck on flooded roads.

“We observed people dying of thirst, of dehydration,” Asztabski said by satellite phone from camp Kilometer 18, the new site with limited available water. “That was quite a horrifying activity being witnessed by us here.”

Some people were too weak to respond to medical care.

“We went early on Tuesday morning to provide medical assistance and rehydration points along the route,” said MSF’s Dr. Erna Rijnierse in the statement.

“It was a truly shocking sight as we witnessed some of the weakest dying as they walked – too dehydrated for even the most urgent medical care to save them.”

There are now 105,000 Sudanese refugees from Blue Nile state in South Sudan’s Upper Nile state, according the United Nations refugee agency, UNHCR, while another 15,000 are on their way.

Asztabski said that refugees are arriving malnourished, dehydrated and diseased after walking from their homes in Blue Nile. Common conditions include pneumonia and other respiratory infections contracted from sleeping outdoors without any shelter, as well as diarrhoea from drinking contaminated water.

He called for a “proactive” approach to the crisis, saying that agencies have instead been reacting to the emergency without putting contingency plans in place. For example, there is no plan for what to do after water runs out at camp Kilometer 18, which will likely happen in about two and a half weeks.

Aid agencies have been warning for months that refugees needed to be relocated before potable water ran out and the rainy season began, making transport extremely difficult. In March, Andrew Omale, an emergency coordinator with Oxfam International, told IPS that the refugee situation in Upper Nile was a “forgotten emergency” and called for more support.

Asztabski said agencies continue to be hampered by a lack of capacity and resources. He compared the scale of the crisis to an area in Ethiopia where he was based last year when famine in Somalia sent refugees over the border into that country as well as Kenya. About 10 million people were affected by the drought in the Horn of Africa. But he said there are fewer resources available for this emergency.

“Everyone is overstretched in this situation,” said Asztabski. “This crisis needs more attention, more investment.”

The refugees began streaming from Blue Nile into South Sudan and Ethiopia in early September after Sudan ousted Blue Nile’s elected state governor, Malik Agar, and replaced him with a military appointee. Agar’s forces have been fighting the government since then, and HRW says civilians have borne the brunt of military abuses.

In its April report, HRW documented reported violations against civilians including arbitrary detention, extrajudicial killings, beatings and torture. HRW said government forces targeted people they suspected of connections to the group led by Agar, which is known as the Sudan Peoples Liberation Movement-North (SPLM-N).

The SPLM-N is active in Blue Nile as well as neighbouring Southern Kordofan state, where the U.N. says 47,000 refugees have fled across the border into South Sudan’s Unity state.

The rebels were formerly part of the SPLM, which fought a two-decade civil war against Khartoum that resulted in South Sudan’s secession. When the South declared independence last July, the SPLM in Southern Kordofan and Blue Nile added “North” to their name and declared themselves a separate political party in Sudan. But the SPLM-N took up arms again after accusing Khartoum of cracking down on them.

Sudan has repeatedly denied targeting civilians during its fight against the SPLM-N. But rights groups as well as the British and United States governments have called on Khartoum to stop bombing civilians.

Asztabski said refugees also tell of fleeing the bombing with very few possessions and having to walk for as many as two months to reach the border. “They are telling us horrific stories,” he said. “It’s a very treacherous and exhausting journey.”