JUBA, Feb 14 2012 (IPS) - As Sudan and South Sudan meet for the latest round of negotiations featuring oil as a key issue this week, four ships loaded by Khartoum with southern crude are carrying their disputed cargoes to unknown buyers. 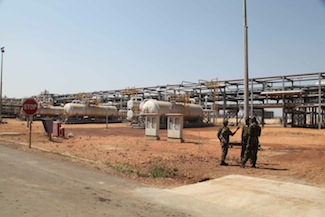 Sudan last month began loading southern crude onto ships it controlled, saying it was taking what it was owed in transport fees from South Sudan in kind. The move prompted South Sudan to shut down all oil production, which ground to a halt on Jan 28.

Economic analysts have said that the shutdown would have a huge economic impact on the new country as oil contributes to 98 percent of its revenue. The threat of possible hostilities with Sudan over oil would also impact on the country’s current high level of food security. This month the Food and Agriculture Organization of the United Nations and the World Food Programme warned that millions in South Sudan face hunger this year as the level of food insecurity has risen sharply from 3.3 million to 4.7 million.

When the south separated from Sudan it took with it about 75 percent of Sudan’s oil reserves. But the landlocked country is dependent on Sudan’s transport, processing and export infrastructure to get its crude to market.

Sudan has demanded 32 dollars a barrel, which includes charges to use facilities as well as a transit fee to cross its territory. South Sudan has offered a maximum of one dollar per barrel in transit fees, and says it is already paying the other fees to companies that own the infrastructure.

Officials from both countries are meeting this week in Addis Ababa, the Ethiopian capital, to discuss issues outstanding since South Sudan declared independence Jul. 9.

Discussions will include disputed sections of the border and the region of Abyei, as well as fees that landlocked South Sudan will pay to transport its oil through a pipeline across Sudan.

Letters from oil companies provided by the office of Pagan Amum, South Sudan’s chief negotiator, identify four ships that were loaded last month with a total of 2.6 million barrels. Letters identifying the Al Nouf and Sea Sky were given to reporters in Addis Ababa, the Ethiopian capital, on January 17. Letters naming the ETC Isis and Ratna Sharada were provided to IPS’s reporter in Juba on Feb. 10.

According to letters by the Petrodar Operating Company (PDOC), its employees were forced last month to load three ships with southern crude – the Sea Sky, the Al Nouf and the ETC Isis. In a Jan 19 letter, the Greater Nile Petroleum Operating Company (GNOPC) president Zhang Pinxian informed partners that Sudan ordered the loading of 600,000 barrels onto the Ratna Sharada by copying a letter of instruction it received from the government.

In a letter the same day, South Sudan’s Oil Minister Stephen Dhieu Dau ordered GNOPC to provide all information related to the Ratna Sharada, “including with respect to its destinations, as well as who chartered the vessel and who will be purchasing” the crude.

In a Jan. 30 letter to officials from both countries’ oil ministries, Petrodar president Liu Yingcai noted the company’s “disagreement and protest against this unilateral action”, referring to Sudan’s order to load 600,000 barrels of crude belonging to the Republic of South Sudan (RSS) onto the ETC Isis.

“This action is certainly not acceptable as the crude belongs to RSS government and prior approval from RSS is therefore needed,” Yingcai wrote.

In a Jan. 14 letter, Yingcai said Khartoum sent security forces to oversee the loading of 650,000 barrels onto the Sea Sky.

“Our PDOC staff in Marine Terminal had been threatened to be physically removed if they do not comply with the loading activities,” he wrote.

Information regarding the destinations or purchasers of the four cargoes has not yet been made officially public.

South Sudan’s oil minister has said his government has a team investigating and preparing legal cases against parties involved in transporting and trading stolen oil.

“Any company involved in shipping, trading, or buying this disputed crude needs to publicly clarify the nature of their involvement, who and how much they’ve paid, and where the oil is going,” said Dana Wilkins of Global Witness, a natural resources watchdog group.

One ship, the Al Nouf, is pictured on the website of FAL Oil, an oil trading company based in Sharjah, United Arab Emirates, in a photo gallery entitled “Our Ships”. Calls to FAL Oil were not answered.

Petrodar said in an emailed response to questions that the company has no knowledge of the destinations of the three ships it was forced to load with southern crude, or who the buyers are.

Calls to GNPOC’s headquarters in Khartoum were not answered and the company did not respond to emailed questions. South Sudan’s oil minister did not reply to emailed requests for comment.