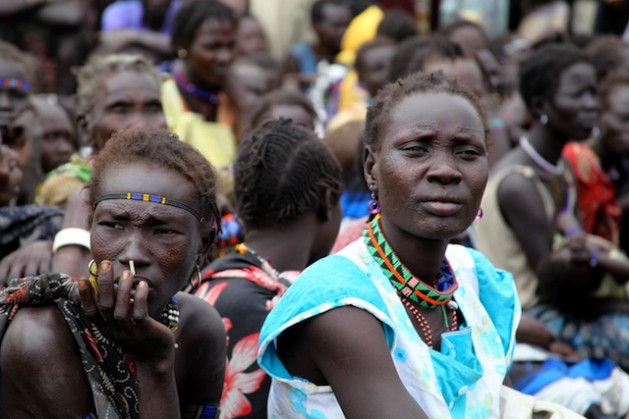 Members of the Murle ethnic group wait to receive food aid after attacks from a rival tribe that the U.N. says affected at least 120,000 people. Credit: Jared Ferrie /IPS

JUBA , Aug 25 2012 (IPS) - South Sudanese soldiers are allegedly beating and torturing civilians in the midst of a disarmament campaign in Jonglei state, and many have been unable to access justice because of a lack of prosecutors and judges, according to the United Nations and Human Rights Watch.

“Justice and accountability in Jonglei seem to have fallen by the wayside,” HRWs Africa director, Daniel Bekele, said in a statement to South Sudanese President Salva Kiir as HRW called for him to intervene.

“Authorities should investigate the cycle of violence in Jonglei, immediately put a stop to violations committed in the course of civilian disarmament, and ensure that those responsible are held accountable.”

The alleged abuses are taking place in Pibor County, which is about 273 kilometres from Juba, South Sudan’s capital. The area is the traditional homeland of the Murle, an ethnic group involved in clashes with the Lou Nuer that lasted throughout 2011 and into early 2012.

The U.N. said more than 1,000 people were killed in Jonglei in 2011. In addition, at least 900 people – mostly Murle – were killed in attacks and counterattacks from December to February, according to a report released on May 25 by the U.N. peacekeeping mission.

In the wake of the clashes, South Sudan’s government began a statewide disarmament campaign and launched a peace process aimed at reconciliation between the Murle and Lou Nuer.

But the disarmament campaign has been plagued by allegations of abuse. On Apr. 30, a coalition of civil society groups including Washington DC-based Pact and the South Sudan Law Society released a report documenting violence during to the voluntary phase of disarmament. The report warned that violence was likely to increase as disarmament moved into the enforcement phase at the beginning of May.

Elizabeth Ashamu, a research fellow with HRW, told IPS that access to justice is a problem in much of South Sudan, which is one of the world’s poorest countries and has an underdeveloped legal system. But she said special efforts should be made to ensure that civilians have access to justice in the context of a disarmament programme being carried out by the army that has a history of committing abuses against civilians.

Ashamu said there is no civilian prosecutor or judge in Pibor County where HRW focused its research. While complainants can take their case to the police, if there is no prosecutor in the county, the case will not be heard in a local court. So victims would have to travel by land to the Jonglei state capital, Bor, where there is a prosecutor. But Bor is unreachable during the current rainy season when roads are flooded.

“It’s just physically difficult for anyone to file a complaint,” she said in an interview. “There’s also fear of coming forth and filing a complaint, which is exacerbated when the abuse is committed by soldiers.”

Between Jul. 19 and 26 Human Rights Watch researchers interviewed victims and witnesses who accused soldiers of shooting at civilians and beating them. A woman said about five soldiers beat her while she had her baby strapped to her back. One man had visible scars from ropes he said were used to tie him to a tree and sticks used to beat him. Another man said he and six others were subjected to water torture.

“The majority of the victims are women, and in some cases children,” the mission said, calling on the authorities to hold perpetrators accountable while noting that the army has taken steps to investigate rape cases. The mission added that the army says it has ordered senior officers to conduct investigations and has recalled patrols allegedly involved in “criminal incidents”.

Medicines Sans Frontiers (MSF) told IPS that from mid-March to Aug. 20 it treated 90 people with violent trauma injuries in Pibor town, and surrounding villages. Of those, three died of their injuries. The organisation’s medical team also treated 16 rape survivors and eight survivors of attempted rape over the same period.

“These are just the patients that came to MSF to seek treatment, and MSF is concerned that there may be other people with trauma injuries who have not come forward to seek medical care,” said Stefano Zannini, MSF’s head of mission.

The U.N. mission, UNMISS, said on Aug. 24 there have been “significant improvements in the security situation in Jonglei state” since the clashes early this year, but incidents of abuse have spiked recently.

“UNMISS is concerned by the recent increase in serious human rights violations allegedly committed by some undisciplined elements within the South Sudanese Army (SPLA) in Pibor County.”

The mission said that between July 15 and Aug. 20 its monitoring teams recorded one killing, 27 allegations of torture or ill treatment, 12 rapes, six attempted rapes and eight abductions.

Researchers with HRW said they received credible reports of rape, and reports from local officials that more than six civilians were killed in the village of Likuangole after a soldier was killed on Aug. 16.

“Such reports likely represent a small fraction of the actual total number of incidents, as many victims do not travel to Pibor to report the crimes,” Bekele said in the letter to Kiir, referring to the county capital, which is also called Pibor.

The U.N. mission noted that the government sponsored a conference in May that brought together tribal leaders who agreed on steps to be taken to foster peace in Jonglei.

“Failure to identify those suspected of human rights abuses, carry out full investigations in all cases, and demonstrate that justice is being done for the victims, will undermine the confidence and collaboration of local communities in the disarmament process, and risks derailing the peace process,” the mission said.