PIBOR, South Sudan , Jan 23 2012 (IPS) - In the ward of a partially destroyed clinic, Mangiro (who did not give his last name) sat on a bed next to his wounded nine-year-old daughter, Ngathin. The little girl is fortunate, she survived the recent inter-ethnic clashes in Pibor county that killed her mother and sisters. 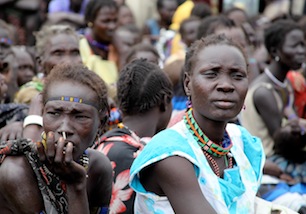 Members of the Murle ethnic group wait to receive food aid after attacks from a rival tribe that the U.N. says affected at least 120,000 people. Credit: Jared Ferrie/IPS

There are still no official figures released on how many people were killed, but the United Nations says at least 120,000 people have been affected by the violence.

Three weeks ago, at least 6,000 armed members of the Lou Nuer tribe attacked Pibor county, which is home to the Murle who have launched similar attacks. They destroyed and damaged homes and buildings, including this clinic run by Médecins Sans Frontières (MSF).

Villagers were massacred during the assault, including Mangiro’s wife and children. He said his family fled their village when it was attacked and he found Ngathin the following day.

“We found the mother and she was dead and the child was still alive and we carried her here,” he said through a translator. “They attacked us as a family. The mother and the girl’s other sisters are dead.”

He moved aside the sheet to reveal a bandaged wound on Ngathin’s leg where she was shot while fleeing members of a rival ethnic group.

The surviving members of Mangiro’s family are among the 120,000 people the U.N. says have lost their homes and their cattle, which are the key to their livelihoods.

The U.N. has launched a huge emergency operation to bring food to those people, many of whom have been living in the bush for weeks, surviving off wild fruits. The U.N.’s World Food Programme (WFP) is using helicopters to deliver food to communities that are inaccessible by road in this isolated region.

In the aftermath of the attacks, the U.N. first estimated that 60,000 people had been affected. On Friday, Lise Grande, the U.N.’s humanitarian coordinator for South Sudan, told reporters in Juba that the estimated number of people in need of aid had doubled and may rise even higher. The U.N. has a contingency plan for 180,000 people, she said.

The number of people killed remains a mystery. Immediately after the attacks, the county commissioner estimated 3,000 dead, but the government quickly dismissed that figure. James Chacha, the Pibor county medical officer, told reporters that about 2,000 were killed.

Despite repeated requests from journalists, neither the government nor the U.N. has released figures of bodies counted so far by their investigators.

“We have also been doing recces (reconnaissance flights) over the areas to look at the numbers of tukuls (homes) burnt and so on but there is no credibility in the total figure here that would lead to a number that can give an indication,” Hilde Johnson, the U.N. Secretary General’s representative to South Sudan, told reporters Thursday. “It is far too early.”

The number of wounded is also unknown, according to MSF.

“We are very worried about the medical needs of the people who are still in the bush,” said spokesman Karel Janssens. “We hear from patients and our staff that there are still many wounded in the bush, but as long as we don’t see their direct medical needs it is difficult to answer to that.”

Judith McCallum, a former South Sudan country director of a non-governmental organisation who is writing her PhD thesis on the Murle, said the longer the investigation takes, the less likely the truth will ever be known. Wild animals have already eaten many bodies, she said in an interview.

Whatever the figure of the dead, it will add to the already 1,100 people the U.N. says were killed over the past year in fighting between the Murle and Lou Nuer. After an August attack killed about 600 Lou Nuer, the Sudan Council of Churches launched a peace initiative that was meant to bring tribal leaders together in December to sign a peace agreement.

But the process broke down and by mid-December U.N. aerial patrols reported that at least 6,000 Lou Nuer youth were marching towards Pibor.

Representatives of the armed movement called it the White Army, in reference to the ash the fighters rub onto their bodies. The group issued statements publicising its planned attack on Pibor and vowing to “wipe out the entire Murle tribe on the face of the earth.”

Johnson warned that such rhetoric is “in violation of both international law and South Sudan’s domestic laws.”

“We have been informed that repetitive hate language continues to be used, calling for ethnic violence and inciting communities to take aggressive actions,” she said.

The government has promised to investigate and hold accountable those responsible for inciting the violence. In the wake of the attacks it dispatched 3,000 security personnel to the conflict area and plans to use troops as a “buffer zone” between the tribes.

Johnson said the U.N. has deployed about half of its 2,100 combat-ready peacekeepers to Jonglei state, which is home to both the ethnic groups.

But security forces have so far been unable to prevent small-scale counter-attacks by Murle youth. On Jan. 16 at least 47 people were killed in an attack on Duk Padiet county, according to Philip Thon Leek Deng, a member of parliament from the area.

Standing in front of thousands of people who gathered in Pibor to receive food aid, WFP Country Director Chris Nikoi appealed for funding to sustain the operation.

“These people have lost everything,” he said. “The international community needs to step in and provide humanitarian organisations the resources we need to help people.”