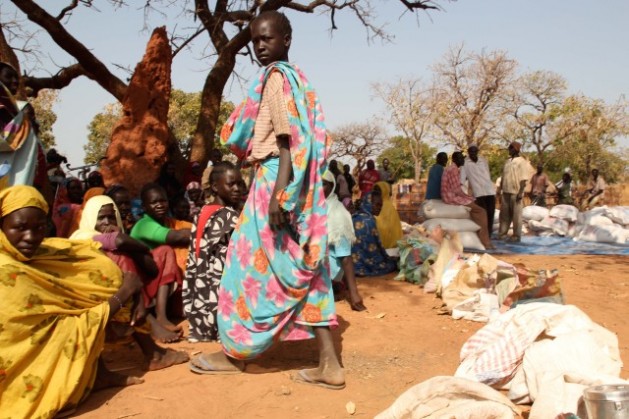 The refugee camp of Yida in South Sudan is home to over 20,000 people who have fled the violence in Sudan’s South Kordofan state. Credit: Jared Ferrie/IPS

YIDA, South Sudan, Dec 13 2011 (IPS) - In the sprawling settlement of Yida, just south of the Sudan border, more than 20,000 people have gathered after fleeing battles in the country’s Southern Kordofan state. But they now find themselves caught up in a new conflict, as recent clashes along the frontier have some warning of the possibility of war.

Fighting flared up last week in Jaw, a disputed area on the border of Sudan’s Southern Kordofan and South Sudan’s Unity state, which both countries claim, and which is about 20 kilometres from the Yida refugee camp, in Unity state.

While the United Nations fears that the fighting could spread to Yida and is attempting to relocate people from the camp, refugees here are reluctant to move.

The SPLM-N, who are fighting in Sudan’s Blue Nile and Southern Kordofan states, were formerly two divisions of the rebel army that waged a two-decade civil war, which led to the south’s secession. South Sudan says it cut ties with the group after it declared independence Jul. 9, but Sudan accuses the new country of continuing to back the insurgents.

Both countries filed complaints to the United Nations Security Council, accusing the other of violating their sovereignty. On Dec. 8, Hervé Ladsous, Under-Secretary-General for Peacekeeping Operations told the Security Council that clashes in Jaw and other disputed border areas could plunge Sudan and its recently independent southern neighbour into all out war.

Refugees in Yida were directly affected as humanitarian groups evacuated on Dec. 4, and airlifts of food ceased for almost a week. On Saturday, the humanitarian agency Samaritan’s Purse flew in the last of its food stocks from Bentiu, the capital of Unity state in South Sudan.

By that time an 85-year-old woman had died after not eating for four days, and the camp had about 500 malnourished children, according to the camp health administrator, Joseph Konda.

One of those children, one-year-old Hamuda, sat on his mothers lap in a nutrition centre with a feeding tube inserted into one of his nostrils. His skin hung loosely on his neck and arms, as his malnourished body had consumed his baby fat.

Hamuda’s mother, Toona Josephina, told IPS she walked four days to Yida along with the rest of the members of her village who fled South Kordofan after their home was attacked by Sudan Armed Forces. She said Antonov aircraft dropped bombs before ground troops arrived and occupied the village.

“As we were coming, we were bombed again when we almost reached Jaw,” she added.

The U.N. Refugee Agency (UNHCR) wants Josephina and the rest of the refugees to move to three proposed sites 80 to 100 kilometres further south. The agency has withheld the names of the new camps fearing if they are made public rebels will plant landmines on the sites.

“We fear that the fighting could spread to Yida, which was hit by air strikes in November,” it said in a Dec. 9 statement referring to the Nov. 10 bombing, which the U.N. and the White House blamed on Sudan “UNHCR is speeding up efforts to relocate the refugees away from the volatile border, to new sites that can offer more safety and assistance further inside South Sudan,” the agency said.

The refugees, however, are reluctant to leave Yida and move further south and farther from their homes. Hussaine Al Gumbullah, the camp’s chairman, told IPS one site UNHCR is proposing is large enough to fit only 9,000 people, less than half Yida’s population, and it contains no basic infrastructure. The other site is in a low-lying area that floods during the rainy season and where there are pro-Sudan militia groups active.

Yida, by contrast, has since arrivals began in June grown into an orderly community complete with sheesha and teashops constructed from thick grass and sticks in a lively market area. The site also has cement buildings including a clinic and food distribution centre.

Al Gumbullah added that the alternative sites had security issues including landmines.

UNHCR says the sites are safer than Yida and it hopes to convince the refugees to move.

“To ensure safe passage, the U.N. Mine Action Centre is doing mine surveys and clearance,” the agency said. “We hope to relocate a first group of willing refugees very soon.”

From the perspective of UNHCR, Yida is becoming less of a viable location as fighting along the border becomes more frequent. As the agency pointed out: “Escalating insecurity has also affected humanitarian access and the flow of aid, causing assistance at Yida to be disrupted repeatedly.”

The stalemate between UNHCR and the refugee population shows no sign of going away. And the camp’s population just keeps growing as between 60 and 110 more people arrive every day.

Yida is only one of the fronts where UNHCR is dealing with an influx of refugees. In Upper Nile state in South Sudan, refugees have been flooding over the border at a rate of about 650 a day to escape fighting in Sudan’s Blue Nile state. Most of those are arriving in Doro, a camp housing about 20,000 people.

“A group of 10,000 refugees were recently identified near Elfoj in Maban county of South Sudan’s Upper Nile state,” said UNHCR. “Thousands more are believed to be stranded in remote locations along the border.”

UNHCR says almost 33,000 people have fled to Ethiopia from Blue Nile, while South Sudan has absorbed more than 50,000 refugees since fighting began in June in Southern Kordofan. The number is likely to rise dramatically as fighting continues in both states.