JUBA, May 4 2012 (IPS) - Civil society groups are calling on the United Nations peacekeeping mission to withdraw support from a disarmament programme they say could spark further violence in South Sudan’s volatile Jonglei state. 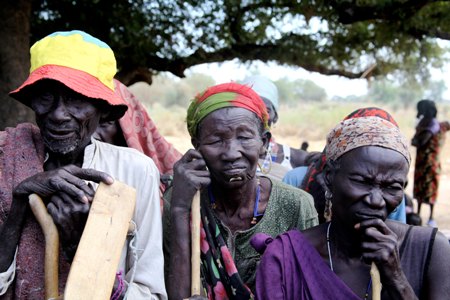 Jonglei has long been plagued by ethnic tensions and cattle raids made exceptionally deadly because of the easy availability of arms left over from a two-decade civil war that ended in 2005. With an aim to quell violence, the government on Mar. 12 launched a disarmament campaign – first by asking civilians to turn over weapons voluntarily, and as of May 1, enforcing the order.

Now, a coalition of civil society groups has released a report documenting alleged abuses during the voluntary phase of the campaign, which it says received logistical support from the U.N. Mission in South Sudan (UNMISS). The groups warn that violence could escalate now that the government has moved into the enforcement phase.

Incidents documented in the Apr. 30 report, titled Perpetuating Cycles of Violence, include: tying young men to trees and beating them, simulated drowning, and an armed clashbetween the Sudan People’s Liberation Army (SPLA) and members of the ethnic Lou Nuer community who resisted disarmament. That clash resulted in both civilian and SPLA casualties.

“UNMISS is providing material support for a violent, abusive process that weakens support for the state and continues the cycle of violence in Jonglei,” said the report, which was released bythe civil society groups Pact, Community Empowerment for Progress, Standard Action Liaison Focus, Serving and Learning Together and the South Sudan Law Society.

UNMISS denied giving “direct support” to the campaign, which has been carried out by the SPLA. The mission’s assistance has beenlimited to transporting officials throughout the state “to sensitise the population about civilian disarmament process,” Josephine Guerrero, a spokeswoman for the mission, told IPS May 1.

“As UNMISS has not provided any civilian or military contributions to the process, there is also nothing to ‘withdraw’,” she added.

But one of the report’s authors, who declined to be named due to the sensitivity of the issue, argued that transporting government officials by helicopter constitutes support for the campaign. The author added that UNMISS endorsed the voluntary campaign in a Mar. 12 press release.

South Sudan’s government spokesman, BarnabaMarial Benjamin, denied that abuses have taken place. “There is no violence up to now,” he told IPS in Juba on May 1. “There’s no resistance anywhere. You may get a few people hiding guns somewhere, but it is going well.”

Medecins Sans Frontiers provided IPS with the number of patients it treated for injuries related to the disarmament campaign. The organisation said it has treated 30 people so far, two of whom died due to their injuries. While most sustained injuries from beatings, at least three had gunshot wounds.

The South Sudanese government launched its disarmament campaign in the wake of attacks on ethnic Murlecommunities by members of the Lou Nuer ethnic group. The assault followed a year of clashes between the groups that killed at least 1,000 peoplefrom both sides, according to the U.N.

In the weeks running up to the attacks,UNMISS air patrols reported that as many as 8,000 Lou Nuer youth were marching toward Murle communities in Pibor county, which is about 273 kilometers from Juba. Despite advanced warning, the government said it was unable to deploy enough troops to stave off the assault. Government officials blamed logistical problems. Much of Jonglei, a state roughly the size of England, is inaccessible by road. And many of the existing roads become impassable when it rains.

The U.N. said the violence affected 160,000 people, many of whom are still displaced and reliant on food aid. The Pibor county commissioner claimed about 3,000 people were killed during attacks against the Murle in Pibor county. Both the government and the U.N. dismissed that figure, but have failed to provide their own estimate despite repeated requests from journalists.

UNMISS investigated the violence,andHilde Johnson, the U.N. secretary general’s special representative for South Sudan, told reporters on Mar. 6 that the UNMISS report would be made public within weeks. But two months after her statement, and four months after the attacks, UNMISS has yet to release its findings.

“UNMISS is finalising a comprehensive report on the violence in Jonglei, which will be shared with the government once it is completed,” said Guerrero, the mission’s spokeswoman. “It will of course be available to the public.”

The Perpetuating Cycles of Violence report notes that disarmament programmes have been carried out in Jonglei at least five times in the past six years without success.

Not only have such campaigns failed to rid the state of weapons, but they have been marked by beatings, torture and the killing of civilians, according to previous reports. During a 2006 campaign that collected 3,000 weapons, for example, the Geneva-based Small Arms Survey calculated one death for every two weapons seized.

The authors of Perpetuating Cycles of Violence argue that the proper conditions must be in place before civilians will feel secure enough to hand over their weapons voluntarily. These include strengthening the policing and justice systems, addressing political grievances, promoting peace and reconciliation between ethnic groups, and providing basic services such as education and health care.

Until those conditions are met, both the government and UNMISS should halt the current campaign, which is likely to result in increased violence as it moves into its enforcement phase, the report said. “Far from being an answer to insecurity in Jonglei, disarmament is a part of the cycle of violence that has plagued the state.”