JUBA, Dec 6 2011 (IPS) - Joyous reunions accompanied the latest batch of South Sudanese returning from Sudan to their newly independent homeland. But the returnees will face huge challenges integrating into South Sudan, which became the world’s newest nation on Jul. 9, but also one of the poorest. 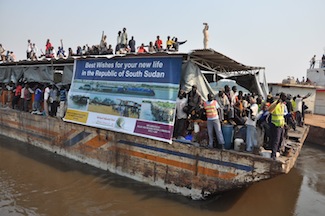 Cheers, ululations and cries of "hallelujah" arose from the banks of the Nile and from the decks of the barges as people returned to South Sudan. Credit: Hannah McNeish/IPS

South Sudan’s government has struggling to accommodate more than 350,000 people who have returned since October 2010 – and with another million southerners still in the north, that pressure is likely to increase.

Relatives gathered at Juba Port on Nov. 28 to wait for the arrival of two barges filled with more 3,200 returnees. Cheers, ululations and cries of “hallelujah” arose from the banks of the Nile and from the decks of the barges as they approached the port after 12 days on the river.

As the returnees disembarked they were met with warm embraces from family members. “That is a very joyous moment,” said Daniel Simon after greeting his mother who he said he had not seen for years. He had left Sudan years ago to return to Juba.

Saloma Majok, Simon’s mother, said she was “very, very happy” to see her son again. She said she had been living Khartoum for the past 24 years, adding that she was also happy to be in her own country even though she knew her family would have a hard time rebuilding their lives. “Even in this situation I am very proud,” she said.

Duer Tut Duer Makuac, chair of the South Sudan Relief and Rehabilitation Commission, said the organisation would coordinate with governors and county commissioners in the home areas of returnees to organise land distribution. But he said the process has not always gone smoothly, and some have been left landless.

Iklas Monu Ahmed said she had been camping next to the port in a shelter constructed from sheets and plastic since she returned four months ago, because she has nowhere else to go.

She sat on a bed frame under a tree with her three-year-old son lying next to her, sick with malaria. Ahmed said she had no money to buy medication for the boy.

She said she expected more from life in South Sudan.

“There are many changes, but for me to join the changes in this new nation I need to first get a piece of land and settle my family,” she said, adding that no one from the government or international agencies had visited her since she arrived.

The government will likely face even more pressure to address the needs of people like Ahmed in the coming months. Jan De Wilde, head of mission for the United Nations’ International Organisation for Migration (IOM), said there are about one million southerners facing an uncertain future in the north.

De Wilde explained that the Khartoum government has set a date of Apr. 9, 2012, to clarify their residential status, but the government has not yet provided any options, such as permanent residency or citizenship. “Before that date they have to either get legal or get out basically, and there are no provisions made yet for people getting legal in the north,” he said.

De Wilde said IOM has assisted almost 20,000 returnees so far, and another 9,000 are expected to arrive by barge in the coming weeks from Kosti, a staging point along the Nile just north of the border.

While the latest batch of returnees were allowed to load their belongings on eight more barges that were due to arrive within days, De Wilde said transporting such huge amounts of cargo has been slowing down the process. He said IOM could only allow future returnees to bring their basic belongings.

Omer Salah Kajam, deputy general manager of Logistics Sudanese Co., which owns the barges, said those awaiting transport in Kosti have complained strongly about the new regulations. But he said the new regulations would allow officials to transport more people quickly.

In October, Refugees International, a non-governmental organisation, highlighted the plight of those stranded in Kosti, and Renk, which are neighbouring towns on opposite sides of the Sudan/South Sudan border. The organisation said they were trapped without adequate food or shelter, and called on the government and humanitarian agencies to do more to bring them home.

Amidst the crowd of returnees and family members, Makuac said the government would work with international agencies to organise airlifts for those remaining in way stations.

“It will be cheaper in terms resources, in terms of security and in terms of time,” he said. But he added that the government would ask that each family of five bring only 20 kilogrammes worth of personal belongings.

The request will not likely be welcomed by future returnees, especially as those coming before them have been allowed to bring all manner of items.

Kajam said he has seen people load onto barges cargo including donkeys, doorframes and sound systems. But he said he did not blame them, considering that southerners are returning to one of the poorest countries in the world. “They are moving to nothing,” he said. “If I was in their place I would take everything, because I don’t know what I am going to.”