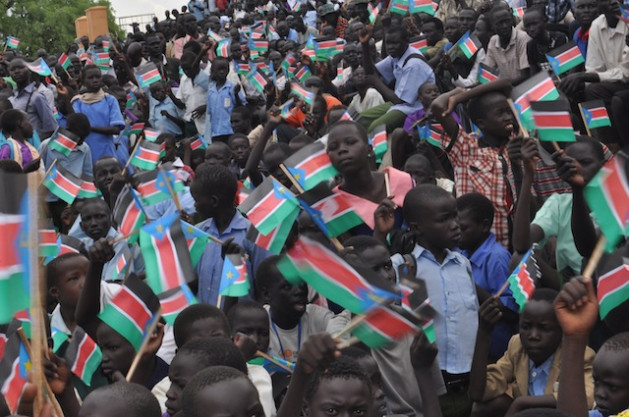 There are growing concerns that South Sudan, the world’s newest nation, is replicating some of the oppressive characteristics of Sudan’s regime. But freedom fighters say it was not what they fought for. Pictured here children celebrate South Sudan’s second birthday in July 2013 in Juba. Credit: Charlton Doki/IPS

JUBA , Jun 27 2013 (IPS) - Since age 18, Zechariah Manyok Biar fought in the revolutionary army that won South Sudan’s independence from Sudan in July 2011. But now the 28-year-old is in exile from the country he helped liberate.

The former civil servant from the South Sudanese Ministry of Roads and Bridges wrote opinion pieces critical of the government that were published on the Paris-based Sudan Tribune’s website. Biar was forced to flee South Sudan in December 2012 after receiving information that members of the country’s security forces were planning to kill him.

“If there is no freedom of speech, there is no freedom, and we were fighting for freedom,” Biar told IPS by telephone from an undisclosed location. “What is disturbing to me is that we are even worse than the government in Khartoum.”

Biar said he met with agents from the National Security Service as well as the police and asked for protection. But he finally decided to leave the country after a lack of progress in the investigation into the threats against him.

Biar believes that this inaction proves that the culprits are connected to people close to President Salva Kiir. He added that he thinks an “influential” but “small group” inside the government is carrying out attacks on critics, against Kiir’s wishes. He said they are acting in their own self interest in maintaining their positions by ensuring that Kiir is not replaced due to popular discontent.

There are growing concerns that South Sudan, the world’s newest nation, is replicating some of the oppressive characteristics of Sudan’s regime amid reports of harassment and attacks against journalists, government critics and aid workers.

“UNMISS is deeply disturbed by reports of threats, intimidation, harassment and attacks against journalists, civil society and human-rights activists,” Hilde Johnson, head of the U.N. Mission in South Sudan (UNMISS), told reporters in the capital, Juba, in February.

Johnson called for “accountability for human rights violations committed by the security forces.” She said the government should release the results of a promised investigation into the Dec. 4, 2012 massacre of 13 civilians in Jonglei state allegedly by government soldiers. She also urged the government to prosecute those responsible for the Dec. 5, 2012 murder of journalist Isaiah Abraham, an outspoken critic of the government.

Government spokesman Barnaba Marial Benjamin told reporters in Juba that authorities were investigating Abraham’s killing. But he denied that last year’s massacre of civilians in Jonglei ever took place, and said journalists, aid workers and activists were free to do their work in South Sudan.

“I believe our human rights record is going well, we are very transparent about it,” Benjamin insisted.

However, two UNMISS human rights officers were detained in January while investigating threats against journalists.

“It is imperative that our mandate and diplomatic immunities are respected fully,” Ariane Quentier, a spokesperson for the mission, told IPS. “The government has assured UNMISS that they will fully respect the human rights mandate of the mission and enable its work.”

In a February report, the U.N. Office for the Coordination of Humanitarian Affairs (OCHA) noted attacks or incidents on aid workers accessing insecure areas rose by 48 percent in 2012 from the previous year. Incidents include the beating of 61 staff members, the arbitrary arrests of 78 aid workers, and the seizure of 97 vehicles. Eighty- five percent of the incidents were carried out by “state actors”, according to OCHA.

But Benjamin claimed the government has not been made aware of these cases. “I don’t think that is happening in the Republic of South Sudan,” he said.

Chase Hannon, who worked from 2010 to 2012 as a security advisor to a group of 150 non-governmental organisations in South Sudan, told IPS that the true number of incidents is probably far higher as NGOs often do not report them, as they fear a backlash.

Hannon said physical attacks by security forces are commonplace and often involve weapons. They included the beating of the country director of “a large international NGO” with the butt end of an AK-47. Two country directors and one deputy director left South Sudan in 2012 due to concerns about their personal safety, he said.

He responded “dozens of times during the past two years” to NGO staff being detained, he added.

“Nearly all of South Sudan’s security forces were responsible for these incidents at one time or another,” Hannon said, citing the police, army, National Security Service, and the presidential and vice-presidential security details among others.

“The large number of units responsible for law enforcement – often with unclear but overlapping mandates – made dealing with these incidents much more difficult.”

Insecurity in South Sudan has created a risky environment for investors, according to Steven Wondu, the country’s auditor general. He told IPS the government “lacks the ability to protect lives and property”, and businessmen face the risk of being “beaten up,” while there is impunity for perpetrators of violence.

But Wondu said problems such as poor governance and a lack of rule of law were to be expected in a country that recently emerged from a 22-year-long civil war. South Sudan is currently one of the poorest countries in the world, and has a largely illiterate population and limited infrastructure.

“We are going to have a very high rate of political risk for a very long time,” he said in an interview in Juba.

Wondu said he expected the security and economic situation to improve slowly as South Sudan demobilised many of its security forces, based on a recommendation he made to the government.

“The security sector in general draws a disproportionately large portion of the budget leaving very little for development efforts,” he said. “Everybody knows that something has to be done about the structure of the security services.”

Wondu said the bloated security sector is partly the result of a policy of incorporating anti-government militias that were left in South Sudan following the civil war in which Sudan armed proxy forces. He said the strategy was necessary to “buy peace” but added that it “makes command and control very difficult.”

“Are we actually getting security or are we getting more insecurity?” he asked.