LISBON, Jan 11 2012 (IPS) - The death of the president of Guinea-Bissau, Malam Bacai Sanhá, could usher in a replay of the military uprisings that have set an unmistakable seal of instability on the political life of this small West African country. 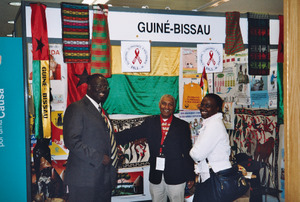 Activists from Guinea-Bissau at an event in Lisbon to raise awareness about the situation in the country. Credit: Mario Queiroz/IPS

Sanhá, who died Monday Jan. 9 in Paris, was one of the few surviving heroes of the liberation struggle against the Portuguese colonial army. That enabled him to play a mediating role in the frequent disputes for power in Guinea-Bissau, which gained independence in 1974.

From his sickbed in the Val de Grâce military hospital in Paris, where he was admitted Nov. 24, 2011, Sanhá exerted his influence through a taped declaration; the rebels were imprisoned and the attempted coup was aborted.

The general view of analysts in Portugal is that the demise of the late head of state brings to the forefront, once again, concerns about the stability of Guinea-Bissau.

The stability of the country is repeatedly jeopardised by military officers who are former guerrilla fighters for the African Party for the Independence of Guinea and Cape Verde (PAIGC), and who 22 years after the birth of multiparty democracy still refuse to accept its rules.

The rule of law has been even less observed over the last decade, during which Guinea-Bissau has become, in practice, Africa’s first narco-state, according to experts.

South American drug traffickers have set up operational headquarters and safe houses in its territory, the analysts say, as a way-stage for shipments of cocaine in transit to countries of the European Union.

They say members of the military, judges, police and politicians are in collusion with the traffickers and have allowed the sparsely guarded coasts in this country of 36,125 square kilometres and 1.5 million people to become the main stopover for cocaine between its point of origin in the Andean region of South America and its destination in Portugal and Spain, whose coasts constitute the EU’s southwestern border.

For the South American drug lords, Guinea-Bissau is a paradise. Most of them, the experts say, are Colombians who quickly learn Portuguese, because of its similarity to Spanish, and Brazilians, who feel at home in this country with which they share a language.

Another factor favouring the impunity enjoyed by organised crime is the violence that has always prevailed in this tiny country between Senegal and Guinea, which the World Bank ranks among the 10 nations with the worst quality of life, alongside Chad, Ethiopia, Rwanda, Niger, Madagascar, Bangladesh, Burundi, Laos and Pakistan.

Against this backdrop, Sanhá, elected in 2009 as president for a five-year term, was viewed as a kind of “moral reserve” of the nation.

In his youth, Sanhá took up arms as a volunteer in the war of independence against Portugal, under the command of Amílcar Cabral, the founder of the PAIGC, who was regarded as the father of the nation.

He fought the Portuguese army in a bloody war that ended with Guinea-Bissau’s unilateral declaration of independence in 1973, recognised by Lisbon a year later after the “carnation revolution” in which army captains overthrew the dictatorship that had ruled Portugal since 1926.

Fernando Ka, the president of the Guinean Association for Social Solidarity (AGSS), which provides support for Guinean migrant communities abroad, told IPS that the chronic violence that characterises Guinea-Bissau could reemerge now, not only because of the struggle for power, “but as a result of the immense corruption of the political class, which is becoming richer and richer.”

According to Ka, a lawyer and activist with dual Guinean and Portuguese nationality, “as long as the country lacks a real development policy that generates wealth for a population impoverished to unimaginable extremes, we cannot be surprised at the proliferation of international mafias with local partners and the consequent prolongation of a seemingly endless violence.”

In fact Guinea-Bissau has a long record of violence, coups, failed uprisings and instability in the armed services dating from 1980 when the army, commanded by João Bernardo Vieira, the legendary “Comandante Nino” of the independence war, overthrew then president Luis Cabral.

Between 1983 and 1993 the government was prey to several conspiracies and in 1986 the vice president, Paulo Correia, and five other people in high places, were executed for treason.

In 1998 the country plunged into civil war and a military junta, headed by Brigadier General Ansumane Mané, deposed President Nino Vieira, who fled to Portugal.

Mané declined to take power, and called elections. In May 1999, an electoral victory propelled President Kumba Ialá into office.

But the peace did not last. By order of Ialá, Mané was gunned down for alleged rebellion, and in September 2003 there was another coup d’état, led this time by General Verissimo Correia Seabra.

Correia Seabra was killed the following year during a mutiny of soldiers protesting about back pay owed them for serving on African Union peace missions.

Nino Vieira returned from Portugal in 2005, won the elections and took office as president. But he was assassinated Mar. 2, 2009 – the day after the chief of the armed forces joint staff, Tagma Na Waie, a longtime rival of Vieira’s, was killed by a bomb.

Another coup attempt took place Apr. 1, 2011, this time against Prime Minister Carlos Gomes Junior, who was detained by the rebels but later released, after strong pressure from Sanhá and threats by international donors to cut off aid to the country.

The influential Lisbon daily Público devoted its Tuesday Jan. 10 editorial to Sanhá’s death, under the title “Waning Hope in Bissau”.

“There are justifiable fears that the death of Malam Bacai Sanhá will exacerbate instability in the country, because the truth is that Guinea-Bissau has still not battled firmly against the seeds of violence, personified in the army, which has never accepted civilian control,” the editorial stated.

It went on to deplore “the latent coup mentality, together with the lack of structures that could give the country a minimum basis for progress, that are stifling Bissau with nightmarish power, and the death of Malam Bacai Sanhá only helps to thicken the nightmare like a heavy shadow.”

The late president’s political action was focused on getting his country off the list of so-called “failed states”, a struggle that he took up with all his energy since he was sworn into office, in spite of his already precarious state of health.

But his time ran out. The last major battle of the former PAIGC guerrilla was against illness. He was finally defeated Jan. 9, at the age of 64, by diabetes and heart failure.