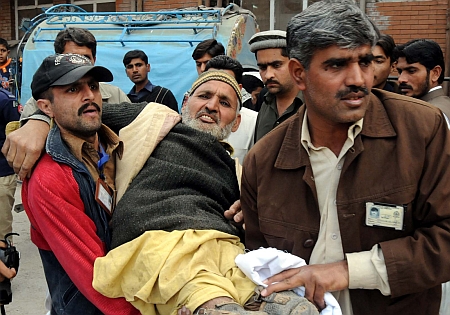 The war against terrorism has left many Pakistanis disabled. Credit: Ashfaq Yusufzai/IPS

PESHAWAR, Pakistan, Jan 28 2012 (IPS) - The prolonged United States-led war against terrorism has left a large number of people disabled in Pakistan, compelling the government to institute a rehabilitation plan that will include imparting vocational skills.

The plan, to be put into action in March this year, will start with the compilation of data on people injured in the war in the Federally Administered Tribal Areas (FATA) and the Khyber Pakhtunkhwa (KP) province, says Mahboob ur Rehman, head of the physiotherapy department at the Hayatabad Medical Complex (HMC)in Peshawar.

“We plan to enhance the physical rehabilitation services for the victims of terrorism to save them from permanent disability,” he told IPS.

The decade-long armed conflict has resulted in injuries to thousands of people from blasts, shelling and drone attacks, with the majority of the victims needing prosthetic and orthotic management to help regain the ability to walk, he said.

Citing statistics gleaned from government-owned hospitals, Rehman said that some 35,000 people have died in the war while another 60,000 have received serious injuries. An estimated 10,000 persons will need rehabilitation services, he said.

Mohammad Haris, an orthopaedic surgeon at the Lady Reading Hospital, Peshawar, says the war-injured include women, children and elderly people who have lost limbs and are immobile.

“They require wheelchairs, crutches and other support. The majority are poor and cannot afford the costly rehabilitation services offered by private institutes,” Haris said adding that many of the disabled were unaware of treatment facilities available at government hospitals and orthotic workshops.

Irfanullah, 22, who lost both his legs in a mortar shell attack in North Waziristan Agency in October last year, eagerly awaits the new programme.

“I need artificial limbs so I can walk and cope with running a fruit shop,” Irfanulah said. “My father, who received critical injuries only a month ago and had his left leg amputated also needs an artificial limb,” he said.

Shagufta Bibi, 38, from Swat says she would have been bedridden had it not been for the artificial leg provided to her. “I was sitting on the lawn of my house when the Taliban threw a hand grenade that seriously injured my right leg,” the mother of three children told IPS.

The Taliban fled over the border into Pakistan’s tribal areas after its government in Afghanistan was toppled by U.S.- led NATO forces in 2001. But once they had settled down they began attacking Pakistani forces, market places and government buildings in a bid to enforce their fundamentalist ideology.

The new plan, worth 1.2 million dollars, will cover the cost of artificial limbs, wheel chairs, and sewing machines. Accessories worth two million dollars have been pledged by the Japanese government to be provided free to the beneficiaries.

“We have decided to appoint physiotherapists and orthotic specialists at the district hospitals in KP and in the FATA. The rehabilitation process starts right from surgical intervention, medical and physical rehabilitation to providing vocational skills and support for self-employment,” an official said.

Public-sector hospitals already have physiotherapy facilities but physical rehabilitation and paraplegic and hemiplegic management are possible only with the support of private-sector organisations that specialise in helping disabled people.

The government will allocate funds for wheelchairs, walking aids and the manufacture of support devices. Departments dealing with health, social welfare and women’s department as well as religious charities are expected to pitch in.

Officials said that the need for a programme to help the disabled was first felt after the 2005 earthquake which left thousands of people with serious disabilities. The plan is to have physiotherapists attached to surgical, orthopaedic, neurosurgery and other wards at tertiary care hospitals.

A 20-bed rehabilitation facility is to be set up at the HMC to take care of victims of paralysis. At the moment there is no indoor rehabilitation unit at any public-sector health unit, although there is a limited paraplegic centre.

Officials said that the privately run, 15-bed Habib Physiotherapy Complex, which has facilities for stroke management, was likely to sign an agreement with the government for coordination among public and private organisations.

Thousands of polio-affected children could also benefit from the programme once it is launched, officials said.