MBABANE, Jan 17 2012 (IPS) - The 146-kilometre railway line to be established between South Africa and Swaziland will help reduce the cost of doing business between the two countries. 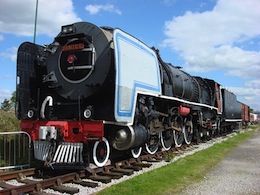 Soon a railway line will link South Africa and Swaziland and add a much-needed boost to the economies of these two countries. Credit: Oxyman/Wikicommons

Swazi traders, who import most of their wares from South Africa, feel the new railway infrastructure will also have positive spinoffs for the consumer by lowering the prices of commodities because of the potential reduction of transport costs.

“Trains are not widely used in the country because the capacity of the rail industry is limited and hence confined to few of the big companies,” said Sibusiso Sibandze, an entrepreneur.

The railway will run from Lothair in Mpumalanga, South Africa to Sidvokodvo, Swaziland.

Announcing this project in Johannesburg on Jan. 12, South Africa’s Minister of Public Enterprises Malusi Gigaba said his country would pay 1.5 billion of the two billion dollars the railway will cost, while Swaziland will pay for the remainder. Construction will start next year and end in 2016.

“Transport is one of the reasons why the cost of doing business in this country is a bit high,” said vice- chairperson of the Federation of the Swaziland Business Community, Hezekiel Mabuza.

Swaziland imports more than 80 percent of its goods from South Africa, which in turn imports about 70 percent of Swaziland’s exports, which include coal, sugar, beef and citrus fruits. However, the new railway line will predominantly transport coal.

Daily, 30 trucks travel between Swaziland and Mozambique and many citizens are concerned about the number of heavy vehicles On the roads.

“The high density of heavy traffic will deplete our roads and that’s why we’re excited about this project because we hope that Salgaocar will also seize the opportunity to use the railway,” said Mabuza.

Mabuza added that because Swaziland was landlocked, this made it even more expensive to transport goods into and out of the country.

“When transporting goods by ship we still have to spend more money getting them by road from or to either Mozambique or Durban,” said Mabuza.

Business people hailed the new railway line between South Africa and Swaziland, called the Swazilink Railway Line, as a breath of fresh air in the transport industry in the region because it will not only create jobs for many but it will also boost the economies of the two countries.

About 63 percent of Swaziland’s 1.1 million people live below the poverty line of two dollars a day. The country was hard hit by the global recession as it lost 60 percent of its revenue from the Southern African Customs Union. Foreign direct investment is very low while the economic growth rate is below two percent.

“We’re very excited that Swaziland is part of the development because this project will also increase the amount of goods transported in the region,” said chief executive officer of the Federation of Swaziland Employers and Chamber of Commerce, Zodwa Mabuza.

“We expect industries to develop along the rail infrastructure and jobs to be created for the communities,” said Swaziland Railway chief executive officer Dr. Gideon Mahlalela. Mahlalela added that the new railway would also target ports in Maputo, Mozambique.

“We are also looking to connect with other ports in the future which might develop along the eastern coastal belt,” said Mahlalela. “Railways without port solutions are not the answer to customer logistical needs.”

Although the railway line will mainly transport coal, said Mahlalela, it will also unlock the potential for other minerals, not only between the two countries, but also in the whole region.

Financial institutions are already salivating over project and Mahlalela said money for its construction will not be a problem, as it will fund itself through the demand it will create.

Gigaba and Swazi Minister of Public Works and Transport Ntuthuko Dlamini marked the start of the project at a sod turning ceremony on Jan. 12 at Lothair. Hailed as the first large-scale investment in Southern Africa since the Richards Bay line constructed in 1976, when complete it will create an additional capacity of 15 million tonnes.

“Globally, rail infrastructure is undergoing a major renaissance as an investment and a vehicle for the upliftment of citizens in an environmentally friendly and cost effective manner,” said Brian Molefe, chief executive officer of South Africa’s rail and freight group Transnet.

He said Transnet has done a high-level risk assessment to identify the strategic planning, funding, construction and environmental risks to ensure that the infrastructure sees the light of day.

“We expect the first train to run in three years time after the necessary land purchase agreements and environmental approvals have been resolved,” said Molefe.

Gigaba said this project is strategic in the region because it has the potential to attract traffic to the Maputo and Richards Bay corridors, providing alternative export corridors critical to the southern African ports. He said it will also encourage economic and rail transport in Swaziland.

“The capacity created for general freight via this link line will relieve pressure on the Coal Line,” said Gigaba.

He said Africa’s competitiveness in the global economy demands that countries take measures, both individually and collectively, to modernise the continent’s infrastructure systems.

Dlamini said this project would reduce poverty significantly because the railway line will run through the marginalised areas of Emerlo in South Africa and Sidvokodvo in Swaziland.