AMECAMECA DE JUÁREZ, Mexico, Feb 20 2012 (IPS) - It’s always cold in this city in Mexico’s Sierra Nevada mountains, more than 2,400 metres above sea level, at the foot of the Popocatépetl volcano.

This city, located 55 km from the Mexican capital on the border between three states of central Mexico – Morelos, Puebla and Mexico – is home to 30,000 people, with another 20,000 in outlying areas. 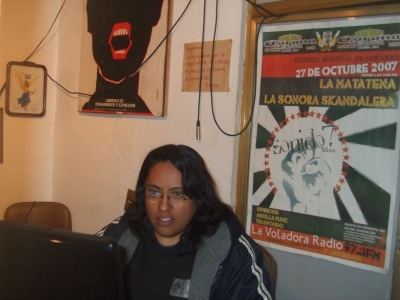 Verónica Galicia is among those in charge of La Voladora’s social network accounts. Credit: Daniela Pastrana/IPS

Ask any local resident and they will tell you about La Voladora, the radio station that won a major legal battle for freedom of expression when it challenged the government in a case in which the Supreme Court handed down a ruling in its favour in 2011.

La Voladora is one of the community radio stations with the greatest impact in Mexico, and it now has an on-line presence as well.

“A few years ago, being on the Internet was a plus, but now it has become essential because although we have great ratings, it has allowed us to expand our reach and go beyond the limits imposed by our broadcasting power,” the station’s director, Verónica Galicia, told IPS.

“We are reaching different audiences, who are not necessarily in this community,” said the 32-year-old Galicia, who has a university degree in literature and has dedicated one-third of her life to community radio.

La Voladora emerged in October 2000, along with other community stations created during the 1999 strike by National Autonomous University of Mexico (UNAM) students.

At the start, the station only broadcast on Sundays from a local kiosk, and its signal only reached listeners within a radius of a few blocks.

But in 2003, the Popocatépetl volcano became unusually active, and mistaken information that was broadcast by the country’s leading TV station caused a wave of panic in the community, which began to understand the importance of having its own local station.

La Voladora began to go on the air daily, broadcasting from the town’s cultural centre, until elections that year brought a change in the city government, and the new mayor, who belonged to the conservative governing National Action Party, dubbed the station “pro-guerrilla” because of its stance in favour of social movements, human rights and the environment.

In May 2005, after a long, complex negotiation process marred by threats, arrest warrants, and attempts to evict the station, it finally managed to secure, with support from the Mexican branch of the World Association of Community Radio Broadcasters (AMARC), a permit to operate for seven years with a 300-watt signal, at 97.3 on the FM dial.

“In theory we should reach 11 municipalities. But when they gave us the permit, the frequency was already occupied by a radio station from the state of Morelos, that has more than 31,000 watts of broadcasting power,” Galicia said.

A year later, the country was shaken by general elections dogged by accusations of fraud, and demonstrations by peasant farmers from San Salvador Atenco, a farming town near the capital, the People’s Assembly of Oaxaca (APPO) and the Zapatista National Liberation Army (EZLN), in the south of the country, triggered a new offensive against community radio stations.

La Voladora was physically attacked, and the station staff received death threats. The complaint filed with the special prosecutors office on attacks against journalists went nowhere.

“We never really got to see our complete case file,” said Galicia. “We cooperated as far as we could, we did what we had to in order to track down the people who threatened us, but the authorities did not do their part.”

Mexican law does not recognise community radio stations as part of the media. The permits reluctantly granted to around 30 such stations do not authorise any kind of advertising sales, which puts them at a disadvantage vis-à-vis private or public stations, Gisela Martínez, who forms part of AMARC Mexico’s legal team, told IPS.

In 2009, La Voladora asked the ministry of health to contract it to broadcast public health campaigns. When the ministry refused, the station took its case to the Supreme Court.

In a July 2011 ruling, the Court ordered the ministry to assign its official advertising and campaigns under fair, equal conditions, and to give the station a new response to its request.

A total of 30 volunteers work at La Voladora, which broadcasts 24/7, and each member contributes eight dollars a month to the station. They also have a system of sponsors – local individuals, businesses and institutions – and organise raffles and rock festivals to raise funds. But “it’s never enough,” Galicia said.

Lavoladora.net, launched in 2007, ended up bringing about major changes at the station, which now has podcasts, audiophile programmes that can be downloaded, on-line television programming, and a heavy presence on the social networking sites.

“The most difficult part has been to keep Voladora TV going,” said Galicia. “We are not professionals with specific training in radio; we studied other things, in the case of those of us who studied. But the people running this station are people who bake bread or are retired members of the electricians union, for example.

“We are worried,” she added. “Technology continues to advance, and we have to see how we’ll manage to keep up.”

The station holds frequent obligatory training courses on radio broadcasting, journalism and new technologies for its staff. However, despite the success found on the Internet, the main focus is still the airwaves.

La Voladora also faces other challenges. Its operating permit expires in May, and although the station applied for an extension a year ago, there is no guarantee that it will be granted, due to the lack of a transparent public procedure for the issuing of licenses.

“They shouldn’t have any reason to turn us down,” said Galicia. “We are going to wait until they notify us. But whether or not they give us the permit, the assembly has already decided to continue broadcasting.”

* This article was produced with support from UNESCO.