BUENOS AIRES, Mar 27 2012 (IPS) - The trial for the theft of babies of political prisoners during Argentina’s 1976-1983 dictatorship is nearing its end after more than three decades of work by the Grandmothers of the Plaza de Mayo, who have so far tracked down 105 of an estimated 500 missing children. 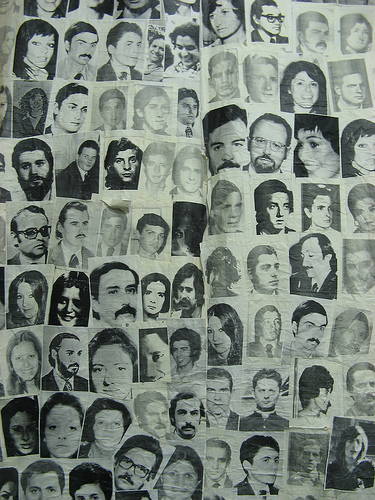 In some of the thousands of cases of forced disappearance in Argentina, babies were stolen and raised by military couples. Credit: ha+/CC BY 2.0

Closing arguments will be heard this week in the trial of nine members of the military and a doctor for the kidnapping and theft of some 30 children.

The sentence is expected to be handed down in late May, Alan Iud, a lawyer for the Grandmothers of the Plaza de Mayo, told IPS.

Since the years of the dictatorship, the Grandmothers of the Plaza de Mayo have been trying to find out what happened not only to their sons and daughters, who were “disappeared” by the regime, but to their missing grandchildren.

The stolen babies were either born to political prisoners in clandestine detention centres or kidnapped along with their parents, who were later killed or “disappeared”. The children were then given to military or police families, or in some cases, to couples who adopted them in good faith.

The defendants are charged with “taking, retaining and hiding minors and changing their identities”.

Some of the missing grandchildren are just now finding out their true identities, more than 30 years after they were kidnapped.

“I lived with them for 32 and a half years,” said Francisco Madariaga, referring to the people he considered his parents for over three decades.

He grew up as Alejandro Gallo, and believed he was the biological son of former army intelligence officer Víctor Gallo, one of the defendants in the trial.

Around the age of 16, Madariaga began to reject his “father” because he was a “very violent man. I was his war toy; when he looked at me he would see the enemy,” he told IPS.

He added that at around age 20, he began living in anxiety, plagued with doubts about his real identity.

But feelings of fear and guilt kept him from asking his “parents” about who he was. It was not until he was 32 years old that, pressed by his friends, he worked up the courage to visit the Grandmothers of the Plaza de Mayo office and take a DNA test at their National Genetic Data Bank, which confirmed his true identity.

He found out that he was born in the Campo de Mayo clandestine detention centre, where his mother Dr. Silvia Quintela, a young surgeon who was four months pregnant when she was kidnapped in January 1977, was held.

Quintela is one of the thousands of victims of forced disappearance in Argentina, who number around 30,000 according to estimates by human rights groups.

Francisco’s case was one of the few in which either of the biological parents survived. His father, Abel Madariaga, managed to flee into exile after his wife was seized.

Years later, when he returned to Argentina after the regime collapsed, he dedicated himself to the search for his son and became the only male member of the board of directors of the Grandmothers of Plaza de Mayo.

Now the young man, who has been reunited with his biological father and relatives, has high hopes for the trial. “I testified, as a plaintiff. I am anxiously waiting for the sentence. I want justice to be done, because they ruined so many lives,” he said.

Iud explained that the trial has not covered all of the cases of stolen children, but merely “a representative sample of what happened, not in just one, but in several clandestine detention centres.”

The cases presented include that of the three Ramírez children, who were two, four and five years old when their mother was kidnapped and their father was in prison.

Instead of leaving the children with other family members, their kidnappers dumped them in an orphanage, where they suffered sexual abuse, mistreatment and hunger for seven years.

Another case is that of Victoria Montenegro, who denounced the complicity between a prosecutor, Juan Romero, and the army intelligence officer who killed her parents and raised her, the late Colonel Herman Tetzlaff.

Last year Romero resigned as a prosecutor, after he was accused in court of passing information to the colonel.

The illegal appropriation of the children of political prisoners was not among the crimes covered by the two amnesty laws passed by Congress in the mid-1980s, which enabled military human rights abusers to evade prosecution.

Nor was it covered by then President Carlos Menem’s (1989-1999) 1990 pardon of members of the former military junta, several of whom had been sentenced to life in prison.

The attorneys for the Grandmothers brought legal action in 1996, taking advantage of the fact that the crime of baby theft was not specifically included in the amnesty laws and the pardon, which were not struck down until the mid-2000s. The trial finally got underway 13 months ago.

In the dock are former dictators Jorge Rafael Videla and Reynaldo Bignone; other prominent armed forces officers; and Dr. Jorge Luis Magnasco, who attended the births.

“The crime for which they are being tried is appropriation of children, but the aim of this trial is also to show that there was a systematic plan to steal children. And to hold Videla and Bignone responsible,” as heads of the military junta, Iud said.

Over the years, the plaintiffs have compiled abundant documents and testimony as proof that there were specific orders as to how to handle pregnant political prisoners, so that their children would be raised in homes “free of hatred towards the armed forces,” the lawyer said.

There is also evidence that members of the Catholic Church and staff at the U.S. Embassy in Argentina and the State Department were aware of, and helped conceal, this crime.