SANTIAGO DE CUBA, Mar 26 2012 (IPS) - In this eastern Cuban city, Danny Dip Leyva has begun to use her shower again after decades of hauling water into her house by hand. But in Aurora, a small neighbourhood on the outskirts of Havana, Manuel Roque still longs for a regular supply of piped water. 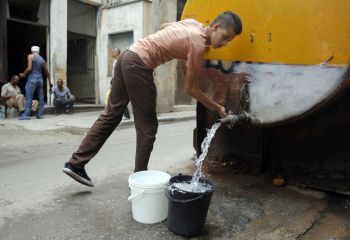 Nearly 900 km apart, Havana and Santiago de Cuba are this country’s largest and second-largest cities. Both depend mainly on rain for water, which makes supplies vulnerable to the effects of climate change. And both reflect the magnitude of the country’s water shortage and the government’s efforts to solve the problem.

Experts note that the worst natural disasters in Cuba are associated with hydrometeorological events, including drought and hurricanes, which are aggravated by climate change.

The worst drought in recent years, in 2004 and 2005, began in eastern Cuba but eventually affected the entire country, causing some three billion dollars in losses. In Cuba, the dry season runs from November to April, and 80 percent of annual precipitation occurs from May to October. As of February 2012, the country’s 240 reservoirs held nearly 5.6 million cubic metres of water, or 56.5 percent of capacity.

The long and narrow Cuban archipelago has no major natural freshwater sources, making rainfall its principal source of water. The country’s reservoirs are part of a strategy followed by the government since the 1960s, to provide supplies during the dry season.

In recent years, the Cuban government has revived plans that were interrupted by the severe economic crisis of the 1990s, hoping to find a long-term solution to water shortages with engineering works in the eastern and central regions to transfer water from rainy mountain regions to drier areas.

The strategy includes the construction of reservoirs, canals and pipelines, as well as more than 80 km of mountain tunnels. Once completed, the distribution network will benefit at least nine of the country’s 15 provinces. The programme is considered vital for the eastern region, due to its scarce groundwater reserves.

“This is adaptation on a major scale, and at a high economic cost. It is also necessary for society to accept that drought is here to stay, and that people must prepare and find solutions, such as having recipients for storing water, or if they have animals, storing forage and having places to move their livestock,” Carlos Rodríguez, a land-use planning and environmental expert, commented to IPS.

While he noted that Santiago and other parts of eastern Cuba are among the most vulnerable to drought, he said water shortages are also a problem in western provinces such as Havana and parts of Pinar del Río, 160 km from the capital.

Santiago, a city of about half a million, has six reservoirs. But its water supply was inadequate for decades, and entire generations grew up carrying water to their homes. “Piped water was available every six to 30 days,” INRH official Gerardo Linares told reporters.

The population grew and water sources became even more insufficient. Moreover, the city’s old, deteriorated water grid presented another obstacle for piping water to people’s homes. But this year, Santiago’s residents have a modern new aqueduct and water purification plant.

“Our quality of life has taken an enormous leap forward. Now we have water almost every day from our taps. In the past, water would flow every 15 or even 20 days, and taking a shower was a luxury,” Dip Leiva, who lives in Santiago’s José Martí district, built in the 1960s, told IPS.

In Havana, water distribution is uneven: in some neighbourhoods water is always available, while in others, such as Roque’s, there is running water every other day, but only in the very early morning. “Our water tanks aren’t always filled up all the way, and sometimes we end up waiting for water that never comes,” Roque told IPS.

According to official figures, 10.7 million of Cuba’s 11.2 million inhabitants have access to drinking water. Water is delivered to the homes of 8.4 million people, while 1.7 million have piped water less than 200 metres from their homes, and about 600,000 receive water from tanker trucks, known here as pipas.

“We have 2,411 human settlements, which are supplied with water through 22,326 km of piping,” equivalent to 14 times the island’s circumference, INRH official Caridad Díaz said on a television programme broadcast late last year.

However, the drought and the poor state of the water pipe system in Havana, population 2.2 million, are conspiring against stable distribution. Water authorities have acknowledged that about half the water pumped nationwide does not reach its destination, due to leaks in the pipes.

The government plan for the “updating” of the economic model includes prioritising and expanding a programme to rehabilitate the country’s water distribution networks, including the sale of fittings and accessories to the public. The plan also includes the mandatory regulation of metered consumption and rates that depend on consumption, both in the state and private sectors.