VRANJE, Serbia, Mar 15 2012 (IPS) - The region of former Yugoslavia has developed a new phenomenon in response to economic hardships that continue to linger in Europe years after the climax of the global financial crash in 2008. 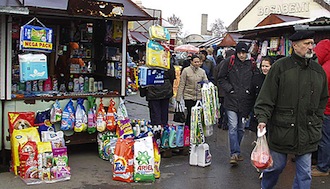 So-called “shopping tourism”, cross-border trips between Serbia, Bosnia, Croatia, Hungary, Bulgaria or Macedonia in search of cheaper goods in neighbouring countries, has emerged as a new point of unity for the Eastern European bloc.

“Once a month I go to Macedonia to fill my fridge,” Milan Jankovic (72), a pensioner from Vranje, told IPS. “The bus ticket is only 300 dinars (3.5 dollars) and for 20,000 dinars (roughly 284 dollars) I bring home two full bags of processed cheese, preserved meat, Pâté and long lasting diary products that would cost me my whole pension, 30,000 dinars (351 dollars), here,” he added.

The Macedonian town of Kumanovo, located only 50 kilometres away from Vranje, is the primary target for shoppers like Jankovic and many others.

“With current sales of winter clothes (sometimes marked down by as much as 70 percent) I think my wife and I will get at least one new coat each,” Jankovic said.

Serbs say that clothes and shoes are 30 percent cheaper in Bulgaria, while Bulgarians find Serbian food much more affordable.

“Even when I calculate the cost of petrol from Sofia (the Bulgarian capital) to Pirot, it’s cheaper to buy fresh meat or preserved meat products; everything has become so expensive in Bulgaria,” Ivan Mitev (39) told IPS.

A local butcher who declined to give his name said, “On Saturdays or Sundays we only see Bulgarians in our shops; that saves our business, as our people (Serbs) have less and less money.”

Apart from the lure of cheap food, Croats come to Serbia very often in order to buy cigarettes, which are the cheapest in the region at an average price per package of between one and 1.5 dollars. In Croatia, which is poised to join the EU next year, the price could be anything upwards of 2.6 dollars.

Vladimir Stojanovic, head of the Serbian customs office for Gradina, the biggest border crossing into Bulgaria, confirmed that shopping tourism is flourishing.

“Bulgarians buy food here, while our people buy textiles and leather products there. Also, Serbs buy LED TVs in Bulgaria for about 300 euros (390 dollars), while their regular price in Serbia is between 450 (585) to 500 euros (650 dollars),” he said.

Customs regulations for cross-border trade with all Serbian neighbours state that taxes are only paid on purchases exceeding ‘private purposes’. So most people bringing in single TVs, a few bags of food or a couple pairs of shoes are able to shop tax-free.

Furthermore, regulations in Bulgaria and Hungary – members of the European Union (EU) – allow for local value added tax (VAT) to be deducted from the price of goods if the total purchase exceeds 150 euros (195 dollars); shoppers get their money back at special exit counters on the borders.

“That’s what makes it worth it to go to Szeged,” Slobodan Kordic (52) from the Northern Serbian town of Subotica, told IPS. Szeged is the first Hungarian town across the border, only 40 kilometres away from Subotica.

“I bought my teenage son a pair of winter shoes for only 2700 dinars (31 dollars) at a sale, while at home I’d pay 10,000 dinars (117 dollars),” Kordic said, adding that this represented a huge saving on household income.

People from the Western Serbian town of Loznica found that buying spare car parts and tyres in the Bosnian town of Bijeljina is worth the effort. The prices are 20 percent lower, and the 17 percent VAT return makes the idea very attractive for many.

“Besides, filling the petrol tank in Bosnia is also much cheaper,” said Zoran Smijanovic (34) from Loznica. The price per litre of top quality Euro-premium petrol is 1.6 dollars in Bosnia while in Serbia it has been 1.95 dollars as of March 12.

“It doesn’t look like much, but saving several thousand dinars a month on petrol or much more on clothes and shoes for children means a lot,” Brkic said. “This helps people manage, particularly in the border regions of the South, which are among the poorest (parts of the country),” he added.

Serbia has the lowest average income in the region, about 390 dollars per month. The introduction of the market economy in 2000 meant an influx of foreign goods, to which the state attached high taxes in order to fill its own coffers.

A return to the visa-free travel system for the EU countries in 2009 provided many Serbs with the opportunity to go across the border and shop for less money.

Although taxes have been gradually decreasing since 2008, particularly since Serbia gained candidate status for EU membership this year, prices remain high in a nation that has grown poorer in the past years.

Since the downturn of the economy in 2008, individual purchasing power has declined to its lowest level since 2000.

“Purchasing power in Serbia declined by at least a third in 2011, with huge loss of jobs and limited family incomes,” economic analyst Misa Brkic told IPS. “Most of the prices here have remained the same, while people have less and less money to buy anything besides the (basic) necessities, such as food. That is why Serbia is so cheap for neighbours,” he added.

Average net salaries stand at 956 dollars in Croatia, 455 dollars in Bulgaria and 520 in Bosnia- Herzegovina.