Mexico, So Close to Oil, So Far from Clean Energy

MEXICO CITY, Mar 22 2012 (IPS) - Mexico is not only lagging in the development of renewable energies, but some of the projects that are being carried out actually pose a threat to the environment and biodiversity, such as a wind farm on the island of Cozumel, activists say. 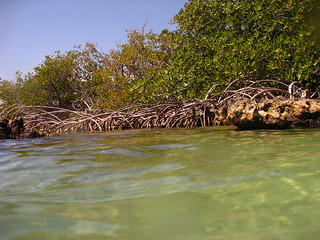 Mangroves form part of the fragile biodiverse ecosystem on Cozumel island that activists say projects like the wind farm will endanger. Credit: Clinton Little/CC BY 2.0

“I believe in renewable energies. But they should be developed in suitable places, not Cozumel, because it’s an area of mangroves, wetlands, coastal lagoons, cenotes (sinkholes) and underground rivers,” Guadalupe Álvarez, a former public official who founded the local environmental group Cielo, Tierra y Mar (Sky, Land and Sea), told IPS.

“Besides, the water table is very shallow there,” she added.

The Cozumel 1 wind farm, which involves an investment of one billion dollars and is being developed by the Mexico Power Group on the small Caribbean island of Cozumel located 1,650 km southeast of Mexico City, will generate 400 MW of energy.

The company, a spin-off of the Cannon Power Group, a San Diego-based renewable energy developer, has been granted a municipal permit although it has not presented any environmental study.

It plans to install 121 80-metre tall wind turbines on 5,800 hectares of land. Two masts that measure wind velocity and temperature are currently functioning on the site.

Cozumel, Mexico’s biggest and most populated island – 100,000 people – is located 20 km off the Yucatan Peninsula coast, in the state of Quintana Roo, which has a total of 64,000 hectares of mangroves.

Nearly 2,000 of those hectares of mangroves are in Cozumel, which has a total territory of just under 47,800 hectares.

Red, white, black and button mangroves grow in the area, which is home to many species of ducks, herons and parrots and is a nesting ground for the green sea turtle (Chelonia mydas), an endangered species.

Mexico’s National Commission for Knowledge and Use of Biodiversity (CONABIO) notes that mangroves provide a habitat for local and migratory birds, maintain water quality, retain organic matter, and cushion the impact of tropical storms and hurricanes.

CONABIO cites tourism, the modifications caused by dredging and the construction of wharfs and hotels, the filling in of wetlands, and pollution by solid waste, petroleum derivatives and sewage as threats to Cozumel’s mangroves.

Mexico, which extracts 2.5 million barrels of crude a day, is heavily dependent on oil, the source of 93 percent of the energy generated in the country. The rest comes from hydroelectric stations, nuclear plants and wind farms.

“There are many hurdles, like the subsidies for electricity, natural gas and gasoline, and Mexico only has technical guidelines for wind energy, and none for solar power,” Odón de Buen, president of Energía, Tecnología y Educación (ENTE), a Mexico City-based consulting firm focusing on energy and environmental projects, told IPS.

“And the laws on renewable energies have been useless,” he said.

Under the “law on the use of renewable energy sources and financing for the energy transition”, which entered into effect in 2008, a 200 million dollar promotion fund was established, as well as a 300 million dollar fund for technological research and training. But the funds have been slow to get off the ground.

Some 850 MW of wind power, 20 MW of solar energy and 958 MW of geothermal energy are produced annually in Mexico.

But the potential of alternative energy sources is hardly tapped in this country – something that could change, since the United Nations declared 2012 the International Year of Sustainable Energy for All.

One of the goals of the U.N. global initiative Sustainable Energy for All is to double the share of renewable sources in the global energy mix.

In Mexico, the goal set in 2009 by the government’s Special Programme for Renewable Energies is for 7.6 percent of all energy produced in Mexico to come from alternative sources in 2012. This portion does not include electricity produced by hydropower plants with a generating capacity of over 30 MW.

Wind energy output in this country could reach 20,000 MW by 2020, according to projections by the energy ministry.

And in the field of solar power, average solar irradiation in Mexico is five kWh per square metre, making it one of the countries in the world with the greatest solar energy potential.

Under the National Energy Strategy that the government has sent to Congress for approval, 35 percent of the country’s total energy would be generated by renewable sources by 2026.

But “the goals aren’t realistic, because they don’t talk about how this will be achieved,” Professor Eugenia González at the Colegio de la Frontera Norte college in northern Mexico, told IPS.

“Besides, there have been problems with the evaluation of the environmental impact of the projects,” added González, lead author of the book “Hacia la sustentabilidad ambiental de la producción de energía en México” (roughly “moving towards environmental sustainability in energy production in Mexico”), published in 2011.

Barriers to the promotion of alternative energy listed by the National Energy Strategy include high initial costs, long payback times, natural resources often located far from the power grid, and a lack of financial incentives.

“Lighting in small communities could be provided by solar energy, but public power distribution grids would first have to be established. However, the cost of the technology has been going down. In the medium term, it will be cheaper to generate energy with renewable sources,” said de Buen.

The government is carrying out a national inventory of renewable energy sources, which will help identify opportunities for development of the sector and will make it possible to conduct technical and economic evaluations of these sources of energy.

“If the authorities grant a permit (to the wind farm in Cozumel), we are going to visit universities and schools to talk about what is happening and organise huge protests, because they are deceiving us,” said Álvarez.

“Without its environmental wealth, the island will die,” because it basically depends on tourism, said the Cielo, Tierra y Mar activist, who carried out a reconnaissance flight over the island in mid-February.

The environmentalist and nine other people sent a letter to the administration of Felipe Calderón asking it to deny the wind farm a permit. The government responded by ordering an investigation by PROFEPA, Mexico’s federal agency for environmental protection, which could block the project if it finds any irregularity.