Protests in Southern Chile Spread to Other Remote Regions

SANTIAGO, Mar 23 2012 (IPS) - Protests in the southern Chilean city of Puerto Aysén over the region’s isolation and high local prices of fuel and food have spread to other isolated regions of the country. 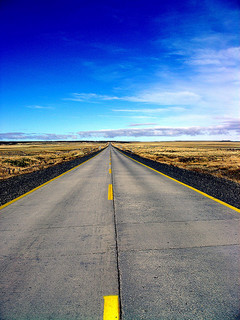 People in remote areas like this in southern Chile are demanding an end to neglect by the central government. Credit: Jeremy Vandel/CC BY 2.0

Residents of the northern cities of Arica and Calama have now taken to the streets to press their economic demands, calling for a boost for local development, and decentralisation.

“Regional uprisings have come of age in the past decade. This is a rebellion that we could see coming, which has been incubated, and is gaining strength,” anthropologist Juan Carlos Skewes told IPS.

The protests in Aysén, 1,640 km south of Santiago, started on Feb. 18, demanding improved economic conditions for regional development, better road transportation to the region, priority distribution of the profits earned from exploiting natural resources like gas within the region, improvements in local health and education services, and subsidies to off-set the high cost of living in one of the most inhospitable parts of the country.

The next demonstrations broke out in Arica, on the northern border with Peru and Bolivia and 2,050 km from Santiago. A peaceful street march was held Saturday Mar. 17 to protest “years of neglect by the central government.”

Then Calama, a poor mining town, was the scene of protests Tuesday Mar. 20 aimed at securing five percent of the profits from copper mining to pay for regional infrastructure. Copper exports are Chile’s main source of revenue.

“Today, Calama is building a social process,” said Mayor Esteban Velásquez. “Some people might be sceptical, but we are coming up with serious political and social proposals and ideas in our northern town and shaking off the centralism that suffocates us.”

The previous day, Velásquez and the mayors of 13 ‘comunas’ or municipalities in the north of Chile raised the issue of decentralisation as an urgent priority and delivered a seven-point petition to rightwing Chilean President Sebastián Piñera at the government palace of La Moneda.

“This unrest was to be expected, and will no doubt increase in the coming months. This is a good thing because big upheavals have the effect of widening avenues for democratic participation,” Skewes said.

According to Skewes, who is head of the anthropology department at the Alberto Hurtado University in Santiago, events in Puerto Aysén are sending a clear message to other regions that it is possible for their voices to be heard.

He said the demonstrations would no doubt continue as long as there is no concrete response to ensure equitable distribution of resources across the nation and democratic elections for regional authorities.

Chile’s regional governors and provincial authorities are appointed by the central government. Only mayors, at the most local level of government, are elected by direct popular vote.

“Basically, this social discontent and public unrest is happening outside the channels of political representation – in other words, political parties and their local representatives – because people are not getting satisfactory solutions from them,” Skewes said.

In response to the Aysén protests, the government has given top priority to a bill for the election of regional councillors, but Congress has warned that the legislation will not be approved in time for regional elections to be combined with the municipal elections in October.

The regional demands are longstanding and local people say they are used to being neglected. But they have found themselves caught up in an unequal battle.

In Aysén, heavy-handed police action against demonstrators has been denounced by human rights organisations and lawmakers.

Tension soared on Monday Mar. 19, when the government sent additional ship- and plane-loads of ‘carabineros’ (national police) special forces, to establish order and quash the protests.

Demonstrators in Aysén set up roadblocks to prevent the passage of police vehicles, and a pitched battle ensued. Witnesses reported that police fired rubber bullets into the faces of protesters and tossed tear gas and stones into local homes.

“On several nights it was like coverage from a war,” journalist Claudia Torres of the community radio station of Santa María de Aysén, one of the main media outlets in the region, told IPS.

“The repression has been violent and cruel; there are stories about people being beaten, shot and arrested, and some women were stripped naked in front of male police officers,” she said.

Torres added that the community radio station has witnessed police brutality in the region. “We have seen what the streets look like afterwards, as if there were a real war on.”

In view of the allegations of excessive use of force by the police, the state National Human Rights Institute (INDH) took out a court injunction to protect local people, especially children and teenagers.

Hinzpeter held talks in La Moneda for more than three hours with social leaders from Aysén on Thursday Mar. 22. The two sides agreed to continue the dialogue, under certain conditions.

The government asked for an end to the roadblocks, while Aysén representatives demanded the withdrawal of the special police forces and the shelving of 22 lawsuits filed against activists by the executive branch, invoking the national security law.

“We live in hope that the government will understand that the social movement wants to be heard. But I think this is just another ruse by Minister Hinzpeter to try to defuse tensions and make it appear that he is willing to talk,” Torres said.

In Skewes’ view, the present Chilean authorities “do not have the political culture or the experience to know how to deal with conflicts.”

He said that “outbreaks of social disorder have their own cycles, and there comes a time when the conflict turns against its own protagonists, and that produces apparent détente.”

But he said calm will only return to the regions when concrete measures are taken in favour of decentralisation and improved living standards in remote areas.

“Demanding rights and expressing anger through civil unrest are what happens when restrictions are placed on people amid inequality of opportunities and neglect. The deep contradictions within Chilean society give rise to complaints as simple as people’s feelings of not being recognised or appreciated,” he concluded.