SANTA, Cameroon, Apr 23 2012 (IPS) - Olivier Forgha Koumbou washes some freshly picked carrots in a small brook and eats them with relish. His thriving farm in Santa, in Cameroon’s North West region, looks like a miracle in the midst of surrounding farms where carrots, lettuce, potatoes and leeks have withered and died. 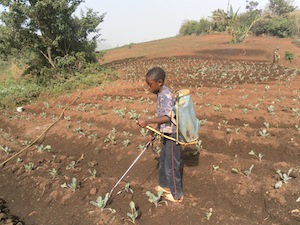 Rains fell lightly here in early March, but it was not enough to prevent the sun from withering the crops as traditional methods of irrigation failed because of the low rainfall. In the North West region the average annual rainfall stands at just 380 mm, but it is meant to be between 1,000 to 2,000 mm. “The farms have failed me this year,” 43-year-old farmer, Tembene Tangwan, tells IPS.

He explains that because of the low rainfall he cannot use his traditional method of irrigating his crops.

“We used to pipe water from a higher altitude to our farms, and used sprinklers for irrigation. But now, the water sources are drying up, and the low pressure in the system cannot carry water through the pipes,” he says.

“We can only pray that the rains will come back,” he adds.

But his neighbour, 32-year-old Koumbou, is not sitting back and putting his hands together in prayer to ask that the rains return. As he weeds through his crop of carrots, he proudly says: “We develop new strategies when we are faced with an additional challenge.”

Instead of standing back and watching his crop wither, Koumbou began water harvesting.

“I discovered that during the night, the volume of water in the nearby stream increases. So I bought containers to store water in, and at night I take my farm workers to collect it. The water is then used during the day to irrigate the crops,” he tells IPS.

Koumbou is already setting a trend, and other farmers are now starting to follow his methods. “It’s the only way out,” says Christopher Neba, who has also begun water harvesting.

Koumbou has been cultivating carrots, potatoes, cabbages, lettuce and leeks for the past 25 years. He says that his mother introduced him to farming at a tender age.

“When I turned seven, I began accompanying my parents to the farm. I have remained a farmer ever since.”

Today, he makes an average profit of just under 5,000 dollars annually. But this year he believes he will make even more.

“The fact that many farmers lost hope and abandoned their farms means that prices will rise significantly this year, and that means more profit for me. I do sympathise with my neighbours, but that is how things stand for now,” he says.

While there are no concrete figures available of how many farmers have given up on farming, it is not a welcome development in a country that largely relies on food imports.

Cameroon spends an average of 122 million dollars a year to import rice, sorghum, and millet. Last year, shortfalls in rice production led to the importation of 80,000 tonnes, which cost 240 million dollars.

This comes amid rising food insecurity in the country. The United Nations World Food Programme says that 400,000 people in Cameroon’s north require 40,000 tonnes of food aid to avoid going hungry.

“We have told farmers to limit their farmlands to at least 15 metres away from water sources. But very often, they farm right on the riverbeds, destroying the vegetation that protects these water sources and, therefore, water levels are bound to drop,” he tells IPS. Awah believes a solution to the dwindling water supply will come when farmers begin to protect water sources. “Farmers must immediately stop farming too close to streams, brooks or wetlands,” he says.

Koumbou has heeded the appeal.

“It is our fault that water sources are drying up,” he says. “We discovered that the marshy lands here were so fertile that we cultivated them without thinking of the consequences. Gradually, the water receded, and now we are paying the price. This year, I did not cultivate the marshy land on my farm and that is why I still have some water.”

Meanwhile, the regional department for agriculture also believes water harvesting is a short-term solution for farmers.

“As a matter of urgency, we plan to construct water storage facilities so that the little available water can be harvested and stored for eventual use by farmers to irrigate their crops,” Awah says. He adds that a long-term strategy is to plant trees that can help protect water sources.