ABALA, Niger, Apr 25 2012 (IPS) - It was the middle of the day when Tabisou, 72, suddenly saw people from her town of Amderamboukane in Mali fleeing for their lives. Her family had no time to pack their things; the fighting had already begun. 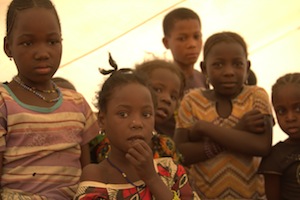 “Everything I have worked for over my whole life was lost. Just like that,” says the elderly woman who comes from a family of farmers as she sits in a United Nations Refugee Agency (UNHCR) tent at the Abala refugee camp, 85 kilometres from the Mali-Niger border. “We had to leave all our animals and food.”

Tabisou is one of nearly 270,000 refugees who have had to flee their homes since January, when conflict erupted in northern Mali. That had begun after hundreds of Tuareg mercenaries, formerly hired by slain Libyan leader Muammar Gaddafi to fight alongside him, returned to Mali after he was toppled, with heavy weapons, to restart their own five-decade-old rebellion.

The National Movement for the Liberation of Azawad (MNLA) claims to fight against the marginalisation and oppression of the Tuareg people in northern Mali. The Tuareg are a Berber people of the desert and traditionally are nomadic and have long complained that the Malian government has marginalised them.

Tabisou does not care much for the MNLA’s grievances. “I am an old lady, and have many grandchildren,” she says pointing to the gaunt and dirtied children’s faces gathered around her in the tent. “The rebels do not care about us, they treated us very badly.”

Tabisou claims the rebels came into her home, waved guns in her face, and asked all the children to line up outside. “I thought they were going to kill us, luckily two of the rebels told the others to calm down.”

According to UNHCR representative Mariata Sandouno most of the refugees have fled due to fear of the various armed groups.

“Most of them said that they fled out of fear, also due to ongoing looting by bandits, and the withdrawal of the national army has made them feel insecure,” explains Sandouno. The army withdrew from Amderamboukane in January when the rebels seized control of the town of 3,000 people.

“Also some refugees said it was a very confusing scenario as they were not able to distinguish which of the groups armed men belonged to.”

The refugees come from the Haussa, Tuareg and Songhai ethnic groups. According to Ibrahim Ag Abdil, a 30 year-old pastoralist, few of the people in the camp support the MNLA’s cause. The MNLA is an umbrella term given to groups of armed Tuaregs who have come together with the declared goal of administrating an independent state, Azawad.

“Mali is already a very poor country, we have to rely on the United States, the United Kingdom and Europe for aid,” he explains. “The MNLA are just making more divisions. How can we survive as two countries, when we are barely surviving as one?”

Ag Abdil says the MNLA stole all the motorbikes belonging to civilians in his town of Amderamboukane. After the MNLA left, he says, bandits entered the city and looted all the shops and homes.

“We don’t know if there is even anything left,” he tells IPS. “The MNLA are not protecting civilians’ possessions, they are just attacking towns, leaving them, and then the place is empty for bandits to come and steal.”

Next to him, Ajawa, 72, nods his head. “They say they fight for all the Tuaregs but in fact they only fight for a few, many Tuaregs don’t support them,” he says. “Now we’re stuck in this camp. It is painful to see my people begging for handouts, and our children not able to go to school.”

When the MNLA arrived in Amderamboukane, the citizens fled the eastern Malian town and walked two months to find refuge in Niger. When these refugees first arrived, they stayed in a makeshift camp at Sinegodar, 10 km from the border.

“We were always worrying about warmth at night, and food during the day,” says Salima, 19. Several of the children in Abala camp are visibly malnourished, and NGO workers are concerned about potential epidemics.

There are currently 6,286 refugees at Abala camp out of an estimated 26,500 who have fled to Niger. The rest are in Burkino Faso and Mauritania, while there are over 80,000 internally displaced inside Mali. UNHCR will soon open more refugee camps in Mangaize and Ayorou, both towns in Niger.

According to Antonio Jose Canhandula, head of UNHCR’s emergency team, the biggest concern for the agency at the moment is that the refugees are entering a food crisis in Niger.

“These refugees are coming into a food crisis in Niger, which will aggravate the situation here,” says Canhandula. “They are nomadic people, coming with cattle and other animals, so we are trying to adapt to their needs and minimise the burden on the host community, who are already facing a famine and water shortage.”

UNHCR reports that there are currently 300 urban refugees in Niamey. Most of the refugees coming through Niamey are government members who have travelled from Gao in Mali. They are seeking assistance to return to Bamako, Mali’s capital, and reunite with their families, collect salaries or just show they have not abandoned their jobs since the Mar. 22 coup that overthrew the government. There are also reports of military staff fleeing to Niamey in order to return to Bamako.