SAN JUAN IXTENCO, Mexico, Apr 4 2012 (IPS) - Catalina Salvador, an 87-year-old peasant farmer who grows pumpkins, beans, and above all corn on her small plot of land, was one of the opponents of transgenic crops who took part in the traditional corn festival in San Juan Ixtenco in the central Mexican state of Tlaxcala. 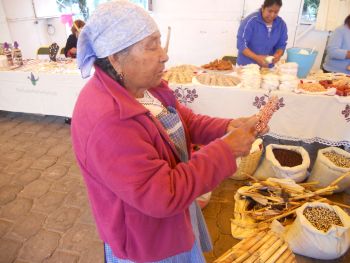 “We just planted, and we hope the September harvest will be a good one,” Salvador told IPS at the second “Ngo r’e dethä” (in the Ñahñú language) corn festival, held Sunday Apr. 1 in this town 188 km southeast of the capital.

Dozens of peasant farmers, academics and activists, along with members of the general public, attended the festival, one of the 150 that take place in Mexico every year to celebrate corn, which has strong symbolic value from Mexico to Nicaragua.

Visitors could taste a wide array of dishes prepared with corn, from the omnipresent tortilla to regional varieties of sauces like “mole prieto”, a stew that is highly seasoned with chilli.

There were also rugs made entirely of white, yellow, red and blue kernels that showed off the diversity of corn in this Latin American country, which has at least 75 varieties of the crop – a unique genetic treasure.

“The decision to introduce transgenic crops was reached at high levels of the national government, independently of whether it destroys the natural balance of the most important crop for humanity,” Alejandro Espinosa, a researcher at Mexico’s National Institute of Forestry, Agricultural and Livestock Research (INIFAP), complained to IPS.

“It was a political decision,” said Espinosa, who has developed more than 30 hybrid species at INIFAP and more than 12 at the public National Autonomous University of Mexico (UNAM), for production by small companies and distribution at the local level.

In February, a group of scientists met with Francisco Mayorga, the minister of agriculture, to express concern over the introduction of transgenic crops.

But the government has turned a deaf ear to such concerns.

The ministry of agriculture has issued at least 140 permits for experimental cultivation of transgenic corn and three pilot projects, the stage previous to commercial-scale planting.

Similar trials are being carried out with wheat and soy, while transgenic cotton has been planted commercially since 2009.

Experience with GMOs in other parts of the world, like the United States or Europe, could provide useful lessons for Mexico.

In a letter sent in early March to Steven Bradbury, deputy director of the U.S. Environmental Protection Agency’s office of pesticide programmes, 22 U.S. experts on corn pests pointed out that the western corn rootworm (Diabrotica virgifera virgifera) was growing resistant to Bt corn.

“We are troubled about the immediate implications of these observations for the durability of pyramid toxin rootworm-protected corn, as well as their potential long-term impact on corn production,” the seven-page letter says.

And in the study “A controversy re-visited: Is the coccinellid Adalia bipunctata adversely affected by Bt toxins?” published Feb. 15 by the journal Environmental Sciences Europe, a team of six Swiss researchers concluded that the toxin in Bt corn kills the larvae of the ladybug (Adalia bipunctata L), an insect that is beneficial for crops because it eats pests.

Mexico produces some 22 million tonnes a year of white corn on 7.5 million hectares of land, and imports 10 million tonnes, according to the ministry of agriculture.

Corn is also the chief crop of another elderly peasant farmer from Ixtenco, 76-year-old María Solís.

“That’s how we were raised, and we have to continue this tradition. The best corn for planting is white corn, but I grow that one year and plant another colour the next year,” Solís, who also plants beans and chilacayote squash on her three-hectare farm, told IPS.

In Ixtenco – which means “on the shore” in the Náhuatl tongue – farmers save seeds, swap them with other growers, and sell them in the local markets. As in the rest of the state of Tlaxcala, widely considered the birthplace of corn, farmers are getting ready to resist the introduction of transgenic seeds.

This indigenous town and its surrounding fields represent the diversity of corn in Mexico, because 18 varieties are planted here, two of which are endemic, according to a study by Narciso Barrera, a researcher at the Autonomous University of Tlaxcala, and Cristina Sánchez, at the Colegio de Tlaxcala.

In their 2011 study “La variabilidad de semillas de maíz nativas como expresión de la diversidad biocultural en Ixtenco, Tlaxcala” (The Variability of Seeds of Native Corn as an Expression of Biocultural Diversity in Ixtenco, Tlaxcala), they concluded that the broad variety of corn and its uses was the result of a complex body of knowledge, agricultural practices and worldviews.

The permits granted to grow GMOs “are not only illegal in a number of ways, but ignore international commitments and obligations,” said Lizy Peralta with the Grupo de Estudios Ambientales (GEA – Environmental Studies Group).

“Based on international law, the cultivation of transgenic crops should be restricted, because they have not been proven to be harmless,” she told IPS.

“Corn has many cultural and dietary meanings, and this cannot be ignored. It maintains a social structure and sense of community in farming areas,” said Peralta, who was also at the Ixtenco festival.

“We would love to carry out serious research that would help determine whether or not there is a tolerance threshold beyond which native species of corn reach a level where they cannot survive. But industry will never be interested in that,” Espinosa said.