MÁLAGA, Spain, Apr 5 2012 (IPS) - Environmentalists and local authorities are opposed to prospecting for oil in the waters off the Canary Islands, one of Europe’s leading tourist destinations and an area with great potential in the field of renewable energy. 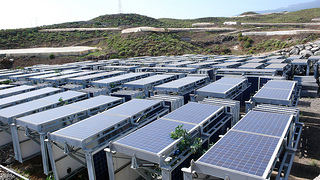 Planned oil exploration 60 km off the coasts of the islands of Fuerteventura and Lanzarote “threatens the environment and the (tourism-based) economy” of the archipelago, the Canary Islands commissioner for self-government and institutional reform, Fernando Ríos, told IPS.

On Mar. 16, the government of centre-right Prime Minister Mariano Rajoy decided to grant permission for oil prospecting in the Canary Islands, in an effort to reduce Spain’s dependence on foreign oil, based on the argument that oil drilling will bring enormous benefits to the islands and to the country as a whole.

“If the forecasts are confirmed, Spain could produce 140,000 barrels a day of oil, equivalent to 10 percent of the country’s total consumption,” said Minister for Industry, Energy and Tourism José Manuel Soria in an interview broadcast on the state radio station Mar. 28.

Soria noted that Spain depends on foreign imports for 99.8 percent of its oil needs, which means that discovering oil within the national territory “would be the best economic news in 50 years for the Spanish energy sector.”

Repsol YPF, the company that is to do the prospecting, issued a communiqué saying that the oil and gas industries would diversify the economy of the Canary Islands and would create new jobs.

According to the Economically Active Population Survey, the Canary Islands, one of the 17 autonomous communities that make up Spain, had the second highest unemployment rate in the country in 2011 at 30.9 percent, surpassed only by Andalusia’s 31.2 percent.

Ríos does not believe the prospecting and possible future oil production will create local jobs, because “highly specialised personnel are needed.”

He complained that the Canary Islands “would bear all the costs and receive none of the benefits in the short and medium term,” and said the drilling platform would have a useful life of “only 20 years.”

Repsol YPF announced that if the indications were proved correct, it would be the biggest hydrocarbons discovery in the history of Spain.

However, an environmental impact assessment is required and will take at least two years to prepare.

The head of the Canary Islands government, Paulino Rivero, said Madrid’s decision to give the green light to prospecting was unfair, “because it serves just one purpose: to benefit a private company… The central government treats us as if we are a colony lost in the Atlantic.”

Sara Pizzinato, in charge of the climate change and energy campaign for the Spanish chapter of environmental watchdog Greenpeace, maintained that oil exploration off the Canary Islands coasts, near the maritime border with Morocco, is “a risky and above all, unnecessary, experiment.”

She told IPS, “The deeper the exploratory drilling, the greater the risks, inexperience and improvisation” involved.

If the environmental impact assessment is approved, exploratory wells would be drilled to a depth of between 3,000 and 3,500 metres, according to a Repsol communiqué.

The Spanish government and Repsol YPF claim that tourism and the oil industry are not incompatible.

Ríos, in contrast, stressed that “prospecting is incompatible with sun-and-sand tourism.” Minister Soria, however, said they can be “made perfectly compatible, as they are in other parts of the world.”

Thanks to the powerful attraction of white sand beaches and crystal clear waters, tourism represents more than 30 percent of GDP in the Canary Islands. Real estate and tourism together account for the 2.1 percent growth of the islands’ economy in 2011, compared to 2010, according to the National Institute of Statistics.

Thousands of local residents of all the islands of the archipelago, especially Lanzarote and Fuerteventura, took to the streets Mar. 24 to protest against plans for oil prospecting, and to call for safe, clean energy sources.

Ríos pointed out that because of the region’s exceptional climate, it has developed significant renewable energies and still has great potential for more. “In the Canary Islands, it is cheaper to produce clean energy than oil,” he said.

“The Canaries could be the Saudi Arabia of renewable energy,” said Pizzinato.

Over 20 percent of Spain’s shoreline, where vast renewable energy resources are concentrated, corresponds to the Canary Islands. Wind and wave energy are captured on the south and north of the islands, respectively, as well as solar power.

“We have plenty of wind and sun. We want the government to think about the future and we want investment in renewable energies,” said Valerie Delecroix, a tourist guide on Lanzarote, declared a World Biosphere Reserve in 1993 by the United Nations Educational, Scientific and Cultural Organisation (UNESCO).

Oil exploration also poses “a risk to our health,” said Delecroix, as Fuerteventura and Lanzarote both get their drinking water from desalination of seawater.

However, the oil company insists that it has the necessary technology and experience to carry out deep sea drilling and respect the environment at the same time.

Pizzinato remarked, “Oil industry spokespersons say this because they do not have to pay if an oil spill occurs, since all the legal responsibility is borne by the Ministry of Development – in other words, by every citizen.”

She recalled the 2011 leak from an oil rig operated by Repsol YPF, 50 km from the beaches of the Spanish city of Tarragona, and the 2010 oil spill in the Gulf of Mexico which caused damage to some 950 km of coastline in the United States.

Pizzinato said the drilling is also incompatible with curbing climate change, since extracting fossil fuels from under the seabed emits greenhouse gases, responsible for global warming.