BEYIN, Ghana, Apr 18 2012 (IPS) - Sam Kojo stands in a thigh-high pile of brown seaweed that blankets a beach in western Ghana. Behind him, a decomposing mound of Sargassum stretches down the shore past the fishing village of Beyin. 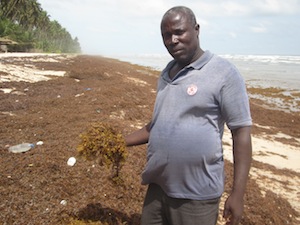 Sam Kojo, chief fisherman of a village in western Ghana, says an influx of seaweed has crippled the fishing industry for months. Credit: Jessica McDiarmid/IPS

“Ever since I was born, I have not seen this,” says Kojo, holding a clump of the seaweed in his hand. He has been fishing since he was 10 years old, but since the weed began washing in about three months ago, he has been unable to work.

“We have a big problem because when we cast our nets, all the weeds would come inside the net and we would catch nothing,” says Kojo, through a translator. “So we decided not to continue fishing.”

Sargassum is the algae after which the Sargasso Sea – an elongated region in the middle of the North Atlantic Ocean – is named due to the large accumulations there. In the past year, it has been showing up in unprecedented quantities on beaches from the Caribbean to West Africa, wreaking havoc on tourism and fishing industries.

It started collecting on the beaches of western Ghana about three months ago, locals say. And in Beyin, it is bringing this small fishing village of a few hundred people to its knees.

Kojo says that with the boats kept ashore, people are going hungry and families can no longer pay their children’s school fees. He says theft is increasing along with the desperation.

His son Raymond says they saw the Sargassum floating on the water a few days before it hit the shores.

“For months now, we haven’t gone to sea,” says Raymond. “We’re hungry. Here, there are no other jobs.”

Beyin has a fledgling tourism industry. It serves as the launch point for trips to Nzulezu, a stilt village in the area that draws several thousand visitors a year. But fishing remains the main source of income.

Ernst Peebles, an associate professor of biological oceanography at the University of South Florida, says in an email that mats of Sargassum accumulate wherever ocean currents take them. The influx in Africa and elsewhere probably does not reflect increased local growth of Sargassum.

“More than likely, it is an indication that oceanic currents or eddies are closer to shore than usual. Persistent onshore winds can also help create such accumulations,” he adds.

In 2011, the eastern Caribbean was ridden with Sargassum, which plastered beaches at popular tourist destinations such as Antigua and Barbuda, Barbados and St. Martin. Some resorts closed down while tonnes of the algae were removed. In some areas people were warned not to swim due to the risk of getting tangled in the weeds. Sierra Leone, northwest of Ghana, also experienced an influx in 2011.

Brian LaPointe, who has studied the algae since the 1980s, said Sargassum circulates continuously between the Sargasso Sea, the Caribbean and the Gulf of Mexico, where it is picked up by the Gulf Stream current and can move east to the Azores, and even to West Africa.

Scientists are not sure what has led to the recent increase in the amount of Sargassum in circulation, said LaPointe, an expert at the Harbor Branch Oceanographic Institute at Florida Atlantic University in the United States.

“This is a very widespread phenomenon,” says LaPointe. “Almost every corner of the North Atlantic is reporting really large amounts of Sargassum.”

Nutrient levels in the ocean, particularly near shore, are increasing due to human activities such as fertilisation and the dumping of sewage, which in turn lead to faster algae growth.

The 2010 oil spill in the Gulf of Mexico may also play a role, says LaPointe, by further increasing nutrients the algae feed on. Hundreds of millions of gallons of oil spewed into the water after BP’s Deepwater Horizon rig exploded on Apr. 20, 2010.

“Last year, following the Deepwater Horizon spill, is when we saw this mass influx of Sargassum to a number of areas.”

LaPointe also points to a 2010 temporary change in currents in the Gulf of Mexico. A current “short circuited,” creating the Franklin Eddy, which meant outflow from the Gulf virtually stopped for months.

A blessing for those scrambling to contain the oil spill, the eddy also may have served as a “big incubator” for Sargassum, says LaPointe.

About six months after the eddy broke down, reports of large amounts of Sargassum began coming in.

“This could contribute more Sargassum not just to the west of the Atlantic, but the Azores and Africa as well,” he says.

LaPointe is working with researchers at the University of South Florida to monitor Sargassum movement via satellite imaging, in order to alert local managers of an imminent landing.

Back in Beyin, Ghana, the shore at Tenack Beach Resort is piled high with foul-smelling Sargassum, interlaced with the usual debris: plastic bags, flip-flop sandals, bottles, and other rubbish.

“We tried to clean it but this is beyond us,” says Awuku. “It has to be tackled at a national level.”

He is quick to point out that, while Sargassum is affecting the resort, it is the fisherpeople who are really suffering.

“The bulk of the people in this area rely on the sea for their livelihood, which is fishing,” says Awuku.

Some fishers with deep-water boats are going far out to sea to get beyond the algae, but the added cost of fuel for the longer trip is crippling.

Kofi Agbogah, deputy director and programme coordinator at the Coastal Resources Center in Takoradi, a city about 160 kilometres from Beyin, calls the algae a “food security issue.” The centre studies a more common form of green algae that is also damaging local fishing.

“If fishermen cannot fish because of the presence of this green algae, or brown algae, it means that their children are going to go hungry, their pockets are going to be empty, their wives cannot go to the market.”