GOROKA, Papua New Guinea, Apr 6 2012 (IPS) - In the Kamanabe area of the rural Eastern Highlands in Papua New Guinea (PNG), a village gang has relinquished crime and is striving to contribute to the sustainable future of the local community with a honeybee income generating initiative. 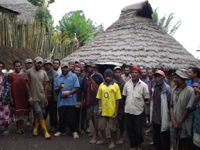 With a population of just 4,000, Kamanabe village is situated at the end of an unsealed track leading from the main highway. Public services are limited with the nearest aid post six to seven hours away, and most people live by subsistence with few avenues to generating cash incomes.

Due to land in the village area being unsuited to growing crops, the cultivation of marijuana has flourished. This has brought in money to the community, which suffers from lack of development and economic opportunities, but its trade and consumption have also contributed to illegal activities.

Villagers afflicted with drug and alcohol abuse formed a local gang, commonly known as ‘raskols’ in PNG, and engaged in carjacking, violent mugging and extortion, targeting traffic on nearby roads.

An assessment of armed violence in PNG conducted by the Geneva-based Small Arms Survey, with support from the United Nations Development Programme (UNDP), in 2006, found rapid population growth, limited economic and employment opportunities and inequality to be contributing factors to criminality.

Access to public services for many is restricted with less than half the provincial population living within five km of a national road.

But a spokesperson for the police constabulary in Goroka, the nearest major town, advised that the number of reported crimes along the highway in the vicinity of Kamanabe village, had significantly decreased, with no serious incidents recorded since January this year.

There is likely to be a link between this trend and the fact that Felix Masi, former gang leader in Kamanabe village, is now chairman of the Herave youth group, with membership comprising his former comrades who have decided to relinquish crime.

Recognising the destructive consequences of their outlaw existence, the group is now working to improve the future prospects of their community with an income-generating project involving honeybee cultivation.

“We decided to change our lives, to contribute to our community and do something meaningful with our lives,” Masi explained. “The soil is not good, the land is not arable in our area, and it is not good for growing many crops. So we think honey production is a good income-generating activity.”

Elizabeth Kelly, development co-ordinator with ‘Strongim Pipol Strongim Nesen’ (Strengthen the People, Strengthen the Nation), a community development partnership programme between the PNG and Australian governments, is assisting the youth group to develop the project idea and a proposal for funding.

“The group itself is made up of people who lived a life which was not wanted by the community,” Kelly said. “The benefit of the project is that it will help them to earn a living, help them to look after themselves and sustain their lives.

“They feel that this project does not need a lot of land space or resources, and little labour is required,” she continued, “They also see the market is there.”

Although honey is not yet a major industry in PNG, the climate is very conducive to honey production in the Highlands.

During the past two years, the Eastern Highlands department of agriculture and livestock and the Livestock Development Corporation, have been actively promoting the potential of the fledgling industry, especially for a sizeable domestic market.

The Herave youth group has over 100 members, who have paid a joining fee which entitles them to participate in the project, make decisions and reap the benefits.

Approximately 35 families in the village will directly benefit from the honey project. One beehive has the potential to produce 30 kg of honey and youth group members could earn up to PNG kina13 (six dollars) per kg.

Kelly emphasised that the idea of the project originated with and was unanimously supported by the group.

“We are just facilitating the process,” she clarified. “We are helping to put it together in a participatory manner, but they will own the project. They have to be able to manage the project themselves, to sustain it.”

Gender equality will also be a key feature of the initiative with husbands and wives working together.

“The group is made of men and women,” Kelly elaborated. “Membership is strengthening the family unit, primarily the husband and wife. The project is owned by families and they want to see that women are equally involved in the project and respected.”

“Women will learn the same skills as men,” Masi confirmed. “They will work at the same tasks and also make decisions in the project.”

This is an important factor in a nation where, according to the Organisation for Economic Co-operation and Development, women “lack equal access to education and lag behind men in terms of employment opportunities” while also facing significant challenges to achieving financial independence.

Ultimately, the chance of a productive livelihood has brought harmony to the Kamanabe community.

“It is making our people happy,” Masi said. “There is no longer drug abuse, and law and order problems, and we can earn a decent income.”