Breaking the Silence on Racism in Cuba

HAVANA, May 17 2012 (IPS) - Gloria Rolando has been revealing hidden chapters of Cuban history since the 2010 premiere of the first part of her documentary series “1912: Breaking the Silence,” about the virtually unknown story about the only legal political party to promote racial equality in this country. 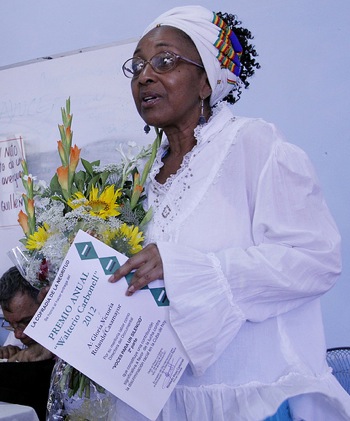 Gloria Rolando received the Walterio Carbonell prize in 2012 for her contribution to the fight against racism. Credit: Jorge Luis Baños/IPS

The documentary-maker defends the legacy of the Independent Party of Colour (Partido Independiente de Color), which was active from 1908 to 1912, and is a recurring focus of debates among activists for non-discrimination in Cuba.

The second part of the series, produced independently, is being shown in community and institutional locales, and will hit Havana movie theatres this month.

A century after the slaughter of the main leaders of the Independent Party of Colour, and as the International Decade for People of African Descent gets underway, Rolando, who also heads the autonomous video-makers’ group Imágenes del Caribe (Images of the Caribbean), talked with IPS about the need for teaching another side of history, and the importance of the family in achieving racial equality.

A: This series is aimed at all Cubans, because it addresses a complex chapter of our history, involving both blacks and whites. The film helps us to understand a troubled period, which is studied in school in a very schematic way.

When the ambassadors in Cuba from member countries of the CARICOM (Caribbean Community) saw the film, they were fascinated. They had come here without knowing about this fundamental chapter of Cuban history, which is also part of the development of the Caribbean.

That was a time of generalised repression. A person was treated with prejudice simply for being black or mixed-race. For that reason, the events of 1912 were silenced: people knew that they could face problems for telling the truth. That is how the version that endured until now was a distorted one, and many historians do not talk about the events as they actually happened.

The Independent Party of Colour

Led by two veterans of the third war for independence, Evaristo Estenoz and Pedro Ivonet, the Independent Party of Colour was created to fight against racism in the nascent Republic.

On May 20, 1912, the party’s top leaders organised an armed protest against a decree that prohibited the party from running candidates in the elections. The protest ended in the massacre of more than 3,000 black and mixed-race people and the imprisonment of survivors by the authorities.
Q: What has been the impact on the Cuban public?

A: The first reaction is lack of knowledge: that has been the hook for getting people to continue to watch the film. When the first part premiered, people became hooked. I was able to identify that effect in places where it was shown, such as Havana’s main movie theatres.

Generally speaking, nobody knows about the history of the Independent Party of Colour, or about the massacre of many of its members. I am basing my work on that. We (the production crew) want people to learn about the facts and then evaluate that part of national history and its consequences for the present.

Q: At what point in the public debate over non-discrimination in Cuba did your series come out?

A: These questions are the focus of a lot of movement these days: there are different types of publications and there is a visible debate. Hopefully the polemic will expand beyond academic circles. At least, that’s been the case in the capital, which is the environment I know best.

The issue became a boomerang in the 1990s, but now we are beginning to address it in a theoretical and scientific way, so that people can understand that it is not an emotional issue.

It is essential for all of this information to be made available in the public education system. My goal is not just to make the documentary and show it, but also for the recovery of the memory of the Independent Party of Collour to be incorporated in teaching.

My greatest hope, once the third part is done and the project can be presented as a whole, is for it to be shown on the programme “Pasaje a lo desconocido” (Journey into the Unknown, a Cuban television programme that airs on Sundays and features documentaries), which has a large audience.

That way, it will no longer be an issue that is unknown to the Cuban population and that stirs up controversy. I also hope for it to be seen in community spaces, and it is being passed around informally so that people will use it, learn and tell others.

The first part of "1912: Breaking the Silence" was broadcast on "Mesa Redonda" (Cuba's nightly political talk show), and was shown in the country’s main movie theatres in 2010.

The second part has been shown in places such as Havana’s Casa de las Américas cultural centre and La Ceiba community centre. Rolando is now working on the third part of the project.
Q: Do the conditions exist in Cuban society today for recognising that racism persists here? And if so, why?

A: Cuban society is many-sided and very complex. Life in Havana is totally different than life in Holguín (700 km east of the capital), for example. In some of the provinces where we worked to make the series, people commented to us that they didn’t have those problems.

In fact, Cuba is different in the central and eastern regions. There is the Haitian presence that came with a huge wave of immigration in the early 20th century. In Guantánamo, where a large part of the population is black, it might be that they don’t feel the need for this debate as intensely as in the capital or in the western part of the island in general.

However, racial discrimination is also related to economic status, housing, the neighbourhood, food and structures for organising activities that certain population groups experience.

To try to eliminate it requires very complex actions. It’s not enough to have free education and health services for all. Services for families and a return to family values play a fundamental role.

Q: What proposals have you identified for contributing to greater racial equality in Cuba?

A: There needs to be a television programme devoted to the Cuban family. The diversity of families needs to be shown — the ones that live in Baracoa (in eastern Cuba) or in Miramar (a residential neighbourhood in Havana) – to see how different people live their lives.

It could invite, for example, a sociologist who has researched the Havana neighbourhood of Pogolotti, or historians and other specialists who address the real problems faced by Cubans.

It could focus on a plan of action to ensure that many black girls and boys reach university. The doors are open to them, but few of them make it there. To make that possible, housing conditions and family history are two of the decisive factors. (END)