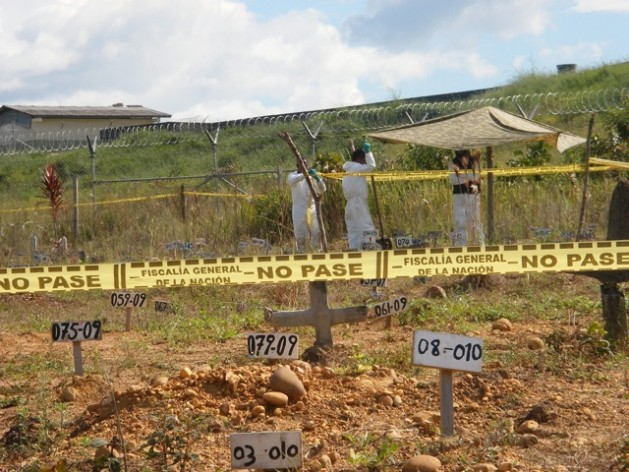 Hundreds of families hope the remains of their missing loved ones will be found in cemeteries like this one in La Macarena in central Colombia. Credit: Constanza Vieira/IPS

BOGOTA, May 23 2012 (IPS) - There have been “few tangible improvements” in human rights in Colombia, says Amnesty International’s new report, which also points to legal loopholes that ensure impunity, as well as government attacks on court rulings.

This is the situation in Colombia as described by the global rights watchdog in its annual report, released Wednesday at its London headquarters.

“In its discourse, the Colombian government (of conservative President Juan Manuel Santos) has demonstrated a commitment to human rights, and it is clear that his stance on the issue has been more constructive than that of the previous government” of the right-wing Álvaro Uribe (2002-2010), Amnesty International’s Colombia researcher Marcelo Pollack told IPS.

“The international community has welcomed what it interprets as the government’s commitment to human rights, and the fact that the dialogue with human rights organisations is more respectful than in the past,” he said.

“However, I believe it is still very aware of the serious difficulties that Colombia continues to face in terms of human rights, and of the fact that successive Colombian governments have failed to implement decisive, effective measures to put an end to the abuses,” Pollack said.

“The human rights situation is still critical. The rise in homicides related to the question of the restitution of land has been particularly worrisome,” he added, referring to one of the Santos administration’s flagship programmes, which involves the restoration of land to families displaced by the armed conflict over the last few decades.

The Amnesty International report stresses that the main factor in the violations of basic rights is the civil war between government forces, far-right paramilitaries and left-wing guerrillas.

“More than 45 human rights defenders and community leaders, including many working on land issues, and at least 29 trade union members, were killed in 2011,” it adds.

After the partial demobilisation of the paramilitaries between 2003 and 2006, many of them regrouped in what the government now refers to as “bacrim” (short for “criminal bands” in Spanish), which continue to be tolerated by the security forces in some regions.

According to the Corporación Nuevo Arco Iris, a Bogotá think tank, the bacrim share territory and illegal profits (from drug crops, for example) in different parts of the country with the Revolutionary Armed Forces of Colombia (FARC) or the smaller National Liberation Army (ELN) – depending on which insurgent organisation is predominant in any given region.

Amnesty International says all of the forces involved in the war have attacked civilians.

“Impunity persisted in the vast majority of cases, exacerbated by threats against and killings of witnesses, lawyers, prosecutors and judges,” it says.

The rights group warns that “Congress was also debating measures which could allow human rights abusers, including members of the security forces, to benefit from de facto amnesties.

Pollack told IPS that “several bills that have government support and are under debate in Congress, such as a reform of the military justice system and a ‘legal framework for peace’ would mark, if they are approved, a setback for the few advances achieved in the last few years in terms of bringing at least some victimisers to justice.”

Amnesty says one of the reforms aims “to extend the military justice system’s role in investigating human rights violations in which the security forces were implicated.”

But the military justice system does not have a good reputation among activists because, as Amnesty states, it “regularly has closed such investigations without a serious attempt to hold those responsible to account.

“If passed, this measure would be contrary to international human rights standards which state that human rights violations should be investigated exclusively by civilian courts.”

It also says the number of “false positives” is once again on the rise. This term refers to the army’s practice of killing young civilians and passing them off as guerrilla casualties in the counterinsurgency campaign. This “body count” system uses incentives like weekend passes, cash bonuses, promotions and trips abroad to reward soldiers and officers for “results” in the country’s nearly five-decade civil war.

Although human rights defenders in Colombia have been documenting and denouncing the phenomenon of “false positives” for decades, it was not until the international community expressed outrage in 2008 that the practice, which had become much more widespread under Uribe, was curbed.

“At least 17 extrajudicial executions by security force personnel in which the victim was falsely presented as a ‘guerrilla killed in combat’ were reported in the first half of 2011,” the report says. This reflected an increase from 2010, when 12 such killings came to light.

The majority of the 1,741 cases registered in 23 years, including the ones investigated by the attorney general’s office, “remained unresolved,” Amnesty states.

It adds, however, that “Progress was made in a limited number of key human rights cases.”

But Amnesty mentioned two cases in which Santos lashed out at judges who convicted and sentenced human rights violators.

One of the cases occurred in April 2011, when a judge sentenced retired general Jesús Armando Arias to 35 years in prison for the forced disappearance of 11 people in 1985, after the army stormed the Supreme Court building, which had been occupied by the M-19 guerrillas (which disbanded in 1990).

Most of the 11 people worked in the courthouse cafeteria. They were filmed leaving the burning building alive, but were never seen again. According to prosecutors and witnesses, they were taken to a nearby building and interrogated.

“The government and the military high command both made statements criticising his conviction and that of retired Colonel Luis Alfonso Plazas Vega, sentenced in 2010 to 30 years’ imprisonment in the same case,” Amnesty says.

Santos also complained when the sentence handed down to Plazas was upheld on appeal in February 2012.

In March 2011, the judge presiding over the case of a military officer accused of raping one young girl, raping and killing another, and killing her two brothers, was shot to death in the eastern province of Arauca, the report notes.

NGO assisting the victims’ families received a telephone death threat soon after the killing, as did the family of the three siblings.

The family of the three murdered siblings was threatened, and fled the region. Although the case involves a common crime, the officer was defended by an association of private lawyers specialising in representing members of the military, whose offices are located in army installations.

“The Justice and Peace process made little progress,” says Amnesty, referring to the 2005 laws that governed the demobilisation of the paramilitaries. Under this process, “some 10 percent of the more than 30,000 paramilitaries who supposedly demobilised can qualify for reduced prison sentences (a maximum of eight years) in return for confessing to human rights violations,” it adds.

The remaining 27,000 were never investigated and “received de facto amnesties. By the end of (2011) only 10 paramilitaries had been convicted under the process; most had appeals against their convictions pending at the end of the year,” the report says.

In February 2011, the Constitutional Court ruled that Law 1424, designed to grant de facto amnesties “to tens of thousands of supposedly demobilised rank-and-file paramilitaries if they signed a so-called Agreement to Contribute to the Historic Truth and to Reparation, was constitutional,” it concludes. (END)