May 15 2012 (IPS) - Everlyne Wanjiku, a single mother of five, has earned a living selling vegetables in the sprawling Kibera slum in Nairobi, Kenya, for over three decades. And even though her earnings were meagre, she was able to provide all her children with a tertiary education. 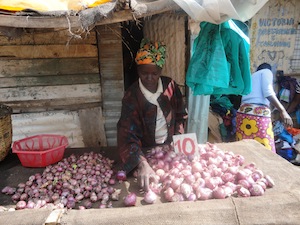 Everlyne Wanjiku, a single mother of five, has earned a living selling vegetables in the sprawling Kibera slum in Nairobi, Kenya, for 30 years. Credit: Brian Ngugi/IPS

But now, like her many fellow poverty-stricken slum dwellers in this East African nation, she is feeling the pinch of the high cost of food and other commodities, which have skyrocketed globally. And Wanjiku says that she is unable to afford her family’s upkeep.

“Most of my daily customers no longer come to buy from me because of the prohibitive food prices. As you can see, I have not replenished my stock because the little savings that I had have already run out,” she says, pointing to the few vegetables on a table outside her shack dwelling.

Janet Adhiambo, one of her customers, says life is just as hard for her.

“It’s a pity that I can no longer buy basic ingredients, like onions. I just choose to forgo them because they are too costly. It’s just too tough,” she says.

The woes of both women are all too familiar to Kenyan families as they struggle to put food on the table in the face of unprecedented high food prices here.

However, these food insecurity challenges are being faced by all Africans, as highlighted in a new report by the United Nations Development Programme (UNDP), which paints a gloomy picture of the food situation on the continent.

The report, which was released on Tuesday, May 15, by the UNDP in Nairobi, decries what is says is the paradox of Africa being agriculturally endowed, but still acutely food insecure.

“The Africa Human Development Report 2012 ‘Towards a Food Secure Future’” notes that despite the impressive growth by African economies over the past decade, sub-Saharan Africa is still plagued by food insecurity.

“More than one in four Africans are undernourished, and food insecurity — the inability to consistently acquire enough calories and nutrients for a healthy and productive life — is pervasive. The spectre of famine, which has virtually disappeared elsewhere in the world, continues to haunt parts of sub- Saharan Africa,” says the report.

It continues: “Yet sub-Saharan Africa has ample agricultural land, plenty of water and a generally favourable climate for growing food. And in the last 10 years many African countries posted world- beating economic growth rates and became among the fastest movers on the Human Development Index.”

These two jarring paradoxes form the basis of the findings of the report, which goes on to pass a harsh indictment on African governments, saying that they have failed to embrace and institute the right policies.

“Sub-Saharan Africa has abundant agricultural resources. But shamefully, in all corners of the region, millions of people remain hungry and malnourished — the result of glaringly uneven local food production and distribution and chronically deficient diets, especially among the poorest,” says the report.

It says that despite a decline in poverty in the 2000s, almost half of sub-Saharan Africans still live in extreme poverty.

Last year, the Horn of Africa was struck by famine and food insecurity, which affected some 9.5 million people.

According to Tegegnework Gettu, the head of the UNDP Africa bureau and an assistant U.N. secretary- general, the chronic food insecurity in sub-Saharan Africa mainly stems from decades of poor governance.

The Permanent Secretary in the Kenyan Ministry of Agriculture Romano Kiome admits that African governments are not doing enough to stem food insecurity.

He cites the example of Kenya, where he says that the Ministry of Finance in its 2010/2011 yearly national budget allocations set aside 539 million dollars for agriculture in government bodies such as the Ministries of Water and Irrigation, Environment and Mineral Resources, Livestock and Fisheries, and Trade.

This amount was less than five percent of the government’s total national budget and contrasts sharply with the allocation to the Kenyan military, which was reported to be 685 million dollars in 2011.

Gettu says spending priorities in some African countries need to urgently shift from the military to agriculture, to help the continent escape the perennial trap of food insecurity.

“If some African countries can acquire and deploy jet fighters, tanks, artillery and other advanced means of destruction, why should they not be able to master agricultural know-how? Why should Africans be unable to afford the technology, tractors, irrigation, seed varieties and training needed to be food secure?” he asks.

With the right policies and institutions, however, Gettu argues that Africa can sustain a virtuous cycle of higher human development and enhanced food security.

“Africa can extricate itself from pervasive food insecurity by acting on four critical drivers of change: greater agricultural productivity of smallholder farmers; more effective nutrition policies, especially for children; greater community and household resilience to cope with shocks; and wider popular participation and empowerment, especially of women and the rural poor,” he says.

Gettu concludes that: “Africa has the knowledge, the technology and the means to end hunger and food insecurity. But still missing have been the political will and dedication.”

Kiome concurs, saying that even though there is no magical solution to the issue of food insecurity, African governments need to do more by investing in agriculture.

“We have the knowledge, the capacity, the right people. But we do not have enough political will to implement the right policies that will see us achieve food security,” says Kiome.

He says that even in the African island nation of Mauritius, over 50 percent of irrigable land is irrigated. This is high compared to the rest of Africa where only 10 percent is under irrigation.

“When countries achieve food security, it is because of the implementation of the right policies,” says Kiome.

Calestous Juma, a Kenyan professor who is an internationally recognised authority on the application of science and technology in sustainable development worldwide, agrees.

“There is no single bullet or panacea in tackling food insecurity in sub-Saharan Africa,” says Juma, who is presently a professor at the Harvard Kennedy School.

The report calls for “smart subsidies,” which would encourage smallholder farmers to shift to high-yield crop varieties without saddling the state with long-term costs. It says that this can energise food production and markets.

“Boosting productivity requires more fertilisers and seeds, stronger research and development, and a more coordinated and responsive extension system staffed by experts versed in the behaviours and habitats of local farming communities,” the report says.

It also states that attracting young Africans to participate in agriculture will bring new energy and ideas to its development.

“Technology and innovation can create enticing and profitable openings, enterprises and occupations along the value chain of a sector that young people have come to denigrate as a backwater,” it says.