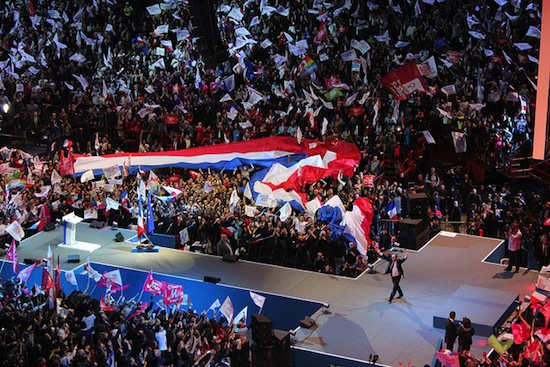 François Hollande at a massive rally just prior to his election victory on May 6, 2012. Credit: Ps-soisy/CC-BY-ND-2.0

BERLIN, May 7 2012 (IPS) - The voting out of conservative governments in France and Greece this weekend heralds the end of harsh European austerity programmes and ushers in an era of new economic, investment, and social policies aimed at restoring growth and employment across the continent.

In France, the Socialist presidential candidate François Hollande, a champion of government-led economic growth and employment strategies, accomplished a comfortable victory over the incumbent president Nicolas Sarkozy – the man often seen as the poster child of the austerity programmes in practice all over Europe.

In Greece, citizens penalised the two strongest, traditional parties, New Democracy and the Pan- Hellenic Socialist Movement (PASOK), for their recent technocratic coalition government that has imposed a severe austerity plan on the country, which deepened the five-year-long recession and ignited a steep increase of unemployment and poverty

Instead, Greek citizens cast their ballots with the Coalition of the Radical Left, which obtained 17 percent of the votes, the Communist party (8.4 percent), and yet another Leftist party (six percent). A neo-Fascist group also obtained a minor, but substantial share of the votes.

Particularly Hollande’s triumph in France is seen as the turning point in the current economic paradigm in the continent. During his speech immediately after the election, Hollande said that his triumph was seen across Europe “as a relief, a hope, the confirmation that austerity is not a call of fate” for the continent.

He added that his mission would be “to give Europe a dimension of growth, of employment, of prosperity” for all.

Hollande, who for the next five years will be ruling over the second largest economy in Europe, also announced that during the next weeks, and at the next European summit scheduled for Jun. 24, he will argue before the European Union and the government in Germany that cuts in public spending, far from contributing to a solution of the sovereign debt crisis in the eurozone, have aggravated the problem of public finances in practically every European country.

For the past two years Germany and the EU, together with Sarkozy, have been pivotal in conceiving the austerity programmes imposed upon the governments in Greece, Italy, Portugal, Ireland and Spain.

Charactertised by drastic cuts in public spending, pensions, social welfare programmes and salaries, these policies have so far only sharpened the economic crisis, prolonging recessions, worsening poverty and even increasing mortality rates among the elderly.

Economic performance, as measured by gross domestic product (GDP), has shrunk in Greece by 17.3 percent since 2007; in Ireland by more than seven percent; in Italy by 6.7 percent; in Portugal by almost six percent and in Spain by four percent.

During his victory speech, Hollande insisted that his government will focus on “social justice and restoring hope for the youth.”

German chancellor Angela Merkel said last week that she now envisions “a growth amendment” for the austerity programmes that her government has consistently forced upon Europe for two years.

In a public speech on May 5 in Brussels, Rehn actually went as far as to say that the austerity fiscal rules in practice in the EU are not a “straightjacket” and that they allow “considerable scope for judgment” by national governments to implement growth policies.

Rehn also admitted that many EU and eurozone member states are suffering from a “severe recession and rising unemployment.” He added that under certain conditions, additional public investment in surplus countries, such as Germany, “could be beneficial to reduce macroeconomic imbalances” within the EU.

Even the head of the ECB, Mario Draghi, urged on May 4 that growth be put “back at the centre of the (European) agenda.” Such a call is extraordinary, given that the ECB mandate focuses solely on an extremely low inflation target, and has routinely ignored unemployment and growth deficits in the eurozone.

Leftist European parties across the board see all this as a welcome change. According to Sigmar Gabriel, leader of the German Social Democratic Party, Hollande’s triumph in France means, “Europe will take a new economic orientation, towards growth and employment. That’s excellent news.”

In a press conference on May 7, Gabriel condemned “Angela Merkel’s cuts plans, which have pushed Europe deeper into the crisis. What Europe now urgently needs is a coordinated policy, a collective plan against youth unemployment,” he said.

Gabriel added that the electoral results in Greece showed that that the austerity programmes needed to be accompanied by “social measures to cushion their impact on society.” Furthermore, he said, “Greece needs much more time to solve” its sovereign debt and economic crisis.

In Spain, Alfredo Pérez Rubalcaba, the leader of the Socialist Workers‘ Party (PSOE), called Hollande’s triumph “a great hope, the beginning of a new era.” Pèrez’s deputy, Elena Valenciano, said that Hollande embodies “a new European Union, one of solidarity and equal rights for all.”

Under Hollande, France will be a “wall of protection against the neoliberal policies that have brought us to the present crisis,” Valenciano added.