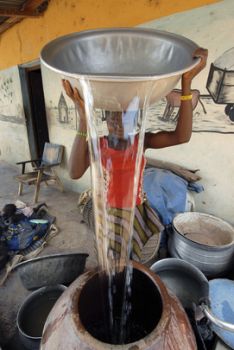 The assessment predicts that water in shared basins will increasingly be used as political leverage. Credit: UN Photo/Ky Chung

A declassified version of the document, which looks forward through 2040, suggests that “during the next 10 years, water problems will contribute to instability in states important to U.S. national security interests.”

According to one of the assessment’s lead authors, Major General Richard Engel, water-stressed countries, being forced to focus on pressing internal issues, are increasingly unable to support U.S. policies and strategic interests.

While the assessment does not foresee water being a main instigator of state-to-state violence or state failure in the next decade, beyond that “water in shared basins will increasingly be used as leverage.” In addition, “water shortages and pollution probably will harm the economic performance of important (U.S.) trading partners.”

The Global Water Security assessment is the result of a request made by U.S. Secretary of State Hillary Clinton in 2011. Clinton has previously stated that water and sanitation constitute the two most basic of development priorities.

The end result of the intelligence community’s research is not a comprehensive global look at the issue. Rather, it focuses on seven river basins between the Nile and the Mekong for which there is a “clear intersection of risks of availability and U.S. strategic interests”, according to Casimir Yost, the director of the Strategic Futures Group at the National Intelligence Council, which authored the report.

At the public launch of the assessment, Engel admitted, “The intelligence community went into this project reluctantly. When we looked into it, however, we realised that this was a top-level national security issue.”

For the United States, he suggested, one of the opportunities in the coming decades will be to make available to the rest of the world the country’s expertise in water management.

Indeed, doing so has increasingly become a U.S. priority. The assessment comes on the heels of the creation, in March, of the U.S. Water Partnership, a public-private body likewise devoted to mobilising U.S. water-related knowledge.

There is general agreement that the U.S. does have a role to play in, for instance, providing and fostering scientific understanding on global water-related issues, particularly as water-related issues could become increasingly politicised in the future, leaving the data open to manipulation.

Still, there is disagreement about how exactly the United States should engage beyond this role.

Some suggest that the United States needs to get its own house in order before feeling confident in offering too much advice to the rest of the world.

“In the U.S., we have very serious concerns about how we have managed out own river systems,” says Alexandra Cousteau, a filmmaker and advocate associated with National Geographic.

“The U.S. has indeed made significant contributions in these issues in the past,” says Ellen Laipson, president of the Henry L. Stimson Center, a think tank here in Washington.

“But now we have to think global: we have to remember that we’re here to solve the problem, not to accrue influence. We have to make sure that these discussions are not limited to Washington.”

Laipson notes that the U.S. government has long had a tendency to be overly reliant on a world vision that focuses on national governments.

“It’s tricky to write this (assessment) within the U.S. government,” she says, “because officials tend to overlook local-level administration as well as supranational bodies.”

According to both Laipson and Cousteau, supranational bodies – such as those made up of governments and stakeholders from throughout a river basin – have proven to be particularly adept at making decisions that balance national security interests with those of local livelihoods and rights.

“Oftentimes, we don’t give enough credit or support to local communities who are coming up with solutions to water-related problems,” she says. “Collectively, these groups are having an impact on water-security issues in their countries – and they can have an even larger impact if they are empowered.”

She also warns that the new intelligence community assessment puts too little concern on the degradation of rivers as systems, including the ecologies and human communities that depend on the health of the system overall.

“It’s these systems, these wetlands, that act as buffers for many of the larger security issues that we’re discussing,” she says. “These river systems mean prosperity for many people.”

Interestingly, history bears out such a view. Despite the omnipresent importance of freshwater systems through the centuries, the historical record suggests that water issues – including water scarcity – have more often than not been grounds for cooperation rather than conflict, including in the modern age.

In a seminal 1998 paper, researcher Aaron T. Wolf wrote that during the 20th century “only seven minor skirmishes” took place, and “no war has ever been fought over water. In contrast, 145 water-related treaties were signed in the same period.”

“These patterns suggest that the more valuable lesson of international water is as a resources whose characteristics tend to induce cooperation, and incite violence only in the exception.”